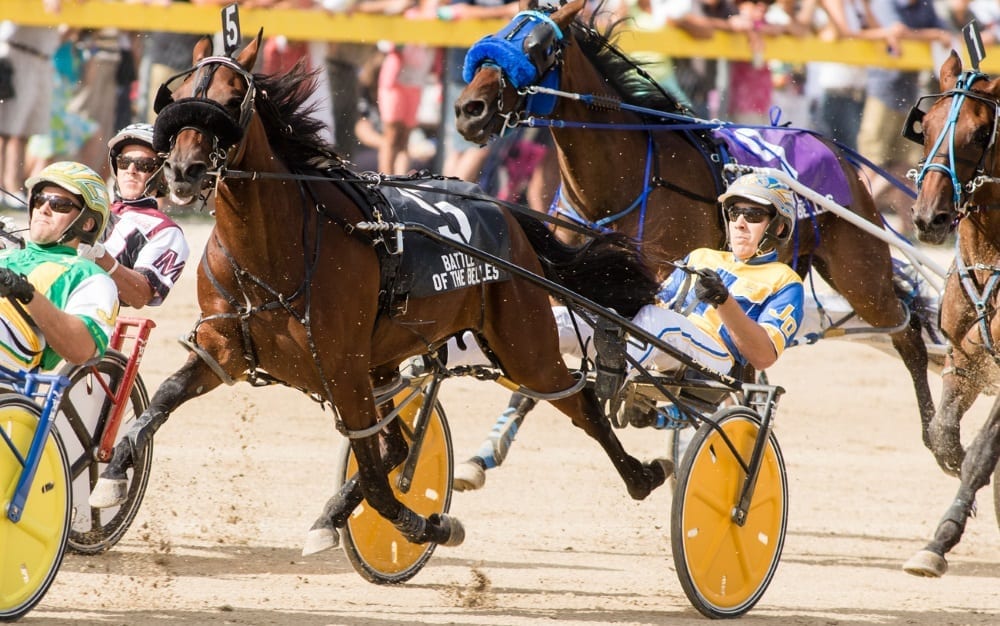 Rising Star in the Northern Sky

After having his best year in the game — including driving Betting Line and winning his biggest race to date — Ontario rising star Jonathan Drury is hoping shoulder surgery won’t curtail his career trajectory.

After having the best year of his life, up-and-coming Ontario-based driver Jonathan Drury is now hoping shoulder surgery won’t stall his career momentum too much. Drury is scheduled to have the surgery Nov. 25 to fix what he calls a “long-term injury.” Doctors have warned him he could be out of the sulky for between three and six months.

“I’m hoping it’s three,” Drury said. “As it is it’s going to stop my year. The year has been great, so far, and it would have been nice to race that last month to see where I would have finished off, but that’s where it’s stopping for now.”

Through Thursday (Oct. 20), the 27-year-old Drury had already surpassed his career best earnings total, with more than $1.9 million earned (by USTA accounting) — Standardbred Canada figures, which consider Canadian and U.S. currency at par, have Drury at over $2.5 million — in just over 1,000 starts.

A week ago, Drury won the biggest race of his nine-year career when he piloted Arsenal Seelster to a 46-1 upset in the $250,000 Ontario Sires Stakes (OSS) Super Final for two-year-old pacing colts at Mohawk.

“I’ve never won anything like that and it was unexpected,” Drury said. “I was just hoping I could race (Arsenal Seelster) along and things would unfold enough where I could close and get a piece. He blew right by them there, which was very surprising.”

Drury’s ascension has been helped considerably by getting regular drives for top Canadian trainers Carmen Auciello and Casie Coleman, including the latter’s star sophomore pacing colt Betting Line when David Miller could not make it to Toronto.

Coleman frequently praised Drury this year and said he earned the job by working for her in the mornings and helping to train Betting Line.

Getting to drive the son of Bettor’s Delight—Heather’s Western has been the thrill of a lifetime for Drury. He said he has never sat behind a better horse in his life.

“It seems like there’s no bottom to him. There’s been times that even when I’ve driven him that I thought, ‘It’s going to be tough to catch them from here’ and he does it from ease. He knows where the wire is and he wants to get there first,” Drury said of the pacer who posted his 14th straight victory last Saturday winning his Super Final with Miller aboard.

Drury said getting the first call on many horses for trainer Carmen Auciello, and occasionally driving for three-time defending Canadian trainer of the year Richard Moreau, likely led to the drive on Arsenal Seelster for trainer Colin Johnson.

“I picked up a lot of different horses that somebody maybe picked off. Maybe I wouldn’t have got to drive them a year ago, but I’m kind of an option for them when they needed somebody this year,” said Drury, who has won a little more than 1,000 races lifetime in more than 8,400 attempts. His career earnings are just shy over $10.5 million (just over $12 million according to Standardbred Canada).

Yet, no horse he’s driven has come close to Betting Line, who has earned nearly $1.5 million this year and almost $1.9 million lifetime and sports a mark of 1:47.2 earned on Pocono’s five-eighths mile oval.

“I’ve driven a lot of horses and he’s unbelievable,” Drury said. “It’s really fun. When you tip him out, it’s just like a blur going by them. It’s crazy… Everything about him is impressive. He’s an unbelievable animal and I’ve never sat behind anything like him.

“You would think at a point he would start to get a little tired, but it seems like he keeps getting stronger. It’s really unbelievable. I trained him at Mohawk last week in :52, home in :26. It was just like a walk in the park for him, all by himself. It was a cooler morning. It’s really scary what he can do… I drove Vegas Vacation for (Coleman) a couple of times and he was a really nice horse that had a quick turn of foot, but I don’t even think that they can compare to what this other horse can do.”

Drury said he grew up around horses working in his parents’ stable.

“I used to always come in when I wasn’t in school,” Drury said. “When I finished school, I originally planned to take a year off and then go to college or university to be an architect and that changed quickly. | lost interest (in school). I worked for a few different people — I worked for Anthony MacDonald for a bit and after that I worked for Tony Montini for awhile — and ended up getting my (driving) license and it kind of took off from there.

Drury said he hasn’t set any particular career goals, other than to just keep improving year over year and “hopefully make next year better than this year and keep on progressing. Hopefully I can pick up more drives in the Sires Stakes and some of the bigger races when they’re (in Toronto).”

Yet, in the short-term, that career trajectory will level off while Drury is recovering from surgery.

“(My shoulder injury) was starting to take its toll on me. I need to get it fixed before it’s too late to fix it and I end up missing more time than I need to,” Drury said. “You definitely need that shoulder to drive and it’s just starting to wear on me now.”