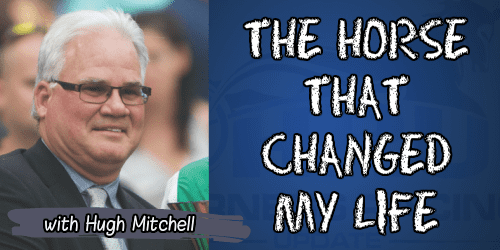 The Horse That Chanced My Life with Hugh Mitchell

(Editor’s Note: This item originally appeared on the Ontario Racing website in 2015 under a section called For The Love Of Racing which still adds new stories weekly.)

One of Canada’s top harness racing executives credits a New Zealand born TV star for stoking his interest in the game.

Cardigan Bay, the kiwi pacer imported to North America by Hall of Famer Stanley Dancer, walked right onto the stage with Dancer on the Ed Sullivan Show on Oct. 13, 1968, just prior to a performance of Good Vibrations by The Beach Boys and a standup routine by Richard Pryor. Some 20 million viewers tuned in to the show.

Hugh Mitchell, the chief executive officer of The Western Fair District in London, ON, was 10 when Dancer leased Cardigan Bay and brought him to the United States in 1964. Mitchell knew Cardigan Bay was a star, but he took more interest in the pacer on the racetrack.

“I saw him in Windsor and Toronto at Greenwood in stakes races,” Mitchell said. “He pretty much raced at Roosevelt and Yonkers in the sixties. He was just one of those horses that dominated, but was very versatile. Half-mile tracks, five-eighths, mile tracks.”

The pacer was eight when he came to these shores. Despite being a veteran already, Cardigan Bay became the first standardbred to earn a million dollars on the track in North America. Not long after reaching the milestone and appearing on the Ed Sullivan Show, Dancer retired the gelded son of Hal Tryax—Colwyn Bay. The legendary pacer was returned to New Zealand with great fanfare with thousands at the harbor awaiting his arrival.

Long before that point, Cardigan Bay was well cemented in Mitchell’s mind.

“He was a horse that I always admired when I was very young in the business for his versatility and longevity,” Mitchell said. “He really got me enthused about racing.

“There’s been a lot of great horses since, but that was just my time in life that he was very impressive.”