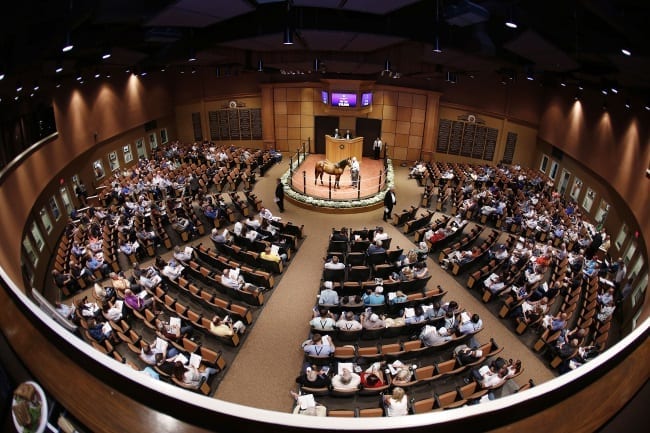 Three Muscle Hill offspring topped the second session of the Lexington Selected Yearling Sale as European buyers bought the two highest-priced yearlings sold. The session average of $70,897 was up 26.5 per cent compared to the second night a year ago.

Led by off-the-charts interest in offspring of Muscle Hill, the sale was also driven by Swedes at the top end.

“(European buyers) were definitely successful tonight and they were also the underbidders on quite a few,” said David Reid, who shares the sale manager role with Randy Manges. “They were definitely strong, very strong, tonight.”

Robert Lindstrom, agent for Lennart Agren’s SRF Stable of Boden, Sweden purchased the second session sale topper — a Muscle Hill colt out of Habit Of Creature named Go To Hill — for $350,000 out of the Preferred Equine consignment.

“I’m thrilled for the breeder,” said Preferred’s David Reid. “Tim Klemencic has been a long-time client of Preferred Equine and I’m very happy to see him rewarded for his hard work. He works hard, he studies the business. He had a horse here last year that I thought undersold a little bit, What The Hill, and he won the Peter Haughton. I really couldn’t be happier for him.”

Counting Tuesday’s gangbusters opening night, the $350,000 bid tied for the fourth-highest price fetched at the sale this year, so far.

Lindstrom led all buyers on day two on behalf of SRF, spending $632,000 on four yearlings. He was followed by fellow Swede Ake Svanstedt who spent $585,000 on five yearlings. Jimmy Takter purchased three yearlings and spent $420,000. Through two days, Takter leads all buyers with $2,030,000 spent on 11 yearlings total. Lindstrom/SRF ranks second through two days with $912,000 spent on six horses, followed by the Burke Racing Stable that has purchased 11 yearlings for a total of $827,000.

The second-highest priced horse from day two was Tae Kwon Deo, a Muscle Hill colt out of Brigham Dream that sold for $240,000 and was also consigned by Preferred, which led all day two consignors with 34 yearlings grossing $2,918,000, an average of $85,824.

The next highest-priced yearling sold was a Muscle Hill filly out of Sterling Volo named Stylish Volo that sold to Emilio and Maria Rosati of Australia for $220,000. Stylish Volo was consigned by Kentuckiana Farms that grossed $1,806,000 for 22 yearlings sold on day two.

Through two days, Muscle Hill leads all sires with a $129,341 average for 41 yearlings sold. Somebeachsomewhere offspring have averaged $129,892 and Kadabra is third with an average of $108,333 for three yearlings.

“The one thing I have heard consistently throughout the week is that individuals are matching up to the pages. Sometimes that doesn’t always work, but so far it’s worked out well,” Reid said. “I feel like the catalog is a little tighter this year… I couldn’t be happier. We just want to keep the momentum going.”

“Right through, the energy has been very positive. The owners and buyers have been very resilient and they are out in force. Lexington has had great success with its graduates and that’s no coincidence because there are buyers here. The catalogue is strong.”

Twenty-nine horses sold for $100,000 or more on day two.
Reid said he is happy for the breeders whose horses have sold well.

“The breeders invest a lot of money and they do it the old-fashioned way. They spend money on mares, they invest in stallions and they take the gamble, so you’re seeing the product that’s paying off for them,” Reid said.

As for whether the sale can continue on a strong note, Reid said he was cautiously optimistic.

“I’m always a little conservative because you can’t keep going up, up, up. But, I think the overall depth of the catalog is stronger and I’ve been saying that
for a couple of weeks now,” Reid said. “That said, we’ll just stay focused because we’ve only sold 230-something head in the sale, so we’re not even halfway there, but I think it’s going to hold up.”

The sale continues tonight through Saturday.