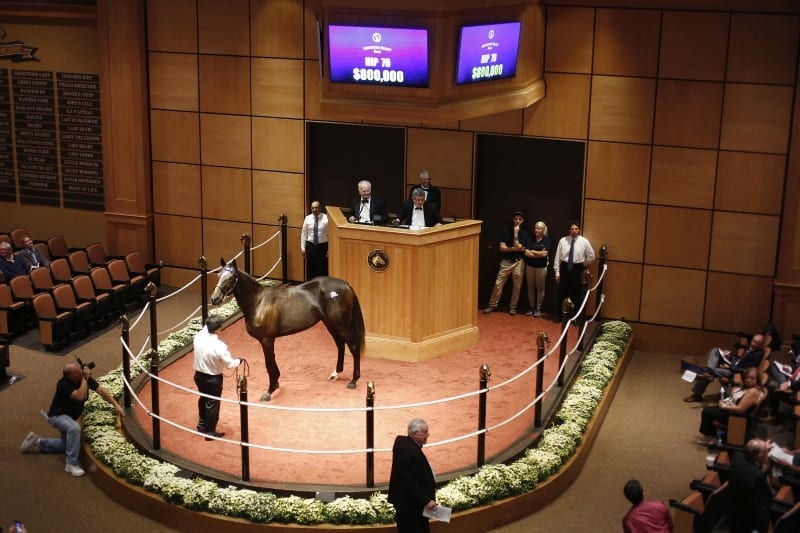 Fireworks from Beginning to End

The opening session of the Lexington Selected Yearling Sale kicked off with a $550,000 yearling and wound up with a $800,000 sale topper that was the most expensive yearling sold in the sale’s history. The opening session average of $129,333 was up 18 per cent from a year ago.

Opening night of the Lexington Selected Yearling Sale started with fireworks and continued popping all Tuesday night (Oct. 4) at the Fasig-Tipton sales facility in Lexington, KY. By the time the dust settled, Mission Brief’s full-brother had topped the session with a bid of $800,000, 17 yearlings sold for $200,000 or more and the average of $129,333 was up 18 per cent over 2015’s average of $109,531.

“It was a great night,” said Randy Manges, who shares the sale manager role with David Reid. “It’s nice to sell one for $800,000 and the sale was up. After a great sale last year, it’s hard to believe it could be up, but it was 18 per cent.”

“Overall, it seemed pretty good,” Reid said. “Gross is up, average is up… I think the average is up significantly, but, you know, when you sell horses at the height of the market, it’s going to be up.”

The $800,000 bid was the second most in harness racing history for a yearling at auction and the most for a yearling sold in Kentucky. Only the $825,000 bid by John Cancelliere for Donato Hanover’s full-brother Detour Hanover at the 2011 Harrisburg sale is higher.

“It’s a group with my brother as the trainer, which is nice,” Steve said. “The last time he trained a sale topper was Andover Hall, who sold for $482,000 in 2000 out of Emilie Cas El’s family. It’s been an amazing night, to say the least.

Bob said he has had the luxury of seeing Tactical Landing grow up at his brother’s farm.

“We’ve watched him for a long time and it’s great when a plan comes together,” Bob said. “It’s an expense, obviously. We were just talking and I’ve never seen bids come in from so many places at a half-million dollars. Usually, it just gets down to a couple of people before then, but there was a lot of live money. A lot of people wanted him at a high number.”

Mission Brief’s trainer and part-owner Ron Burke was the underbidder on Tactical Landing. He said he stopped bidding at $750,000, “which was $150,000 more than I wanted to go.”

“There was all the talk that (Tactical Landing) would be the sale topper, but you’d never dream it would be that much,” said Steve Stewart. “I know that Burke was the underbidder and he came to the farm and he went as far as he could. It’s good for the business when people step up.

It was all part of another tremendous Lexington sale for Hunterton Farm of Paris, KY, which grossed $2.9 million from 11 yearlings sold in the first of five sale sessions that run through Saturday night. Hunterton sold the two highest-priced yearlings, six for prices of $200,000 or more, and averaged $263,636 per yearling.

“It was over the top. I thought we were overloaded, but it hasn’t sunk in yet,” said Steve Stewart, who called it the best sale night Hunterton has ever had at auction.

“We’ve had a lot of good nights, but I would think this is best,” Steve said. “It’s a wild night, to say the least.”

Bob said Tactical Landing is, “just a beautiful horse and he’s got a nice long pastern and very balanced. He’s just the right pedigree and the right individual matched up.”

The sale started with a bang when Richard Young of Boca Raton, FL paid $550,000 for hip #1 to dissolve a partnership.

Young, Joanne Young of Coconut Creek, FL and Craig Henderson of Chicago bred the daughter of Somebeachsomewhere out of their star Rocknroll Hanover mare Put On A Show.

Come See The Show, like the sale topper, was consigned by Hunterton Sales Agency, Inc.

“I can’t believe I spent that much. That’s a crazy price and the whole harness world is going to be watching, apparently.”

The final price was somewhat deceptive because Richard was the two-thirds owner of the horse going into the sale.

“The purpose behind selling the horse was to dissolve a partnership, the idea was to get the horse,” Richard said. “On the other hand, when you get to a certain number you start thinking to yourself, ‘Do I want to go that far?’ because that’s a nice profit.

“The realities are, if I don’t buy this horse, then I say, ‘Okay, am I going to spend $165,000 on another horse and get something that didn’t look as good because I didn’t want to spend on this one?’ Remember, I’m one-third dollars and because of that I said, ‘Okay, $165,000 gets me maybe Captaintreacherous’ sister, brother, whatever, or maybe not.’”

In the end, despite bids flying to the left and right of Young, the owner said he was happy with his purchase.
“She’s a gorgeous filly. She’s out of the best mare that’s been around in a long time. Not too many people would argue that. There are three or four other horses that people might say were just as good (as Put On A Show) in the last 10 years, but not a whole lot of people would say better… and one of them might actually be I Luv The Nitelife,” Richard said of the $2 million-winning pacing mare he owned during her racing career.

The third highest-priced yearling sold in the opening session was the Somebeachsomewhere full-brother to Darlinonthebeach purchased for $450,000 by trainer Jimmy Takter out of David Reid’s Preferred Equine consignment.

It’s definitely the best looking colt, I thought, in this sale,” Takter said. “He’s from a great family. It was a lot of money, you know, but he’s special. It’s not just (Darlinonthebeach), it’s the maternal family. It’s one of the better pacing families in the sport, I think.”

“It is a beautiful horse,” Reid said. “The horse never had a bad day this week. His ears were up, he was bright-eyed and looked like a stallion. He’s got a stallion pedigree, so for the sake of the purchasers and to keep the business rolling here, let’s hope he’s an outstanding prospect on the racetrack because he sure looked the part and has the pedigree to be the part and he’s raised on a farm that has produced numerous world champions before.”

The colt, named Pro Beach, was purchased by the international trio of Bud Hatfield of Columbus, OH, Brixton Medical’s Bengt Agerup of Sweden and Marv Katz of Toronto.

“The best part of this whole thing was that we met this afternoon about 3 o’clock out in the infield here (at Fasig-Tipton),” Katz said. “We took about 30 seconds, we fist pumped each other and said, ‘We’re in, we’re in, we’re in’. We called it our board meeting.”

“It’s one in 20 horses in this price range that makes it,” said Agerup. “But, the family is just so strong.”
Takter was the sale’s leading buyer. He purchased eight yearlings for a total of $1,610,000.

Preferred was the second leading consignor on opening night with 19 yearlings grossing $2,297,000, an average of $120,895 apiece. Both Pro Beach and Captaintreacherous’ full-sister Captain Wench ($230,000 bid by Odds On Racing LLC of Pembroke Pines, FL) were bred by White Birch Farms of Allentown, NJ.

“I’ve said it before and I’ll say it again, credit goes to Michael Parisi,” Reid said of the former owner of White Birch who died last December. “God bless him and White Birch Farm. It’s a happy day, but it’s also a sad day. The farm stayed in place. They made an announcement, ‘business as usual’ and I’m glad to see them rewarded for the road they’ve taken so far.”

“Obviously, Muscle Hill is the dominant trotting sire right now and, on the pacing side, Somebeachsomewhere continues to carry the torch,” Reid said. “You had a lot of sexy pedigrees there tonight with the pacing colts, either from very hot families or first foals out of mares and I’m happy to see the breeders rewarded for investing in mares. That’s the old-fashioned way so I was happy to see them get paid.

“Overall, I’m really happy with the buyers and clientele I saw around here. Obviously, we’re ecstatic with the results and it’s only night one. We’ve got 500 horses to go, but overall I like the tone. I like the activity, the crowd and, more importantly, there’s a lot of nice horses left to sell.”