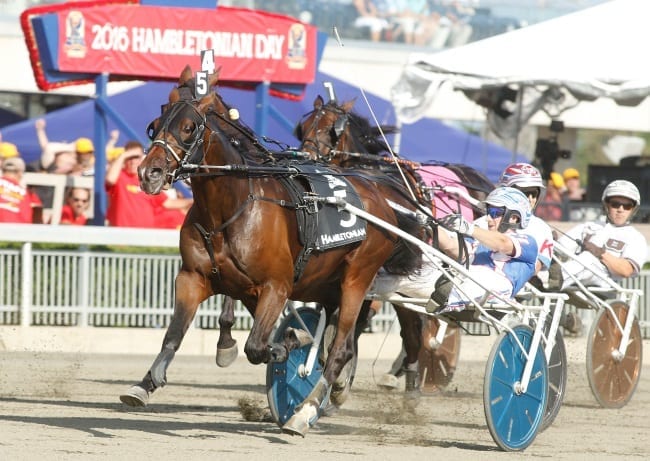 With the focus on harness racing’s “Big Three,” Shamballa proved to be the one in Saturday’s (Aug. 6) $225,550 U.S. Pacing Championship for older pacers at the Meadowlands Racetrack.

Shamballa, sent off at odds of 8-1, upset Wiggle It Jiggleit by one length in a career-best 1:47.1, with Dealt A Winner third and favorite Always B Miki fourth.

Freaky Feet Pete — who with fellow world champions Wiggle It Jiggleit and Always B Miki has made up the “Big Three” this season — launched a first-over bid and the group hit three-quarters in 1:20.3. Freaky Feet Pete looked to grab the lead in the stretch, but Shamballa and Zeron were rolling on the outside.

Shamballa reached the front and then held off a late bid from Wiggle It Jiggleit, who split horses to get up for second.

“A second-over trip made all the difference,” Zeron said. “My dad always told me if you can keep him covered up, he’ll move his little legs as fast as he can all the way down the stretch, and he did just that.

“At the three-quarter pole I was thinking, ‘I couldn’t possibly be in a better spot, I just hope this horse isn’t sick today.’”

Shamballa, a six-year-old son of Somebeachsomewhere—Bolero Takara, has won 23 of 53 career races and earned $683,133. The gelding has won three of nine races this season.