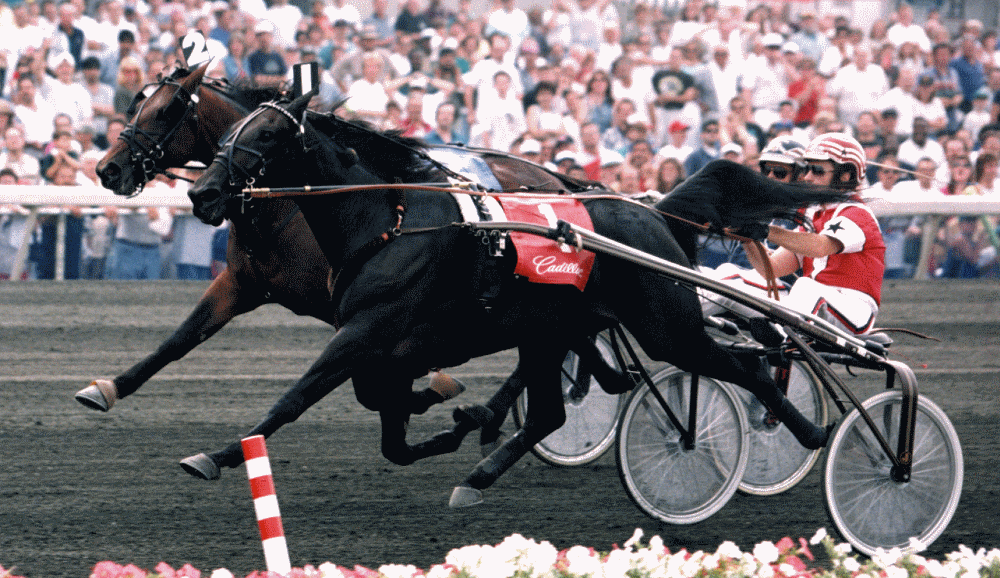 Winning One For The Girls

Celebrating 20 years since Continentalvictory’s stirring victory in the 1996 Hambletonian.

It was an unnaturally warm evening on Sept. 28, 1994, which only exacerbated my intense nervousness. I am a horse trainer and this night began what I called my 1995 draft.

People think that yearling selection is all about luck. While luck certainly plays a small part in yearling selection, experience and hard work are the best assets to have in the quest for success. Valley Victory was the hot new sire and two of his fillies were selling early on opening night at the Kentucky Standardbred sale. Hip #26 Continentalvictory and #47 Act of Grace both were consigned by Brittany Farm and the former was the one I really loved.

I knew the players. I knew my competition. The heavy hitters were basically accounted for. Bill Perretti and Jim Wheeler were more interested in colts and probably more so at Harrisburg. Jules Siegel wouldn’t think my prize had enough pedigree, although he chased that very pedigree years later with little result. David McDuffee, I believed, would also pass on the pedigree. Brittany wouldn’t give what I would, as she was culled by either Gene Riegle or Art Zubrod, most likely the former. That left me with one problem and it was a major one: Stanley Dancer, buying for Bob (I was never an underbidder) Suslow.

I found her pedigree more than sufficient. Her dam had produced two stakes performers by sires that were not exactly household names. I sat behind Stanley as the beautiful rangy black filly entered the ring. I was pleased there was no flurry of bids and at $75,000 the action slowed to a walk. From there to $85,000 they were going very slowly in $1,000 increments. I was going to try and end it, I bid $100,000 and the hammer came down. Continentalvictory belonged to Deena Frost, David Offenberg, Harvey Gold and Kenny Orr and would spend her racing career in the Ron Gurfein stable.

Moments later, when Act of Grace entered the ring, there was a flurry of bidding and she was knocked down to Dancer for Robert Suslow for $125,000.

“Connie,” as Deena named her training down, was a project. She could see something far down the track and run away from it. She was far more interested in her work on the straight track with little to attract her attention. Thankfully, upon her arrival at the Meadowlands, most of this was behind her. She always wore simple shoes and no boots. I trained her barefoot for about a month and then tacked on a light reverse flat steel shoe that she wore here entire freshman year. I trained her in 2:00 at the Meadowlands and like a dope I told one of the owners. Well, when Mike Lachance raced her easy the first few baby races, the animals became restless and were calling him daily to find out what I was doing wrong. Deena, David and Jerry Silva, after he bought in, were always good sports and had a positive outlook on everything and were more than supportive to me. Whereas Harvey and Kenny were cry babies.

How can you be unhappy owning Continentalvictory? Read on, it was not so easy.

Connie raced well her first starts with a hiccup in the Merrie Annabelle and then we went west. First stop Springfield. After a very eventful warm up with roller coasters, tilt-a-whirls and a hubrail to boot, Mike got her around in the less-than-astonishing time of 1:59. John Cashman came over to me and said, ‘I thought she was a better filly than that.’ I said, ‘We will see.’ She won most of her starts out west and then came back east and won the Breeders crown easily. Her last start was to be the Goldsmith Maid at Garden State Park. I had purchased a filly at Harrisburg for Harvey Gold named Elke Frazier, a nice Super Bowl filly that Harvey wanted me to also start in the race. Connie drew inside and Elke drew the 10 hole. I said nothing to Lachance, but I told Peter Wrenn, ‘You have the 10 hole against the best filly in the world. Good luck.’

Well, the man said go and Connie saw something and was on the dead run and didn’t catch back trotting till she was 20 lengths behind. Wrenn kept coming up the inside while Lachance had caught the field and was three deep down the back stretch. There was a photo at the wire. Connie had beaten Elke by a nose — or had she. Her number went up and the crowd entered the winner’s circle. Then came the horrid announcement. They had posted the wrong number. The crowd, in shock, dispersed and Harvey stood alone in the circle. It was a wonderful performance by both horses. I was proud, but ready to turn the page and look forward to a three-year-old campaign that would include taking on the boys if I had my way.

The owners were all game. The two-year-old champion was to embark on a schedule that included all the open races — the Yonkers Trot, the Beacon Course, the Hambletonian, World Trotting Derby and the Kentucky Futurity.

The winter at Sunshine Meadows was good to Connie. Work on the straight track and nice weather enabled her to blossom. Her training companions Mr Vic and Elke Frazier provided more than sufficient competition in her training miles.

Returning north, she cake-walked through the sires stakes and made the Yonkers Trot look like a walkover. Then came the Beacon Course (now the Stanley Dancer), the race that has been my nemesis. Five big favorites, five horses no better than third. But there was a reason. His name was Michel Lachance, maybe the cleverest driver ever. The race was one week before the Hambletonian and he was not going to rough a horse up that close to the Holy Grail of harness racing, no matter what. The inevitable occurred, Mike put Connie in a hole, a place she was not accustomed to, and she finished a weak third to Lindy Lane.

This set up a scenario that was volatile to say the least. Michel drove Lindy Lane and was forced to make a major decision as to whom he would drive come Hambletonian Day. We were to meet for lunch at Il Villagio across from the Meadowlands to discuss the situation. I know to this day Mike thought that Lindy Lane was the better horse and winning with a stud is far more financially rewarding than a filly. I said you can drive the filly and Mr Vic in the eliminations and no matter which one you drive in the final you will get breedings to Mr Vic. In my heart, this really meant nothing to him. I like to think his decision was based on our very caring relationship.

The soap opera was over and the real drama began. The Hambletonian draw was rather weak because of the quality at the top and Mr Vic and Lindy Lane got in the same division, while Continentalvictory was in a soft short field.

My hopes for a perfect day were soon dashed when I was forced to scratch Mr Vic who sustained a career-ending injury warming up. I reported it to George Segal and he was so kind and understanding that it made my day a lot easier.

Both Lindy lane and Connie won their eliminations easily, but not without incident. I had changed Connie’s bridle to pull down blinds (called the Norwegian whip) and after a few recalls caused by Act Of Grace, the blinds fell down behind the gate and she was a little anxious to say the least. She won in 1:52 with Mike holding on for dear life. She really cooled out quickly to my surprise and I have to give credit to her caretaker Marita Berglund who gave her the very best of care. The press was on me like flies asking if she had anything left after that ridiculously fast mile — as if I did this every day and had the correct answer. Naturally I said she would be fine. I was wishing.

I repaired the bridle and asked Johnny Sokol, my assistant, to please position himself at the top of the stretch where the horses turn to go to the gait in case the blinds fell again.

The race itself was more than any fan could wish for, truly one of the most exciting of all time. Continentalvictory went right to the front with Lindy Lane in the two hole. For some reason Chip Noble came from the outside with Tony Oakes. I could see Mike looking right at him and shaking his head and saying something that to this day he has never revealed. At the top of the stretch, Bill O’Donnell pulled Lindy Lane and after the perfect pocket trip looked like he was going right by the filly. Mike asked her for more and she put her tail up in the air and wouldn’t let the colt go by.

I think my heart stopped a few times in the long drive. For Mike and I, it was our second Hambletonian in three years and with all the drama very satisfying. We proceeded to the winner’s circle where a severe argument ensued as to what owners would be where in the picture. Imagine winning this race and being that stupid.

Her next big start was the World Trotting Derby where O’Donnell parked her to the half in :53. However, being as great as she was, she came back and won the final. I think that race ended her career as soft tissue started to unravel in her hind leg.

I was just one of many that loved her and I wish that every horseman had a chance to be associated with a filly as great as she was.

P.S. She was voted Horse of the Year and has recently been enshrined in the Hall of Fame.