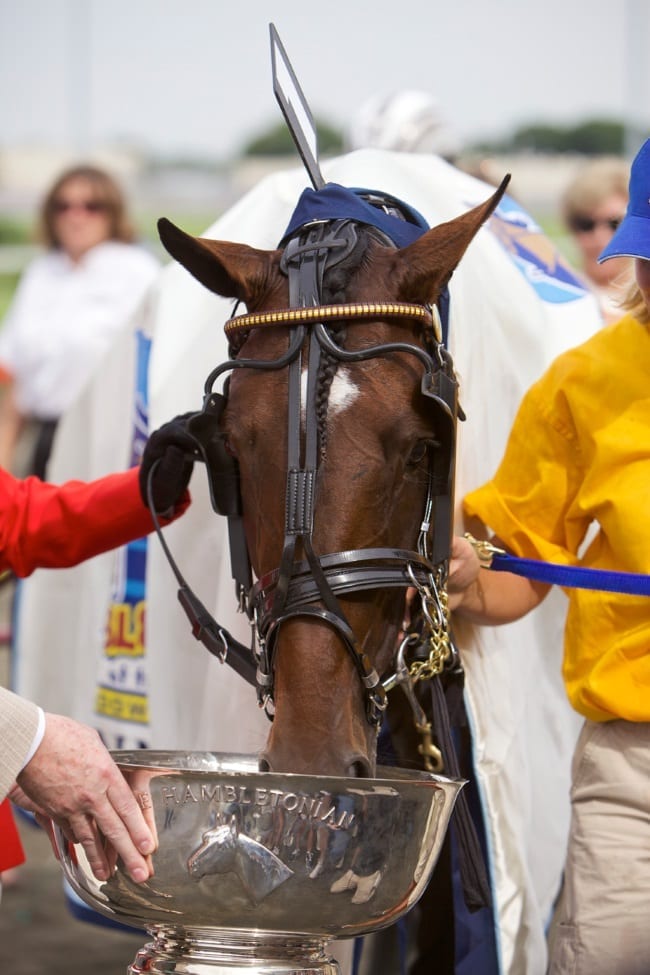 The backgrounds of the Hambletonian boys

This year’s Hambletonian field may not be very colorful, but it sure has muscle power.

It won’t be very colorful because 17 of the 18 starters are bays. (Milligan’s School is brown.) That’s not so usual, of course, in any harness race as the breed has long been dominated by bays and browns with the occasional chestnut or grey tossed in for variety.

Some people have drawn a contrast to thoroughbreds which has many chestnuts — think Man O War, Secretariat, Affirmed, Alydar — and more than a smattering of greys.

I worked at Stoner Creek Stud in the 1970s and one of the foaling men had worked with thoroughbreds. He was astonished at the monochromatic nature of the standardbred.

When one mare had a Meadow Skipper filly, he recorded time of foaling and sex of the foal. In the blank on the foaling card next to color he wrote: “Another damn bay.”

But horse racing is not a beauty contest and the spoils go to the horse that gets to the wire first. And something tells me that on Saturday it will be a son of Muscle Hill.

That’s because six of the 18 starters are sired by Muscle Hill, who has been as dominant in the stallion ranks as he was on the racetrack. He sired a Hambletonian winner (Trixton) in his first crop and his daughter Mission Brief won an elim last year and was second in the final.

Further muscle power comes from Muscle Massive, another son of Muscles Yankee. He is represented by his son Hollywood Highway.

And the grand old man himself Muscles Yankee, now 21, has a Hambletonian entrant in Waitlifter K.

(It should be remembered that Muscles Yankee crushed his foes in the 1998 Hambletonian, and has sired a trio of Hambletonian winners in Deweycheatumnhowe, Muscle Hill, and Muscle Massive.)

Yankee Glide, now 22, has a trio of Hambletonian starters in Lagerfeld, Milligan’s School, and Tight Lines. Yankee Glide won an elim of the 1997 Hambletonian before foot problems undermined his chances in the final.

Donato Hanover, the powerful 2007 Hambletonian winner, has a triple threat working for him in this year’s Hambletonian in Sutton, Reigning Moni, and Make Or Miss.

Explosive Matter, who chased Muscle Hill to no avail during his career, got a bit of vengeance last year when his son Pinkman defeated the Mission Brief to win the Hambo. This year Explosive Matter has a pair of Hambletonian hopefuls in Love Matters and Iron Mine Bucky.

Other stallions with sons in the Hambletonian are Cantab Hall and RC Royalty.

Looking at the broodmare credits among the starters, we find four stallions that have two daughters with sons in the Hambletonian.

The other stallions with daughters that have sons in this year’s trotting classic are Conway Hall, Credit Winner, Donerail, Dream Vacation, Muscles Yankee, Self Possessed, SJs Photo, and Yankee Paco.

For example, Reigning Moni and Lagerfield share the same seventh dam in Claire Sampson, a top filly in her era. Claire Sampson finished 4-4 in the ’61 Hambletonian against colts.

Gleeful Hanover is the fifth dam of Bar Hopping and the eighth dam of Mavens Way. Tight Lines hails from another branch of the same maternal family, which is officially called Mambrino Beauty and oft-called the Nervolo Belle family.

Canny Imp, the stakes-winning daughter of the great Impish, is the sixth dam of Sutton and the eighth dam of Brooklyn Hill.

Marion Marauder and Jimmy William both trace to the foundation mare Maggie H, a foal of 1883, but they come from separate branches of this family.

Love Matters and The Royal Harry are likely outsiders in the Hambo, but they might fool everyone with strong performances.

That would be suitable since both were foaled on April Fools Day. Love Matters arrived in Pennsylvania while The Royal Harry drew his first breath in New Jersey.

April was by far the most popular month for birthdays among this year’s Hambletonian hopefuls. Eight of the 18 claim birthdays in what poet T.S. Elliott termed “the cruelest month.”

March ranks second in foaling dates as six of the Hambletonian horses were born in March, 2013. (Ironically, Southwind Frank was foaled on March 3 and Brooklyn Hill was foaled on March 4. It’s been that way thus far on the track, too: Brooklyn Hill is always behind Southwind Frank. Will things be different in the Hambletonian?)

A quartet of Hambletonian starters were foaled in May, with the latest being Waitlifhter K, a foal of May 24.

No January, February, or June foals in the whole bunch.

The Bluegrass state of Kentucky, traditionally the epicenter of American horse breeding, had three Hambletonian starters take their first steps there.

Maryland and Ohio can each claim a Hambletonian starter this year.

I found it interesting that none of the starters was foaled in Ontario or New York.

If experience counts for anything in the big dance, Milligan’s School should take home the trophy as he’s raced 23 times in his young career, more than any other Hambletonian horse. He started 16 times as a two-year-old, more than a handful of his rivals have raced in their career.

Lagerfeld has raced 20 times, while Dominion Beach and Love Matters have faced the starter 19 times

The greenest of the Hambletonian starters have only 10 lifetime starts, and that consists of the trio Jimmy William, Reigning Moni, and The Royal Harry. For any of them to win would be a real shocker, but owners generally don’t plunk down the starting fee in the Hambletonian unless they have realistic hopes of getting a big chunk of the purse money.

That’s just a quick and quirky review of some stats on the Hambletonian starters. Will it be a Muscle Hill sweep, or will an outsider pick the perfect moment to go the race of his life.

Who do I think will win?