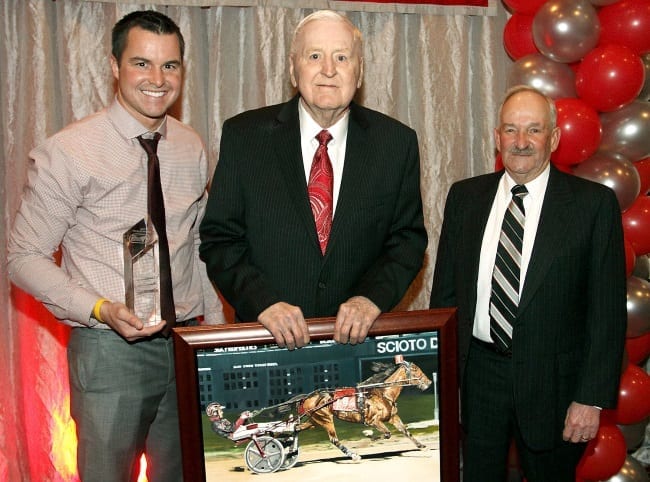 Septuagenarians Keith Ross, 79, and Don McKirgan, 75, have conquered a series health challenges and say Ohio champion Like Old Times gets the credit for extending their lives and rekindling their partnership.

Racehorses aren’t known for saving lives. However, some do get credit for extending lives. And a select few are even commended for inspiring or throwing a financial lifesaver to those who own or care for them.

Like Old Times, a four-year-old brown trotting mare, may be eligible on all counts for what she has done and continues to do for a pair of Buckeye septuagenarians.

Ohio’s 2015 Horse of the Year races for breeder/owner Keith Ross, a 79-year-old businessman from Bellefontaine, OH and Don McKirgan, a 75-year-old trainer-driver based at Northfield Park.

Between the two of them, they have thoroughly tested the medical profession, tallying three arterial stents, two open heart bypass surgeries and a frightful case of Guillain-Barre Syndrome.

Ross and McKirgan have met and conquered their physical challenges and they credit Like Old Times, a winner of 18 of 36 career starts and $350,100, for keeping them healthy enough to continue reaching for condition and entry sheets.

“She has been good medicine for both of us,” said Ross. “She has added several years to our lives, at least four years, and maybe more.”

Ross has the heart for it, having been the one who has undergone the extensive ticker repairs, including a visit to a Columbus area hospital just a few days before Like Old Times rolled to victory at Northfield Monday (July 18) in the featured $13,500 open trot.

McKirgan has scored many an upset in his more than 50-year career, but he has never won at the toteboard melting price of 100,000-1. Those are the odds that a person will contract Guillain-Barre Syndrome, an inflammatory disorder of the nervous system that attacks a person’s extremities.

The disease struck McKirgan in late 2003. It left him paralyzed for nearly a half a year.

“All I know is that it’s named after a couple of French guys,” said McKirgan. “I was unable to move, or even talk. All I could do was blink my eyes. When I beat it, I had to learn to walk, talk, even eat all over again. There is still numbness in my legs, but I’m getting along.”

McKirgan not only had to rehabilitate himself, but his stable, too. Official United State Trotting Association statistics show that McKirgan had just three starters in 2004. They earned $350.

His business remained slow for several years, which didn’t go unnoticed by an old and longtime McKirgan client — Keith Ross.

“I was at the farm where my young horses were stabled (Marvin Raber’s harness nursery in Baltic, OH) and I was looking at one of the young fillies I bred,” said Ross. “I knew Don was down on his luck and that he and I had some very good years together.

“So I turned to Marvin and said, ‘I’m going to name this one Like Old Times and give her to Don to train.’ I was hoping that maybe we would get lucky, like in the old days.”

McKirgan began training the daughter of Chip Chip Hooray out of the Royal Troubador mare Royal Two in preparation for her freshman campaign in 2014.

It wasn’t long in the process before he called Ross.

“I answered the phone and Don said, ‘Keith, this might be the best one I’ve ever had in my barn.’ I told him, ‘Don, don’t give me that bull.’ That’s because I’ve heard that too many times from trainers and ended up selling the horse to the Amish.”

But Like Old Times was too well-bred to end up pulling a buggy through the Ohio countryside.

Royal Two, her dam, raced just once, winning a Pennsylvania Sires Stakes race at two in 1998. Ross said she went lame the following week and was retired to the broodmare barn where she became a huge success.

Two of her sons, Cool Colby and Lucky Colby, full-brothers by Jailhouse Jesse, have each earned slightly less than $250,000. Cool Colby was sharp enough to be the 2009 Ohio Sires Stakes two-year-old colt trotting champion.

McKirgan sensed that Like Old Times had the opportunity to be as good or even better than her half-brothers.

“She had perfect manners from the start,” said McKirgan. “She is beautifully gaited and loves being out on the racetrack.”

“It should have been better, but the mistakes we made was having too many different drivers on her,” said McKirgan. “I think there were four of us. The problem is you don’t get a feel for the horse.”

Despite the musical sulkies, Like Old Times produced a huge effort in the $200,000 Ohio Sires Stakes final.

“She got beat about a foot (actually two noses), but two feet past the wire she was two feet in front,” said McKirgan.

There would be few disappointments last year for Like Old Times as she won 11 of 15 starts and $250,860. Never worse than second in defeat, she avenged her Ohio Sires Stakes near-miss the previous year, rolling to an easy victory in the $200,000 finale at Scioto Downs on Sept. 12.

“Ronnie Wrenn drove her in all but one of her starts,” said Ross. “He’s done a great job with her. The only time Ronnie couldn’t drive her (a July 3 open at Scioto) I told McKirgan he should do it. He won a photo-finish, and at age 75.”

Not only did Like Old Times earn Ross and McKirgan the OHSS title, she was voted the state’s outstanding performer for 2015.

“She’s my first Horse of the Year,” said Ross. “She’s made the most money of any horse I’ve owned, and I’ve never missed one of her races.”

When he can’t make it to the track to see her race (Northfield Park is nearly three hours from his home), Ross heads for Scioto Downs to watch live simulcasts of Like Old Times’ performances.

“I usually meet some of my buddies from the Columbus area,” said Ross. “But I’ve never bet a dime on her and never will.”

Like Old Times is dealing with a much different menu of races this year. There is just one Ohio Sires Stakes race for older female trotters (Oct. 15 at Hollywood Dayton), meaning she must face all-comers, both male and female.

“She’ll have to earn her money the hard way,” said McKirgan. “We’ll pick our spots, but we’ll have to face the boys as well as the girls.”

So far in 2016, Like Old Times has won four of 11 starts and $35,135. She hasn’t lost a step from last year’s champion campaign. Her June 20 victory at Northfield Park in 1:55 was the fastest mile by a four-year-old female trotter in track history. She equaled the mark in winning last Monday at the suburban Cleveland oval.

“All I know is that she makes me want to get up in the morning,” said Ross.

“She’s the best I’ve ever had in my barn,” he said. “I can’t wait to get to work in the morning to train her.”