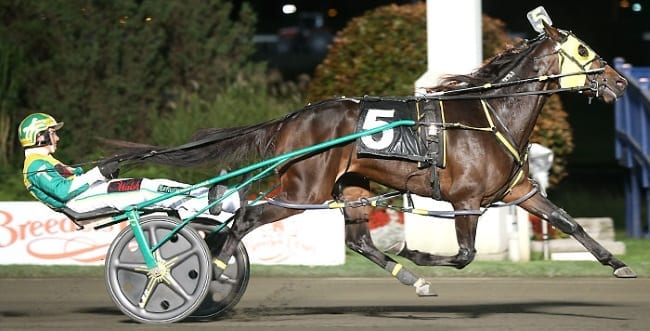 A week after a slugfest at Pocono, Wiggle It Jiggleit and Freaky Feet Pete will battle again tonight in the $250,000 Graduate Series championship at the Meadowlands reserved for four-year-olds (Sorry, Always B Miki)

Trace Tetrick doesn’t have to go far to see the impact that horses such as Freaky Feet Pete and Wiggle It Jiggleit are having on harness racing. And it has nothing to do with talking to people at the stables or racetrack. He just has to look around his neighborhood.

“My neighbors don’t really know much about racing, but they know I drive Pete and they all want to know when he’s racing,” said Tetrick, who lives in Anderson, IN, and drives Indiana-based Freaky Feet Pete for trainer Larry Rheinheimer and owners Mary Jo and Marty Rheinheimer.

“They all want to know about Pete. People want to follow him and root for him. The sport needs this, something people can follow.”

Tetrick will be alerting his neighbors to watch the races at New Jersey’s Meadowlands tonight (July 9) because Freaky Feet Pete and Wiggle It Jiggleit are ready to go at it again. A week after meeting in a memorable edition of the Ben Franklin Stakes, the two headline the $250,000 Graduate Series pacing championship at the Big M.

Freaky Feet Pete finished second to Always B Miki in the Franklin’s world-record-equaling 1:47 mile at The Downs at Mohegan Sun Pocono. The stallion, a son of Rockin Image—Skyway Lori, has won 29 of 34 lifetime races and earned $1.34 million. He has finished worse than third only once in his career.

Delaware-based Wiggle It Jiggleit, a son of Mr Wiggles—Mozzi Hanover who was the Horse of the Year in 2015, finished third in the Franklin. Trained by Clyde Francis, the gelding has won 31 of 39 career races and earned $2.69 million for the father-son team of co-owner George Teague Jr. and driver Montrell Teague. Wiggle It Jiggleit also has finished worse than third only once.

Wiggle It Jiggleit, who is the number two ranked horse in the current Hambletonian Society / Breeders Crown poll and Freaky Feet Pete, who is fifth in the rankings, both are world-record holders.

“Pete has a big following here in Indiana; people always watch him,” Tetrick said. “In Delaware, everyone’s got Wiggle. Everyone wants to follow him and George and Montrell. It’s nice because people get attached and want to follow it that way. We need hype like that, where it gets people involved and gets them to want to come out and watch the races. It’s just great to be a part of it.”

Wiggle It Jiggleit will start tonight’s Graduate final from post three. Wiggle It Jiggleit has won eight of 12 starts this season, including the Battle of Lake Erie, Dorothy Mullin Invitational, and a preliminary round of the Graduate Series at Tioga Downs.

“He came out of the (Franklin) well,” Montrell Teague said. “The draw was good to us, so we’ll be up close and see how it goes.”

The Franklin was the focus of the harness racing world’s attention, and received national coverage as well from the Associated Press, as it brought together a star-studded field highlighted by Always B Miki, Freaky Feet Pete and Wiggle It Jiggleit. It was the first time all three of those horses met in the same race.

“I thought it was fun,” Teague said. “It’s always more fun when you win, but you’re not going to win them all. Third is better than nothing. I was happy with him.

“I’m just glad I’ve got one of the horses causing a lot of buzz right now, along with Miki and Pete and Mel Mara. I think it’s all good promotion for the sport.”

Freaky Feet Pete will start the Graduate from post eight. He has won five of seven races this season, including a preliminary round of the Graduate at Mohawk. Saturday’s race will mark his first start at the Meadowlands.

“I think he’ll be able to hold his own,” Tetrick said. “We drew outside, but Pete’s versatile and that makes him a big threat. That’s what makes all three of those horses (Always B Miki, Freaky Feet Pete, and Wiggle It Jiggleit) great horses. They’re fast off the gate, they can carry their speed for a long distance, and it doesn’t have to set up perfectly for them to win.”

The following is the field for the Graduate Series pacing championship: