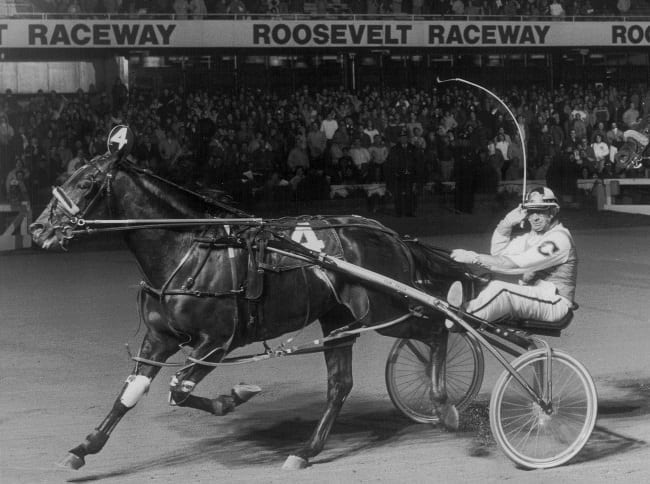 When I was a lad I began to really get into harness racing. I read all that I could. I subscribed to every harness publication my parents would allow me to; I’d even use this new invention – a “VCR” – to tape local night time newscasts because they’d sometimes show a stretch drive from Greenwood Raceway. How sad I was when they wouldn’t.

When I look back to uncover the reason why a hockey, football, basketball and baseball playing kid would be so enthralled with this sport, I can sum it up in two words, Cam Fella. The Pacing Machine was a storybook horse, who was as tough as nails. He wasn’t trained by a big name, or catch-driven by an even bigger name. Cam was a blue-collar harness horse who would meet horses such as Miller’s Scout and Coal Harbor and JD’s Buck and It’s Fritz any time they so wanted, and he was easy to like. I had to know everything about him, his foes and the sport in general. I was hooked.

Some of you are older or younger than I, but I bet for those of you (like me) who did not have family ties to this sport, you might have a similar story. Maybe your Cam Fella was Rambling Willie or Bret Hanover or Artsplace, or someone else. What the horses that hooked many of us had in common was that they raced past their three-year-old seasons, they raced often and they earned their fame. It takes time to love a horse and harness racing gave us ample opportunity to do just that.

This past weekend at Pocono in the Ben Franklin, harness racing presented a race we don’t see much of anymore: A group of talented, well-known older horses knocking heads. In one corner was the champ who exhibited jaw-dropping talent, Always B Miki. In the other were two four year olds: Jug winner Wiggle It Jiggleit, and the super-fast Indiana-bred, Freaky Feet Pete.

No offence intended to those who put big money into harness racing, but these three horses are not a three horse Burke entry; they aren’t all trained and driven by royalty or campaigned by a syndicate. Each one of them are eminently likeable; Always B Miki for overcoming injury and fighting through it to become the horse he has; Freaky Feet Pete for bringing us back to an age when a mom and pop horse could compete nightly in the sport, and Wiggle It Jiggleit for being what harness racing always has been, a family horse in a family sport.

Yes, Always B Miki, Freaky Feet Pete and Wiggle It Jiggleit are popular in 2016, but they’d be popular in 1916. As marketing author Seth Godin likes to preach, you can market who you are, you can’t market who you aren’t. These three horses are exactly what harness racing is, and it’s easy to attract those who love the sport, to watch, wager, and follow them.

The proof, as they say, was in the pudding.

Social media mentions for the race were through the roof. I had not one, not two, but three friends who don’t know a Murphy blind from a duck blind ask me if I could forward them the program page, just for the Franklin. The excitement for this race was palpable. It might’ve even been greater than another anachronistic event — younger taking on older in the TVG Pace — when Captaintreacherous faced Foiled Again.

What might be the best news regarding the eyeballs who enjoyed the Franklin is that they probably won’t have to wait six months to see these horses all meet again. This isn’t thoroughbred racing where California Chrome will never meet American Pharoah, where Rachel Alexandra never met Zenyatta, despite them racing in form for almost two full years.
In fact, as Justin Horowitz put in on Twitter on Monday, two of the three horses in the Franklin will be meeting again this weekend in the Graduate at the Meadowlands. Put that in your pipe and smoke it.

A lot of people think harness racing was built for another time and in many respects it is. It’s built for great horses racing often, for hundreds of starts. In its roots it was never about going for millions like Kentucky Derby horses do, it was about grinding out thousands each week, every week, for years. It wasn’t about hot catch drivers, with power stables and four-horse entries. It was about Joe bringing his horse from Maywood to meet Bob who has a decent horse racing out of Toronto, or New York, or Pennsylvania, or, yes, Indiana.

For one minute and forty seven seconds last weekend at Pocono we saw a slice of that. I don’t think I was the only one watching who saw a sliver of harness racing’s past in our mind’s eye. It reminded many of us why we fell in love with harness racing in the first place.

I believe today’s harness racing doesn’t do that nearly enough, and when it does, it’s absolutely glorious.