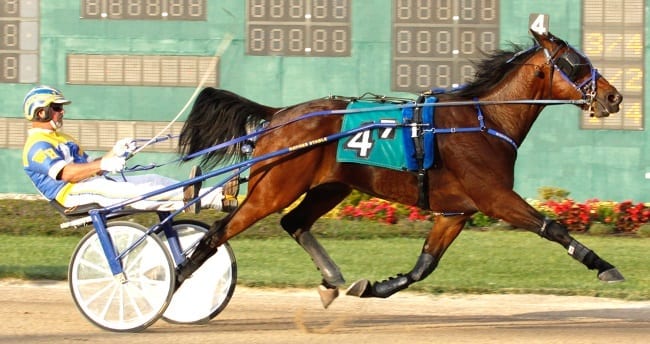 Talented Indiana Sires Stakes competitor Lil’ Day Drinkin may have some bad luck, but he is the latest horse to pay off from a $500 purchase made more than 10 years ago by Walter Haynes, Jr. and Bob Wientjes.

A $500 purchase made more than a decade ago by the partnership of trainer Walter Haynes, Jr. and Louisville-based accountant Bob Wientjes continues to pay dividends today. Those dividends come in the form of three-year-old trotter Lil’ Day Drinkin, who sports a record of 7-4-0 in 12 starts this year at Hoosier Park Racing & Casino, including last night’s second-place finish in the $20,000 final of the Ralph and Dorothy Rose series.

Lil’ Day Drinkin is out of Mya Tri, one of the most dominant trotting fillies to compete in the Indiana Sires Stakes.

The story begins in late 2002 when Wientjes purchased Giant Triumph stallion Pining Fora Tri at Harrisburg. An eight-time winner at ages two and three, the colt banked over $105,000 before being consigned to the sale. A $6,500 purchase, Pining Fora Tri was campaigned by Haynes over four seasons, earning just shy of $94,000 during that time and taking his mark of 1:54.4 at Indiana Downs.

While still racing, Haynes reached out to an Amish friend, looking for a cheap broodmare for the stallion to breed to during the offseason. A mare was found and purchased for $500. Margies First, a Crown Of Glory mare, arrived at Haynes’ farm in spring of 2004. On the racetrack she had earned $15,080 and took her 2:01.2 mark on a five-eighths at age five. Margies First didn’t set the world on fire, but her first foal put together a winning streak seldom seen in Indiana, or nationally.

Foaled May 15, 2005, Mya Tri was not royally bred in any sense. Sired by a hard-hitting racehorse and a dam with very little pedigree, she would become the queen of Indiana racing during her two-plus years of competition. Born and raised at their Alexandria, IN farm, Haynes and his wife, Sara, developed the filly, and from her first trip behind the gate, she was a dominant force.

With husband handling the driving duties and wife listed as trainer, Mya Tri made her racing debut on the Indiana Sired Fair Circuit, winning at Shelbyville by open lengths in 2:09. She put in a similar effort at Converse, winning by nearly 18, then securing a win at the Indiana State Fairgrounds in 2:03.1. Stepping into Indiana Sires Stakes at Indiana Downs, Mya Tri reeled off eight straight wins, sweeping both finals of the 2007 season. She finished the season a perfect 11 for 11, earning $124,100.

Returning at three, she continued to dominate despite being plagued by foot issues. Haynes steered Mya Tri to 10 victories in as many starts, again sweeping Indiana Sires Stakes finals at Hoosier Park and Indiana Downs. Her winning streak would end at 21 after finishing sixth in a late closer at Lexington to close out her sophomore campaign. Shoeing issues and sickness contributed to her turning in the kind of stellar effort the racing community had been accustomed to seeing. However, she had banked another $152,800 for Wienjes and Haynes.

Making four starts as a four-year-old, Mya Tri was retired that summer and kept for breeding stock. Haynes often referred to the mare as a “freak of nature” during her racing career. Now the partnership hedged their bets that the trotter could pass the ability on to her offspring. Mya Tri was bred to Cincinnati Kid in 2010, producing a colt the following year. Rya Dawk Mya won six times and earned $12,228. His full-sister, Naughty Nicole never made it to the races. For the 2013 breeding season they bred their champion to Earl Of Stormont. The ensuing foal was named Lil’ Day Drinkin by Haynes’ mother-in-law. As he was trained down to begin his racing career, the gelding presented his share of challenges.

“He likes to be in a group,” Haynes said. “If you train him by himself or with one horse, he would just as soon pull up or take a right or left turn.”

As a freshman, Lil’ Day Drinkin made five starts, winning once at Hoosier Park with a 2:00.3 performance. In three of his starts he made breaks for Haynes, taking him out of contention. For the picture of perfection that his dam was at two, this trotter did not stand out from the pack. Haynes credits his build as part of the challenge.

“He was a problem child and a bad trainer. He’s a short-coupled horse, and they have a tendency to bump themselves,” Haynes explained. “When we turned him out last year he hit his back foot with his front hoof and blew it up. He had a spot that was half the size of a golf ball and it made the boot stick out even more.”

With $6,002 in earnings at two, Lil’ Day Drinkin was eligible to the early closing series The Cardinal at Hoosier Park this spring. In the series for non-winners of $7,500 lifetime, Haynes steered his charge to a runner-up finish and 1:56.2 win in the first two legs before winning the $15,000 final as the second choice. Moving on to The Expression at Hoosier Park, the gelding swept both legs and the $18,000 final. Those victories may have looked good on paper, but events going on behind the scenes reinforced the reputation he was gaining as a bad luck horse.

Turned out at the farm between starts, the gelding somehow yanked a shoe off and stepped on it, puncturing his hoof. Haynes found the shoe with “nothing but blood on it.”

“For about three days it was really bad. We kept soaking his foot twice a day,” he said. “We only jogged him twice in seven days and he still won in 1:57.”

Another time as he was scoring down before a start at Hoosier Park, Lil’ Day Drinkin was jumping and diving around and managed to break his crupper. Half of the harness fell off and Haynes had to return to the paddock for an equipment change. That didn’t keep the trotter from reaching the winner’s circle.

“He’s a big-hearted horse, but he has some issues,” Haynes said. “The little stuff just adds up.”

Moving into Indiana Sires Stakes action, the latest issue cropped up for Lil’ Day Drinkin. After finishing second to favorite Fly Jesse Fly in his $20,000 elimination, trotting the mile in 1:54.3, the gelding faltered in the $75,000 final. In the stretch he broke stride and finished a disappointing seventh.

“He bled and tied up that week,” said Haynes. “When he bled in the final he panicked. He fell apart at the end of the mile.”

Put on Lasix for the first time in his career, Lil’ Day Drinkin has rebounded nicely, winning the first two legs of The Ralph And Dorothy Rose series for trotters at Hoosier Park before going off as the favorite in Thursday’s (June 23) final and finishing one-and-a-quarter lengths behind ABC Winner.

Up next, Lil’ Day Drinkin will again test the Indiana Sires Stakes ranks with another elimination attempt. In a division that includes heavyweight Bridge To Jesse’s, nothing is easy.

“I think he’ll be better,” Haynes said. “I think he might be the third or fourth best in there, but he shows he can do it.”

Lil’ Day Drinkin will never match his dam in production on the track. But for Haynes and Wientjes, he fits the bill as a trotter that consistently performs and brings home checks. Finishing first or second in 10 of 11 seasonal starts, he has already earned $47,875 for his connections, and as one of the better trotters in the division, he could earn plenty more in ISS competition before season’s end. Not a bad return on a small investment all those years ago.