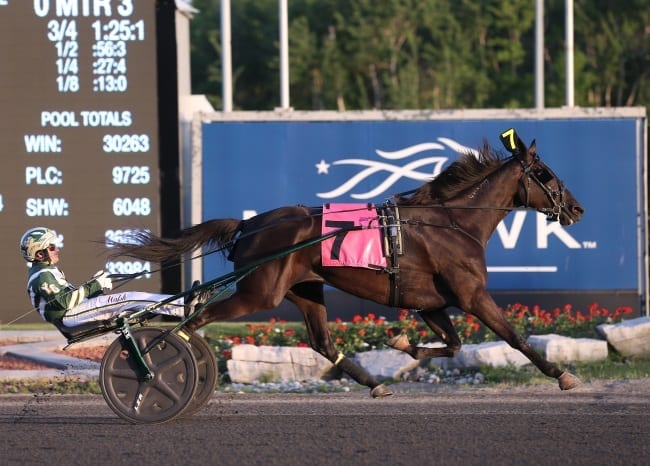 Trotters took centre stage Friday at Mohawk with eliminations for two of the stakes on the Pepsi North America Cup undercard.

Elimination weekend at Mohawk Racetrack kicked off Friday (June 10) with some impressive performances in the Armbro Flight and Goodtimes Stakes.

Both stakes events required two eliminations, with the Armbro Flight for trotting mares going for $35,000 (all figures Cdn $) and the Goodtimes for three-year-old trotters going for $30,000 a split.

Following the eliminations, the finals for both the $267,000 Armbro Flight and $268,000 Goodtimes were drawn. The elimination winners earned the right to select their own post.

Here are the fields for the Armbro Flight and Goodtimes finals to be contested on Saturday’s (June 18) Pepsi North America Cup card:

Hannelore Hanover was a dominant 1:52.2 winner in the first Armbro Flight elimination.

The Ron Burke trainee flashed early speed for driver Yannick Gingras to lead the field by the opening-quarter in :27.4. Shake It Cerry made a second-quarter move to the lead allowing Gingras to sit in the two-hole.

After fractions of :56.3 and 1:25.1, Shake It Cerry brought the field to the top of the lane, but was quickly overtaken by Hannelore Hanover. The Burke trainee angled out of the pocket at the three-quarter pole and powered home under wraps in :27 for a four-and-three-quarter length victory.

Rockin With Dewey got up for second, while Shake It Cerry dropped back to finish third. Charmed Life and Missys Ga Ga rounded out the top five to qualify for the final.

A four-year-old daughter of Swan For All—High Sobriety, Hannelore Hanover teamed up with Gingras for the first time Friday and made a big impression on her new driver.

“She’s really impressive. She won as easy as a horse can do it,” said Gingras. “:27 on the end of it and it was just a walk in the park. Ron (Burke) has been telling me how good she was since last year and he believed she was the third best trotting filly behind Mission Brief and Wild Honey.”

Hannelore Hanover now has six wins in seven outings this season and 15 overall in her career for earnings of over $417,000. She is owned by Burke Racing Stable LLC, Weaver Bruscemi LLC and Frank Baldachino.

In the second elimination, Rules Of The Road went gate-to-wire for her third win of the season in 1:54.1.

Driven by David Miller, Rules Of The Road showed good early speed to leave out hard with Stormont Kate. Miller won the early battle and reached the opening-quarter in :27.3. Rules Of The Road got an easy middle-half of :58.1 and was able to capitalize off that with a :28.2 final-quarter to hold off her rivals for a length-and-a-quarter victory. Elegant Serenity finished second, while Stormont Kate was third.

The final two spots in the final were secured by Barn Doll and White Becomes Her.

A four-year-old daughter of Muscle Hill—Right On Renee, Rules Of The Road is trained by Charles Connor Jr. for owners Arden Homestead Stable and Janice Connor. She now has three wins in seven starts this season.

Rules Of The Road scored her ninth career victory Friday and pushed her career earnings to over $278,000. She paid $8.80 to win.

The Burke-Gingras combination struck again in the first elimination of the Goodtimes for sophomore trotters.

Dayson trotted up from fourth to first in the second-quarter and never looked back en route to a 1:53.2 victory.

Will Take Charge was the leader at the opening-quarter in :27.4, but was overtaken by a pocket-pulling Bar Hopping. Gingras followed the new leader and quickly moved up to take the lead at the half in :56.2. Dayson got a :29.1 third-quarter and finished off the victory with a :27.4 final-quarter to defeat Bar Hopping by one-and-three-quarter lengths.

Will Take Charge finished third, while Zagster, who was first up around the final turn, was fourth. Goin To The Limit, who started from the second-tier, finished fifth to qualify for the final.

A gelded son of Conway Hall—Nervey’s Taurus, Dayson now has three wins in four starts this season after winning seven of eight as a rookie.

“He’s really handy,” said Gingras following the victory. “When I raced him the first time this year at Chester he was a little bit grabby, but they changed a few things on him and tonight he was perfect, he drove great and he’s got high speed.”

Dayson raced last season for Howard Okusko and was a private purchase during the winter by Burke Racing Stable LLC, Our Horse Cents Stables, J And T Silva Stables and Rossie Smith.

Many eyes were on last year’s Ontario Sires Stakes champion Tony Soprano in the second elimination, but his season debut was spoiled by Dia Monde and driver Randy Waples.

Tony Soprano got away fifth and came charging first up midway doing the backstretch to engage with the leader United Bi. Dia Monde was trotting along in sixth and Waples opted to try and follow the 7-5 favorite.

Tony Soprano ultimately cleared nearing the three-quarter pole and reached that marker in 1:25.1. In the stretch, Campbell asked his trotter to try and sprint away, while Waples dropped in behind Tony Soprano for a brief moment. Dia Monde came back to the outside and powered by the public’s choice to score an 8-1 upset in a career-best 1:54.

Blenheim followed Dia Monde around the track to get up for second, while Tony Soprano was third in his season debut. Marion Marauder and Honor Above All secured the final two spots in next week’s final.

A gelded son of Deweycheatumnhowe—Lady Bar, Dia Monde entered the Goodtimes elimination with a victory and runner-up finish in two starts this season. Friday’s start was the first time Waples sat behind the Tom Durand trainee.

“Tom’s been around a long time and I’ve seen him come out with really good horses year after year,” said Waples. “Sometimes he hands the lines over and sometimes he wants to drive them himself.

“I had raced against him a couple of times when Tom had driven him and I think I even mentioned to him ‘What a nice horse you got there’ and it just worked out my way.”

Dia Monde is owned by June and Tom Durand along with Allan Smith. The sophomore trotter now has $26,500 earned this season after banking $11,900 in three starts as a rookie.
Dia Monde paid $18.30 to win.