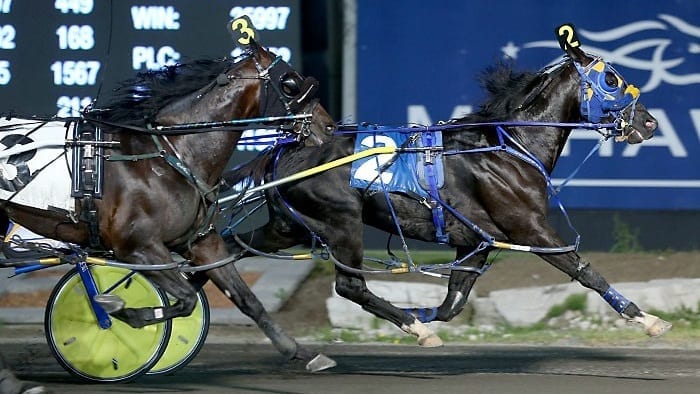 The trainers of the Somebeachsomewhere winners both said they have a lot of work to do to get their horses ready for the first big test of the sophomore pacing season.

The winning trainers of a pair of $75,000 (Cdn) Somebeachsomewhere divisions Saturday (June 4) at Mohawk each kept their celebrations to a minimum despite the fact the stake is a key prep for the June 18 $1 million Pepsi North America Cup.

Both Casie Coleman — trainer of first division winner Betting Line — and Mark Silva — who conditions second division winner Lyons Snyder — said they have a lot of work to do to get their sophomore pacers ready for Canada’s richest harness race.

“I’m never disappointed with a win, but (Betting Line) was a bit worked up in the paddock tonight,” Coleman said. “I actually had to move his paddock stall down to the end of the paddock and he took a little bit of his race out of himself before we went to the gate tonight.

“He won, so obviously I’m happy with him, but he’s a little better than what he was tonight and we’ll get that rectified for next week.”

Coleman even suggested she “made a bonehead move” when it came to Betting Line’s shoes.

“I might put his shoes back the way I used to have them. Normally, you would think you would want aluminum shoes, but I think I might go back to the steel. He wore them last year up front and this track is known to grip it better when you wear aluminums and I just think I made a bad decision… I probably got lucky that he got the win and I got through it without looking too bad.”

Betting Line, owned by Coleman and Ross Warriner’s West Wins Stable, Christine Calhoun and Mac Nichol, entered the Somebeachsomewhere off an impressive 1:49.4 win on May 21. At two he earned over $410,000 and won the Ontario Sires Stakes (OSS) Super Final.

Lyons Snyder (Well Said—Armbro Cachet) was game in holding off a late charge by Control The Moment, Canada’s 2015 freshman pacing colt of the year. Yet, Silva — who trains Lyons Snyder for Geoff Lyons of Brantford, ON and Jeff Snyder of New York City — said the pacer still needs some adjustments.

“He still runs out a little,” Silva said. “We’ve got a little more work to do with him, but if I straighten that out he’s a serious horse.”

The trainer said Lyons Snyder was “really lame behind” in 2015 and was given four months off by Silva who took over conditioning the colt from Ron Burke late in the year.

Driver Sylvain Filion orchestrated Lyons Snyder’s 1:49 victory in the Somebeachsomewhere. Filion left from post three and got away in the two-hole behind Major Hill. Filion didn’t sit in the pocket long. He took command before the field reached the half and never looked back.

Control The Moment and Randy Waples nearly scooted past in deep stretch, but Lyons dug in, pacing home in :26.4 to record the victory. Nocturnal Bluechip finished third.

Next up for the majority of the Somebeachsomewhere competitors is the Pepsi North America Cup eliminations next Saturday (June 11) at Mohawk.