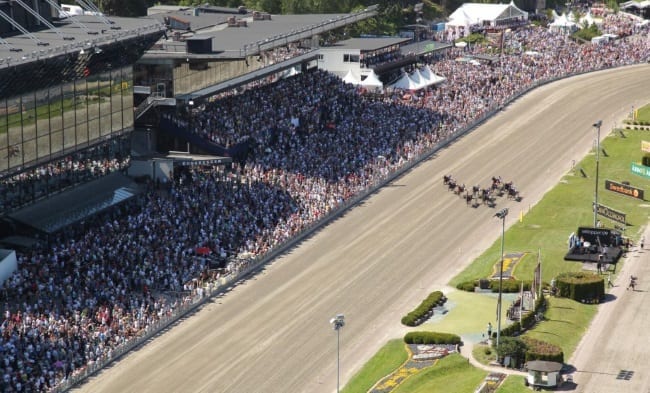 All eyes on Sweden for today’s Elitlopp

Celebrating the majesty of one of the world’s greatest trotting events.

Do you want to know how to make a Swedish pancake?

Stand just inside the main entrance to the Solvalla trotting track in Stockholm just before they open the gates on Elitlopp Sunday morning.

If you fail to move fast enough, you’ll made into a pancake by a steamroller of Swedish trotting fans who pour through the gates and make a mad dash to secure the best spots for viewing Sweden’s greatest racing day.

The Swedes take their trotting very seriously. They know the horses well and they appreciate greatness. Often when an Elitlopp starter steps onto the track in the backstretch for a warm-up mile, a rhythmic applause begins. The Swedish fans know they’re seeing the best in the world, and they willingly show their appreciation.

In addition to their love of trotting, the Swedes are surely also showing their joy for the spectacular weather that often accompanies the Elitlopp weekend. Late May is a wondrous time to be in the Stockholm as flowering trees and bulbs are bursting into bloom everywhere you look.

By Elitlopp time, Swedes have endured a long, dark winter and they’re ready to enjoy some sunshine and superstar trotters.

A Swedish friend once told me on Elitlopp weekend, “Swedes enjoy the sun so much now because they see so little of it in winter.”

The enthusiasm of the crowd rocks the string of grandstands that line the homestretch at Solvalla. The track apron is packed so tightly with trotting fans that even Emmitt Smith or Walter Payton would be stymied if they tried to wedge their way through the crowd.

And loud? The Elitlopp crowd makes more noise than any other group of racing fans I’ve heard. I swear that farm animals in Finland get spooked when the Elitlopp crowd lets loose with a roar.

My first Elitlopp was 1988 when Mack Lobell defeated a star-studded cast that included American expatriates Sugarcane Hanover and Napoletano.

Lou Guida, Mack’s spokesman and one of his owners, swaggered with understandable pride as he and John Campbell led their trotting star up the Solvalla stretch after the victory.

My next Elitlopp came four years later and it resulted in victory for Canada’s Billyjojimbob, but his entourage was the antithesis of Mack’s. Owners Lori and Mike Wade were polar opposites of Guida. That afternoon they were not gnoshing on salmon and potatoes in the restaurant at Solvalla, but instead schlepping their star horse in the quarantine area during the warm-ups and race.

I encountered Lori at a lovely pre-race evening party at Millesgarten, a park on the waterfront in Stockholm with a plethora of sculptures. I asked her where Mike was and she said simply, “With the horse.”

Hospitality parties were fine, but the Wades had their priorities straight, and their priority was the well-being of their horse.

Their efforts paid off. Billyjojimbob won in straight heats, defeating the great mare Peace Corps. The Wades stood proudly with their pride and joy in the winner’s circle as “Oh,Canada” was played. They were dressed simply in white tee shirts with a bright red maple leaf. I’m not a Canadian, but even I got misty-eyed because I was so happy for them.

A Swedish trotting journalist was also moved by their victory. He told me later that it was one of his favorite Elitlopps despite the fact that the winner had no connection to Sweden.

“But Lori and Mike were jeans people,” he explained to me.

That’s true. They were wearing jeans — clean and neat jeans— with their Maple Leaf tree shirts.

“In Sweden we think of trotting as a sport for the people, everyday people,” the journalist explained to me. “It’s a sport where ordinary people, like farmers or office workers, can participate. It’s not just a sport for the very rich. To see a young couple wearing jeans win the Elitlopp just reminds us that dreams can come true in trotting.”

(One of the amusing memories of that race was hearing Swedes try to pronounce the winner’s name. Not only was it a run-on name based on “The Waltons” TV series, but most Swedes pronounced the “j” as a “y.”

So they often saluted the Elitlopp winner named “Billy-Yo-Yim-Bob.”

The Elitlopp was first contested in 1952, and, starting in the 1960s, American racing executive Stan Bergstein made sure that North American horses were represented.

My first personal connection to the Elitlopp came in 1973 when Flower Child traveled to Sweden to represent the red, white, and blue. I had been the caretaker for Flower Child for a brief time, and he did his followers proud in Sweden when he trotted the equivalent of the first 2:00 mile in Europe in the Elitlopp.

Mack Lobell’s victory in 1988 really brought the Elitlopp into the spotlight for Americans, and our best trotters began making pilgrimages to Solvalla each year. The superb mares Elma and Fresh Yankee had won the Elitlopp for North American owners in the 1960s, but there was a hiatus of North American-owned winners until Mack came along. Moni Maker in 1999 was the last North American winner.

Owners of invited Elitlopp horses are treated like royalty when they’re in Sweden. Travel costs are paid and an American owner of an Elitlopp horse once told me, “I never got a chance to take my wallet out the whole time I was in Sweden. They paid for everything.”

Even an average racing fan visiting Solvalla at Elitlopp time will enjoy Swedish hospitality as the trotting people are very proud of their sport and will be happy to answer any questions. And in many cases they know more about what is happening in North American trotting than we natives do.

Certainly my first trip to Solvalla opened up my eyes to new worlds — quite literally. I had never seen the “volt start” method used, and it is quite common in Europe when horses are handicapped by distance. It’s basically a walk-up start without a mobile gate.

Larger fields are prevalent in Sweden and throughout Europe, and large fields usually make for more exciting races.

I also saw my first cold-blood race at Solvalla, too, when the famed Norwegian Alm Svarten won. Cold-bloods are trotters that are smaller and heavier-bodied than standardbreds, and they are unique to trotting in northern Europe.

The fastest and richest coldblood is the Swedish hero Jarvsofaks, a winner of 201 races in 234 starts, including a streak of 42 straight wins. He earned 21 million Swedish kronor or over $2.5 U.S. at today’s rates.

The Elitlopp is an extraordinary experience — for the connections of the participating horses and certainly for the trotting fan that loves great horses and a great spectacle.

Where to watch this morning’s Elitlopp (by Moira Fanning)

If you can’t make it to the Meadowlands this morning (Sunday, May 29) to watch and wager on the Elitlopp (doors open at 9 a.m.), here’s a link to watch a live stream from Solvalla Racetrack.
Another option is to pay $3.95 for a 24-hour subscription to racingday.com. There is English analysis and unlimited access to all the racing and replays that day.

The post time for the first of the two Elitlopp eliminations (race nine) is 9:22 a.m. (EST).