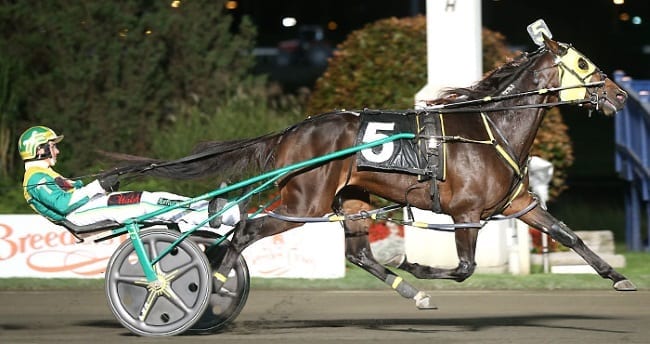 Hold onto your hats

In harness racing it is rarely readily apparent when a true stakes season starts. For the three-year-olds, it’s sometimes the North America Cup. For the sophomore trotters, it’s maybe the Goodtimes at Mohawk. For the older pacers it might be many events, but to really get things going it usually depends on when a couple (or more) popular horses finally meet.

This year, one of the match-ups everyone wants to see is here, and it happens in race 11 tomorrow (Saturday), at Northfield Park – The Battle of Lake Erie.

Even Wiggle It Jiggleit drawing the rail, with nemesis Freaky Feet Pete outside in post five, cannot dampen the enthusiasm for this year’s Battle. Pete has an intense following from many inside and outside the Hoosier state, and Wiggle – probably the most well-known horse in harness racing — is right at home in Ohio, where his huge first-over Jug victory is fresh in everyone’s memory banks.

When an item about this race was posted on Standardbred Canada, the first comment, from Allan Casselman was, “If this doesn’t grab your attention, there’s no hope for the sport.” I think he’s right.

I don’t think we’ve seen two more popular four-year-olds meet in quite some time. And saying they’re ‘popular’ probably discounts what they truly are: Fantastic, fast, standardbreds. You don’t have to sell them with sizzle, because they’re both tougher than a $2 steak.

Adding even more zest to the field is, of course, the grand old man of harness racing (and a horse right at home on a half-mile track), Foiled Again. He even has his own hashtag on twitter, #foiledagainforever.

There’s an interesting debate that has been going on for some time in the sport about racing older pacers, instead of breeding them (which culminated, or was spawned by the “Gural Rule”). Detractors said older pacers do nothing really to move the needle, while others noted that if you’re trying to sell a sport, you don’t retire Michael Jordan or Steph Curry after one season.

I will say (despite the rule being rescinded for the most part) these two pacers can move the needle. All we have to do is look at last weekend’s Confederation Cup at Flamboro Downs. With Wiggle’s star power, the handle on the Confederation Cup was (all in, including Pick 4’s) about $150,000. The Super High Five – rarely playable at small tracks – generated a bettable pool of almost $20,000. The entire 12-race card outside the Cup drew only about $375,000. Yes folks, having a star like Wiggle race, matters.

I think we can expect good things on Saturday at Northfield. They have a Pick 4 which should draw big dollars and they’re guaranteeing the super pool at a really nice $25,000. It should be a great night.

Moving forward, 2016 shapes up as a massive year for the older pacers. Along with the star power of Wiggle and Pete, probably the fastest pacer I have ever seen – Always B Miki – is waiting in the wings. The Takter trainee appears to have come back as good as ever, and when we see him stretched out in a major stake, there could be fireworks. I’ll set the over/under on his fastest winning time this year at 146.2. Any takers?

Adding even more spice on the free-for-all side is another four year old – In the Arsenal. The big, strong son of American Ideal—Ladyotra made his debut last weekend at the Meadowlands, and he showed he wintered well. He paced his final half in a sparkling 53 flat, with a last quarter of :26. Trainer Kelvin Harrison was not overly hard on this colt at three, and it looks like In the Arsenal might pay him back with a nice year at four (and hopefully beyond).

In addition to the usual suspects in the older division (don’t kid yourselves, there were some super-nice performances in the Levy), the sport rarely doesn’t see an older horse or two get good for a period of time, who might not be on the radar. After watching last week’s open at the Big M, Mel Mara might fit that profile. He showed he can give Always B Miki a run for his money.

And, oh, did I mention, Wiggle It Jiggleit didn’t even win last weekend? He was defeated by an up-and-coming horse named Rockin’ Ron. Ron faces In the Arsenal in the Graduate at the Meadowlands on Saturday.

Harness racing has always thrived on great horses, and great competition. Owners and trainers scour pedigree pages, wake up at 2 a.m. to check on their charge’s when they’re sick; do everything they possibly can to compete; to say ‘my horse is faster than your horse’. If you like great competition, and you love harness racing, it’s highly likely you’ll be watching the older pacers this season. It could be something really special.
The season truly starts tomorrow night at Northfield in the Battle of Lake Erie. Let’s get it going.