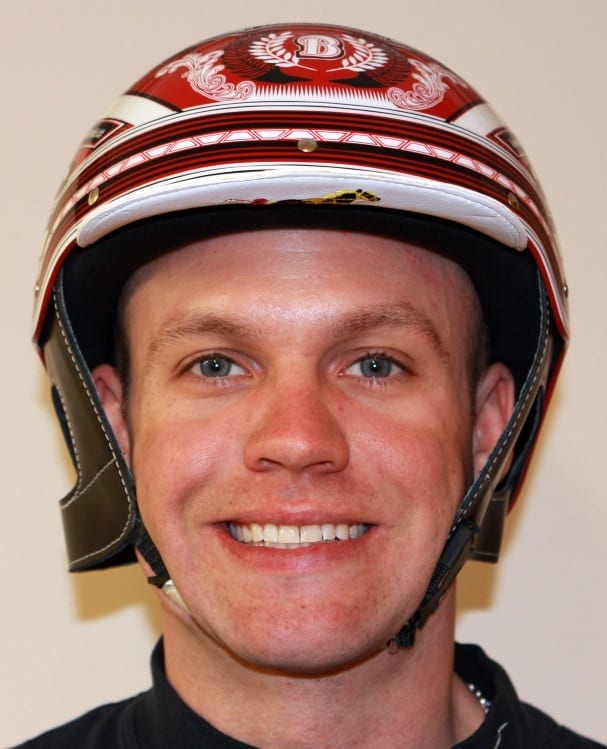 Pushed by his grandfather to always strive to do better, driver Jason  Bartlett is soaring at Yonkers thanks to preparation and hard work.

Whenever Jason Bartlett reaches the winner’s circle at Yonkers Raceway, something he is accomplishing with remarkable frequency as the runaway leader in the driver standings, he always makes sure to wave. The gesture acknowledges his wife, Kristen, and their sons, Kobe, 9, and Karter, 5. And it salutes Richard Bartlett, a grandfather so loving and devoted that Jason refers to him as “dad.”

“He taught me everything I know,” said Bartlett, 34. “If it wasn’t for him, I would certainly not be in the position I am in today.”

Through March 21, Bartlett had more than doubled the victory total of highly-regarded Brian Sears with 148 victories from 516 starts as he pursued a sixth driving title at Yonkers. Sears owned 73 wins in 368 starts. Bartlett also had 93 second-place finishes and 58 third-place showings for earnings of $1,600,634. Sears’ earnings stood at $1,013,363.

When Jason reflects on his rise to prominence, his thoughts invariably circle back to his grandfather. Richard, who continues to train standardbreds in Windsor, ME at age 76, played a larger role of necessity because Jason’s mother, Sonia, was a single parent.

Jason was always around the barn at a young age and said he learned the business “in the trenches” by cleaning stalls and grooming horses. Richard pushed him to excel, no matter what he was doing.

“He was, and still is, my biggest fan,” Jason said. “He was there to tell me when I did something wrong, which was good. He’s been like that my whole life, whether it was playing basketball or driving racehorses. You can always be better.”

As much as Richard cared for his grandson, he also served as his sternest critic when Jason began his driving career.

“I could win five in a day and the other one would get beat and we’d talk about that one,” Jason said. “At the time, I thought it was kind of harsh, but he pushed me to get better. You’re only as good as your last drive.”

When Jason left Maine and began driving at Yonkers’ half-mile oval in the autumn of 2007, Richard had a satellite dish installed and would scrutinize every race.

That process became extremely beneficial over time. Much of Jason’s success can be traced to his development into an outstanding student of the game.

“It amazes me what he knows about other horses on the track,” Kristen said. “He remembers everything.”

Trainers appreciate Jason’s preparedness. He is keenly aware of the racing style of opposing horses and the tendencies of his fellow drivers. He does not need extensive pre-race instructions. Very little surprises him.

“I think the main thing he brings is he really does his homework. He always thinks about how a race sets up,” said Jeff Bamond, a trainer who often turns to Jason with his best stock. “The gate doesn’t open and he wings it.”

Jason has seemingly replaced his grandfather as his harshest critic. “I’m the first one to say, ‘I messed up. I made a mistake and I apologize,’” said Jason. “I guess you’ve got to own it when you make a mistake. That’s the way I look at it. Trainers don’t want to hear excuses when you come off the track.”

Kristen and Jason have been married for 12 years. She said he has gotten better at controlling his emotions. He no longer allows one bad trip to turn into another; he no longer takes his frustrations home.

“He’s learned to let it go and turn the page,” she said. “He’s gotten more mature about it, I guess. There is another race to be had. Dwell on the last one and you’re not going to do any good.”

He said he is focused on the bottom line to the exclusion of almost everything else.

“For me, it’s not about (being viewed as) elite or Hall of Fame,” he said. “I just want to make a good living for my family. I want to be happy.”

He has been criticized for not venturing outside of his Yonkers Raceway comfort zone with any regularity.

“I’ve always dreamed about winning the Meadowlands Pace,” he said. “But I don’t put myself out there to get those horses. I’m not at the Meadowlands.”

But he said he could not feel more at home than he does at Yonkers. “I love it here. I grew up on a half,” he said, referring to the half-mile oval. “I make a great living for my family. Maybe I should go hunt for more, but to me it’s a great living. I guess you can’t have everything.”

Then again, perhaps he does. He has the woman of his dreams, having met Kristen in the winner’s circle at Plainridge Racecourse near Plainville, MA. She knew the business as the daughter of a trainer, Diane Bryant. She, too, was raised by a single-parent mother.

When they spoke of their future together, it was always with the determination that their children’s lives would be dramatically different from their own. They would provide a traditional family structure.

“That’s what we wanted for our kids, the mother and father there,” Kristen said.

Jason has been there for Kobe by coaching his fourth-grade basketball team in their hometown of Goshen, NY. Jason and Kristen will coach Karter’s T-ball team. Karter so idolizes his father that he has a makeshift sulky set up in his bedroom behind a stuffed horse.

And whenever Bartlett reaches the winner’s circle, his wife, his children, and his proud grandfather will look for the wave that says everything.