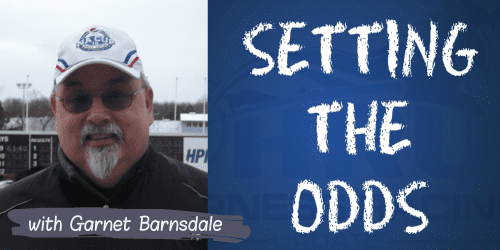 Setting The Odds with Garnet Barnsdale

Handicap the chances the following will occur:

A major jurisdiction will lower takeout this year
— GB: 30/1 — “This seems doubtful other than for the odd individual multi-race wager here and there.”

Harness racing jurisdictions will institute a tougher, uniform medication policy within three years — GB: 25/1 — “They just can’t seem to get together on these things, as critically needed as it is from a bettor’s perspective.”

Harness racing jurisdictions will band together to fund more comprehensive drug testing in the next three years
— GB: 40/1 — “Sadly, the ‘band together’ part seems to be a longshot.”

Drug testing protocols will begin to catch up to drug cheats in the next three years
— GB: 50/1 — “The cheats always seem to be a step ahead, unfortunately.”

The trend toward guaranteed pools and strategic wagering will increase in the next three years
— GB: 7/2 — “It’s been a great idea and produced some nice pools. The smartest bettors are always looking for low takeout wagers and carryovers that can produce a ‘positive takeout’ situation.” Setting The Odds Best Bet

Total harness racing handle in North America will be higher this year than last
— GB: 3/1 — “Fuelled by solid wagering at The Meadowlands and Woodbine/Mohawk and Western Fair, it looks good so far.”

Standardbred foal numbers will reverse the current trend and begin to increase over the next five years
— GB: 12/1 — “I’d make these odds much lower if the Meadowlands gets a casino.”

Exchange wagering will be common at harness racing tracks in North America in five years
— GB: 50/1 — “Many bettors would probably like it, but, I can’t see it becoming common that quickly.”

A harness racing lottery similar to Sweden’s V75 will debut in North America in the next five years — GB: 15/1 — “I could see something like this starting up in Ontario with the OLG, but, the OLG is also quite unpredictable.”

Slots money will be earmarked for customer appreciation in a major way within five years
— GB: 40/1 — “Slot customers already have a rewards system in play, I doubt a separate system for horseplayers would be created with slot money.”

Within five years there will be commingled wagering between WEG and Europe on a regular basis
— GB: 10/1 — “It would be a great idea. Jamie Martin, are you listening?”

Post drags will be eliminated within two years
— GB: 100/1 — “It’s a vicious cycle that tracks are now dependent on drag. It’s so appropriately named because it really is a total drag and impossible to explain to a newbie with a positive spin.”

Tracks with passing lanes will see an increase in wagering over the next three years
— GB: 40/1 — “I can’t see it.

A handicapper will land a major executive position at a prominent North American harness track in the next three years
— GB: 15/1 — “Although, I am available!”

In the next three years, tracks and horsepeople will finally appreciate customers are an equal partner in the business equation and essential to the bottom line
— GB: 6/1 — “Haven’t we got to the point yet where they don’t have a choice if they want to survive?”

In the next three years, the standardbred industry will follow the thoroughbred lead and begin providing expanded handicapping information similar to what is available for the runners now in the Daily Racing Form
— GB: 12/1 — “But I really hope so!

Harness tracks will work together with post times, so overlap is eliminated
— GB: 7/1 — “WEG and The Big M seem to be trying to avoid crossing each other’s post times.”

Judges will begin to call kicking more frequently this year
— GB: 6/1 — “I know they have been watching it closely at Woodbine and enforcing it.”

Judges will begin to call giving holes, passing up the inside etc. more frequently this year
— GB: 10/1 — “That continues to be inconsistent.

Harness racing will have a real, promoted Pacing Triple Crown within five years
— GB: 20/1 — “But it would be nice to see what kind of response that would get.

The Meadowlands will have a casino in three years
— GB: 9/2 — “It seems like it has a much better chance now with what has been happening this week.

The Meadowlands will have the highest purses in harness racing in three years
— GB: 9/2 — “It makes sense for these odds to mirror those of the previous question.”

You will win a major handicapping contest with a significant prize in the next three years
— GB: 50/1 — “I don’t play enough of them.”

You will own a horse that wins a major stakes race in the next five years
— GB: 1,000/1 — “But go ahead and do it Majestic Way! (the only one I am in on currently).” Setting The Odds Longshot