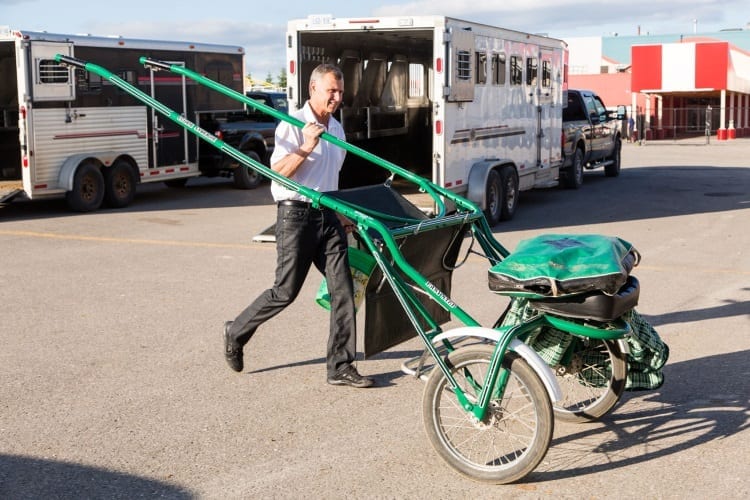 Confidence, Stability on the Rise in Ontario

A two-year extension to the province’s funding agreement adds $200 million to Ontario’s horse racing industry and also extends the $16 million Ontario Sires Stakes program and $3 million in breeders awards through 2021.

Ontario Sired horses had a spectacular 2015 on both the racetrack and in the sales ring, and an extension to current provincial funding agreements through March 2021 — at an additional $100 million per year — is allowing breeders, owners and trainers to remain focused on their goal of producing and racing world class horses.

As the breeder, co-owner and trainer of last year’s top three-year-old trotting colt, Dustin Jones had a 360-degree view of the benefits of Ontario’s Standardbred Improvement Program (SIP). The program offers incentives and rewards that flow primarily through two key programs, the Ontario Sires Stakes (OSS) and the Ontario Resident Mare program, and trotter Dont Rush cashed in on both fronts.

The son of Infinitif and Color Me Pretty earned $260,000 in the OSS Gold Series, triumphing in the season-ending Super Final for the second straight year, and Jones received a cheque for $76,967 in breeder’s rewards. Dont Rush was eligible for both Ontario Sired rewards, because sire Infinitif is registered with the OSS program, and Ontario Bred rewards, because Jones spent the $50 to register Color Me Pretty in the Ontario Resident Mare program.

“I’ve got three broodmares and they’re all being bred to Ontario Bred horses. I pay them in every year (to the Ontario Resident Mare Program),” says Jones. “A year ago I bought a share in Royalty For Life, so the mother of Dont Rush is in foal to him, and then I have two pacing mares, one’s being bred to Thinking Out Loud and the other one to Mach Three.”

As a trainer, Jones shifted his focus to the Ontario program three years ago and says the economics of the province’s harness racing industry were central to his decision.

“I thought it was economical to buy Ontario Breds, because, you know, less travel, less staking. The ones that are good enough to stake to some of the Grand Circuit races, Mohawk is actually the cheapest place to pay the horses into. It’s a lot cheaper than paying them into the other Grand Circuit races,” said the Waterdown, ON resident. “I still think it’s the best place overall to race, for the value of what you get to race for and not having to move around a lot.”

The OSS paid out almost $16 million in 2015 and total breeders rewards were worth $3 million, with rewards going to breeders of horses successful in both the OSS and selected open stake events (where Ontario Sired horses captured over 30 trophies). Owners of Ontario Sired two-year-olds also earned a purse bonus of 20 per cent on overnight earnings in Ontario and five per cent on OSS earnings. The numbers will be similar in 2016, with the OSS purse amount expected to fall solely as a result of a smaller number of registered two and three-year-olds competing in fewer divisions

One result of those smaller numbers was the brisk business done on Ontario Sired colts and fillies at last fall’s yearling sales, both in Ontario and across the border. Supply will continue to be tight at the 2016 sales, but buyers will be relieved to learn that breedings were up 23 per cent in 2015.

“At Seelster Farms, we chose to stick it out and stick with our program, and it paid off last fall,” said assistant farm manager Walter Parkinson of the farm’s 2015 sales results, which saw two Seelster-breds sell for $80,000 at the Forest City Sale. “Hopefully we’ll see similar results this fall.”
With optimism edging back into the provincial psyche, the jurisdiction was also able to attract a number of new stallions for the 2016 breeding season, including two of Jones’ former pupils, trotters Prestidigitator (Kadabra) and Wheeling N Dealin (Cantab Hall). Both horses stand at Seelster Farms, and Parkinson says breeder response has been good to both trotters, as well as pacing newcomer Thinking Out Loud (Ponder).

“Booking are just starting to get much heavier now (mid-March),” said Parkinson, who also serves as the president of the Standardbred Breeders of Ontario Association. “We’ve had fairly good response to all the stallions.”

Nine other stallions also moved to, or back to, Ontario for the 2016 season, pushing total eligible stallions to 57 from the 45 that were registered in 2015. Stallion owners also benefit from the SIP program, with the top producers by progeny earnings in each of four categories (two-year-old trotter, two-year-old pacer, three-year-old trotter, three-year-old pacer) earning $100,000 so long as they still reside in Ontari o.

In addition to the purses and incentives that are triggered by OSS and open stake success, Ontario also gives owners an opportunity to recoup their investment on a smaller scale.

“Some of those races, like the City of London (at The Raceway at Western Fair District), those kinds of stakes are so important,” said trainer John Bax, from his winter base in Florida. Bax is an annual fixture on the OSS leading trainer list. “For instance I had a filly that wasn’t doing anything, she goes down and finishes second, picked up $10,000, and you know what, that kind of got her rolling for the year. Those kinds of stakes at the little tracks, they don’t sound like much, but I think they’re a life saver for a lot of people — me included.”

The combination of a quality sires stakes program, ample open stake opportunities, and a variety of overnight conditions and competitive levels will continue to make Ontario an attractive jurisdiction for owners and trainers in both 2016 and through the near-term. In addition, enhanced breeders rewards for both Ontario Sired and Ontario Bred horses and increased demand for Ontario Sired yearlings will allow breeders some much needed stability while the industry works toward a long-term sustainable funding arrangement with the Ontario Lottery and Gaming Corporation, one that is expected to see horse racing integrated into the provincial gaming strategy.

For more information about the Standardbred Improvement Program, including details about the Ontario Resident Mare Program, click here.