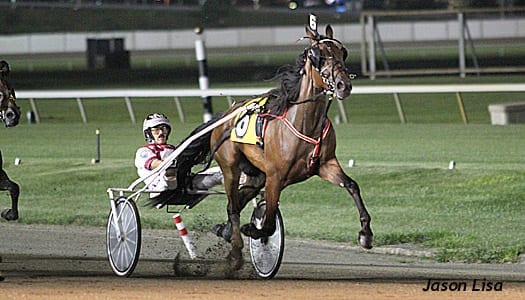 Is JL Cruze on cusp of a huge year?

Having solved the mystery of the trotter’s late-season struggles, trainer Eric Ell is expecting big things in 2016.

JL Cruze clearly wasn’t himself as he finished up his 2015 campaign with three straight losses, but trainer Eric Ell now understands why the son of Crazed went so badly off form. Tests performed after last year’s Maple Leaf Trot revealed that JL Cruze was suffering from a heart valve problem that was restricting his breathing.

“We took him up to the New Bolton Center after we got home after the Maple Leaf Trot because he just wasn’t himself,” Ell said. “Soundness-wise, he was as good as I had him all year. John (Campbell) said it was something internal, that he just couldn’t finish. At New Bolton, they put him on the treadmill and they hooked him up to all the monitors and all the breathing apparatuses and they got him up to a mile in 2:05 or so and they said he only had 60 per cent of the oxygen intake he should have had. One of the valves of his heart wasn’t working correctly, which they attributed to a bad virus.”

The vets at New Bolton told Ell that JL Cruze would be fine with rest, which Ell had already planned on giving him.

“To find this out was absolutely a big relief because we didn’t know why he was having problems,” Ell said. “In The Maple Leaf Trot, he left right out of there, went the first quarter in :26.3, and looked great doing it. Turning for home he was just empty and the same thing happened in the elimination.”

JL Cruze finished last of 10 in the Maple Leaf Trot final and was fifth in the elimination. Before appearing at Mohawk, he finished fourth in the Sebastian K Invitational at Pocono. Prior to that race, he was having a sensational year. He had won 16 of 18 races and became the first trotter in history to break the 1:50 barrier on a one-mile track, which he accomplished in the Graduate Series final at the Meadowlands. Though just four, he proved to be the top older male trotter on the year and was rewarded with a Dan Patch Award.

Ell said his first major goal in 2016 with JL Cruze will be the May 8 Elitlopp Playoff at the Meadowlands. Though a win there could mean an invitation to the Elitlopp, Ell isn’t sure yet if he will send his gelding to Sweden.

“I’m not sure about the Elitlopp,” he said. “I need to think about it and consider the size of the tracks over there. He’s not the best on the turns, so I like racing him on the bigger tracks and we’d like to keep him on the bigger tracks as much as possible this year. I wouldn’t race him on a half-mile, but on a five-eighths (the circumference of the racetrack at Solvalla, the home of the Elitlopp) I think he’ll be okay. He’s already handled Pocono pretty well.”

Whether JL Cruze goes to Sweden or not, expectations are that he could have a huge year. To win a Dan Patch Award as four-year-old is a notable accomplishment and Ell is among those who believe JL Cruze can only be better at five.

“We’re keeping our fingers crossed,” he said. “He had a lot of issues last year, including a stifle problem. He also grabbed a quarter and had some major foot problems. Right now he seems very, very good. John told me he’d make a much better racehorse as a five-year-old and told me he’d develop a lot this year coming up. We could have a lot of fun this year.”

JL Cruze is training at Kenwood Farm in Denton, Maryland. Ell said that his gelding could have “one or two” overnight races before appearing in the Elitlopp Playoff.