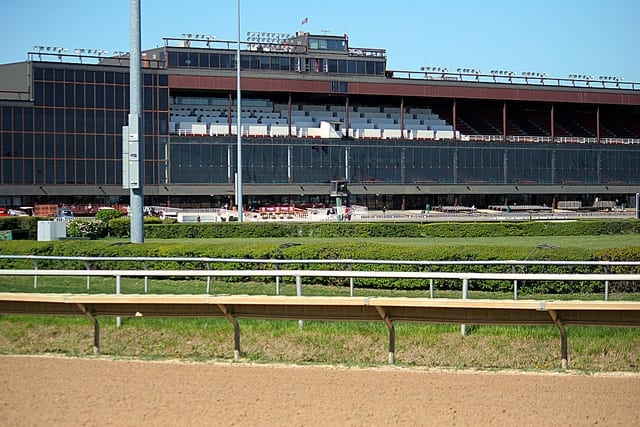 Was successful Hawthorne meet enough to save racing in Illinois?

Harness racing in Illinois still has a pulse, but unless it gets a much-needed and long-overdue transfusion of slot money via the state’s legislatures, its smaller horse stables will continue to disappear despite a successful, but short, winter meet at Hawthorne Race Course that ended last night (Feb. 6).

It will be another three months before Hawthorne, the only Chicago area track still holding harness races, plays host to another standardbred meet.

The bigger Illinois harness racing stables will scatter to Indiana, Ohio and further east before most, but not all, will return to the Chicago circuit the first week of May. Unfortunately there are many small stables that can’t afford to leave the state for three months.

For them it’ll be a struggle to stay in the business.

“I worry about the small stables like mine,” said trainer Kim Roth who has a half-dozen overnight horses. “Some of us aren’t going to make it. My horses did well at Hawthorne, so I’ll be back for the summer but some others won’t.”

When Maywood Park closed its backstretch at the end of the year, some small stables sold what they had left and got out of the business. Those who did make the nine-mile trip south to Hawthorne will now have to vacate the backstretch this week for the thoroughbreds. Their meet begins the first week of March and runs until the end of April. They’ll have another starting in October.

Having enough horses for the five-month, five-day-a-week meet is Hawthorne’s obvious concern and its director of harness operations Tom Kelley will soon be off on a recruiting trip to reinforce the horse population for the summer meet.

“I’ll be going to California, Delaware, Florida and Michigan,” said the long-time former publicity director at the now defunct Balmoral Park. “We do have some commitments for the summer at Hawthorne and some trainers plan to have a string of horses here and at other racetracks.

“One of the positives I’ll have to tell trainers is just how well Hawthorne’s winter meet went. It exceeded expectations. The horsemen filled the entry box and 90 per cent of the time we offered fans competitive 10-horse fields and that showed up in the handle.

“We averaged almost $890,000 nightly and things really picked up the last few weeks. We went over $1 million more than a half-dozen times, including three consecutive Friday and Saturday weekend cards.

“The total on-track handle was way up as well, something like 30 per cent. We had six-figure handles on-track for most of our weekends when you combine our races and those betting here on other out-of-state venues.

Tony Simone, the executive director of the Illinois Harness Horsemen’s Association said, “It’s good to see that harness racing fans have continued to follow the Illinois product. We’re very happy to retain that fan base.”

While Hawthorne has played host to thoroughbreds for 125 years, its first harness racing meet was in 1970, some 46 years ago. Ten years later, they became the first Illinois harness facility to handle $2 million and that was strictly on-track.

In the ’70s and ’80s its winter meet handles, with double-header programs on Saturdays, rivaled its neighbor Sportsman’s Park, whose backstretch butted-up against Hawthorne’s Clubhouse parking lot before the Midwest’s one-time top harness racing facility was torn down and replaced by a liquor distribution plant.

While Sportsman’s had a Cicero, IL address and Hawthorne has a Stickney, IL zip code, both racetracks sat on the west side of one of the city’s busiest thoroughfares (Cicero avenue) with the east side belonging to Chicago.

Hawthorne’s location is a big plus for its marketing department. It can be reached by public transportation and is located less than 10 miles west of downtown Chicago and a half-hour drive from O’Hare Airport.

Whereas Hawthorne is in a heavy industrial area, Balmoral Park was some 55 miles south of it in the boonies, surrounded by mostly wetlands.

“Years ago, when Hawthorne raced in the winter it was always an important meet for horsemen,” said veteran driver Dale Hiteman. “We raced for very good money and if you had a great meet there you could kind of relax for the rest of the year because the pressure was off.

“It’s great to be back at Hawthorne and go for some decent money. These horsemen in Illinois have had to struggle with all that’s been going on in our industry. Hopefully Hawthorne can expand this winter meet a little bit longer next year. That’s if they can get enough horses for it. Quite honestly, they didn’t have enough horses to race five days a week, Guys were putting in their horses every three days or so, but with such a short meet and no racing in Illinois for three months who can blame them?”

Hiteman had a strong Hawthorne meeting with 24 winners, finishing in the top five in the driver standings. He will return to compete to Indiana, but said he’ll likely be back at Hawthorne for stake events and perhaps on Sundays when Hoosier Park is dark.

Hawthorne’s leading driver, Casey Leonard, plans to go to Hoosier Park, “to drive a little, but not a lot” and will also help his father Terry with the yearlings at his farm. Relocation is not in the plans for Casey.

“I’ve got my home and a family here. I’ll be back at Hawthorne for the summer meet.”

Driver Pat Curtin plans to go to Yonkers and “give it a try.” Illinois native Kyle Wilfong now lives “10 minutes from Hoosier Park” and is Indiana bound. He’ll be at Hawthorne “on Sundays and when my stakes horses race.”

Former Maywood Park driving champion Sam Widger is “taking some time off before going back to Hoosier Park on April 1 for a month and a half. I’ll see how things are going and trust in God as far as my future after that.”

Meanwhile, Illinois harness racing still has a pulse . . . although it’s a weak one.