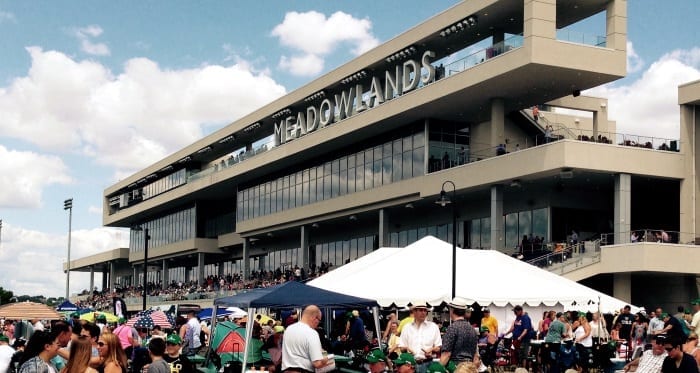 – Editor’s note: Harness Racing Update is pleased to welcome veteran racing writer Dave Little to its team. Little will provide regular coverage of the Meadowlands scene and beyond –

Business at the Meadowlands is booming of late, even though things on the track have a different look as compared with recent years.

Gone are high-class events like the Presidential and the handful of late closers that used to culminate with a big night of series finals in late February.

These are new times at the Big M, and while the talent level of the horses racing there isn’t what it once was, the handle has been superb.

Yet, business bustled to the tune of $3.035 million in wagering Friday, followed by $3.087 million Saturday. In fact, betting at the Big M has topped $3 million in half of the eight racing programs contested this year.

“And if it wasn’t for the snow storm (that hit on Jan. 23), we would have been close on that Friday night before, when we hustled through the card,” said Meadowlands chief executive officer and general manager Jason Settlemoir. “I think we would have been over ($3 million) that night ($2.6 million was bet). I’m extremely happy with what we are seeing right now.”

He has a right to be. And it’s obvious that his customers would rather have big fields with moderate talent instead of classy horses with fewer than 10 noses on the gate.

“From a handicappers’ standpoint, I think the numbers bear out that the class of the race doesn’t have a huge bearing on the amount of handle,” said Big M media relations manager Justin Horowitz. “You have to write races for the horses you have. The races that are most appealing to the gamblers prove to be full fields and competitive fields. If you start combining the upper classes, and there’s really only three open horses that are racing against five or six horses that anybody can see are a class or two below, you are really not doing the handicappers any justice.”

So the bettor is okay betting on mid-range conditioned stock if the field is big and the race competitive. But where have the classy horses gone?

“A lot of the (owners and trainers) take the winter off with some of those horses,” said Settlemoir. “But when you look around, and you look at the breeding in the industry and the number of foals that are hitting the ground, I don’t know if we are seeing a transition where the upper-end horses just aren’t there. We’ll have to wait and see as the year unfolds.

We struggle here to write the opens and the upper classes. In my opinion, you need to have at least seven starters to be able to go forward with an open. But, at least we’ve got plenty of horses right now (in the other classes) – although we could always use more. But if the horse population is there, I think you’ll see big (handle) numbers on a routine basis.”

February figures to be roses and chocolate for the Big M. Thereafter things figure to get a bit dicey. “For the month of February, I would be shocked if we didn’t average over $3 million,” said Settlemoir. “And I think March will start out good, but once the Pennsylvania tracks open, that’s when the handle will start dropping.”

Indeed, the Big M entry box will take a hit once Harrah’s Philadelphia (opening April 1) and Pocono Downs (March 19) get going. The fact is, it’s tough to fault horsemen for going to race at those tracks, given their slot-machine bloated purse accounts.

“You’ll see us drop the number of races per day depending on what the entry box will allow us to do,” said Settlemoir, who hopes to card 12 races a night once the warmer weather hits. It won’t be easy.

“We are averaging 9.68 starters per race. It kind of speaks for itself,” said Settlemoir, referring to the support he currently enjoys from his horsemen.

But with the warmer weather comes more opportunity with an already depleted horse population. As these other tracks open up, there will be more choices. Not only will the horse population be strained with the addition of the other venues opening, the customer will have more choices on where to bet his money. It is a vicious cycle not just for the Meadowlands, but also for the entire industry.

“To me, it all boils down to the average number of horses per race,” said Settlemoir. “That’s why it is so important to have the support of our horsemen.”

For now, it seems clear what the Big M wants for its fan base.

When asked if he’d rather card a full field of average horses or a five-horse field featuring a horse with superstar appeal, Settlemoir paused before saying: “That’s a tough question.”

The Winds of Change

As if handicapping wasn’t tough enough.

On the Friday, Jan. 29 Big M card, wind gusts from 20-25 miles per hour were blowing horses on the front end right down the pike. After having the wind at their backs heading for the half, foes couldn’t close a lick on the speedsters in the stretch with the stiff winds in their faces.

Curfew (1st race), Can Do (2nd), Its Huw You Know (4th), Ulster (7th) and Lauderdale (8th) all won in wire-to-wire fashion. Were they good? Sure. Can you take a look at them in the future and not be as impressed with their performances given the bias doesn’t figure to be the same way the next time they’re at the gate? Absolutely. Especially, since all winners, not to mention front-end winners, get all kinds of attention from the betting public.

And, naturally, the bias went away completely as the winds diminished after the eighth race. Tough game.