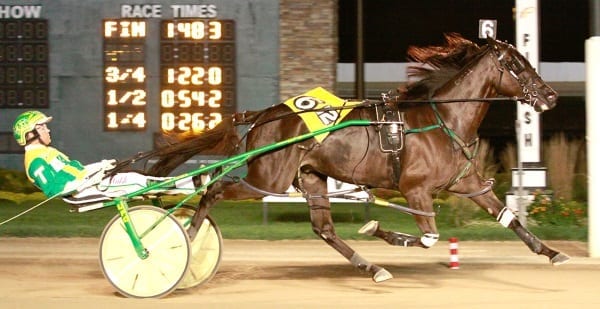 In a race that pitted brother-versus-brother and star-versus-star, there was a lot of hype coming into last night’s Jennas Beach Boy at Hoosier Park. In the end, though, it wasn’t much of a race. Wakizashi Hanover took care of that.

Indiana-bred star Freaky Feet Pete tried his best in his first tilt on the Grand Circuit, but he was no match last night for Wakizashi Hanover in the $110,250 Jenna’s Beach Boy. With Tim Tetrick beating little brother Trace, Wakizashi won by 2 1/4 lengths in 1:48.4.

It was a big night at Hoosier, where another highlight was still another win by Bee A Magician over the boys, this time in the Centaur Trotting Classic.

Even though he was nowhere near Hoosier last night, Wiggle It Jiggleit was part of the story in the Jennas Beach Boy. Wakizashi Hanover is one of only two horses to have ever beaten him and Wiggle It Jiggleit is the only horse that had beaten Freaky Feet this year. That made last night’s race more or less a battle to see who is the second best 3-year-old male pacer on the planet.

The other story was the battle of the Brothers Tetrick, as Tim drove Wakizashi and Trace drove Freaky Feet Pete.

The betting public knew it would be one or the other, making Pete the 3-5 favorite and Wakizashi the 6-5 second choice. The next lowest price on any other horse in the race was the 50-1 on Camturo Rock.

Trace took the initiative off the gate, gunning Freaky Feet Pete from the nine post while Tim settled into a two-hole trip. It seemed at times as if they were the only two in the race. Tim waited patiently, didn’t tip out until mid-stretch, and then sat back in the bike as his mount blew past Freaky Feet.

“Freaky Feet Pete is a good horse,” said Wakizashi’s co-owner Bruce Kennedy. “When you’re dealing in harness racing anything can happen in a race and when your opponent has a record like Freaky Feet Pete had you can’t take it lightly. We knew he was a dangerous horse.

“The fact that he won wasn’t a big surprise. Timmy left just enough to tell the other horse you’re not going to get there cheap. Then they both tried to set the pace for their own horses. Timmy has always been very confident with our horse.”

Wakizashi Hanover is now 10 for 16 on the year and might be in line for a Dan Patch Award if not for the fact that Wiggle It Jiggleit is out there. It’s not clear when the two will meet again. Wiggle It Jiggleit is headed to Hoosier to face Freaky Feet Pete in the Indiana sire stakes finals on Oct. 10. Meanwhile, Kennedy said the Oct. 6 Keystone Classic at The Meadows will be next for their horse.

Wakizashi Hanover is being pointed for the Breeders Crown, while Wiggle It Jiggleit’s connections say they are leaning against supplementing into that race.

As for Bee A Magician, she seems to be more machine than horse. Last night was her 61st career start and her 41st career win. She’s clearly the top older trotter in the sport, males included.

The only thing different for her last night was the presence of a new driver. Brian Sears elected to drive at Yonkers in the New York sire stakes finals, so Dave Miller picked up the assignment. Sears will eb back for her next race.

Perhaps keeping in mind that Bee A Magician has a huge race coming up in the Oct. 10 Yonkers International, Miller was content to let the daughter of Kadabra do her own thing. She didn’t really gear up until the final turn and when she did she swept past Gural Hanover. Wind Of the North made somewhat of a race of it late with a late move, but Bee A Magcian held on to win comfortably, by 1 ½ lengths. The time was 1:53.

“She’s an amazing horse,” Miller said. “She overcame a bad post (No. 9) and got the job done. It’s not easy for these mares to keep racing the boys. They are bigger and stronger and she’s one of the few that can keep beating them.”

The first of the night’s stakes races resulted in a minor upset as Sunset Glider beat 2-5 favorite Womans Will by a half-length for the Takter-Gingras combination in the $207,300 Kentucky Stallion Management for 2-year-old trotting fillies. The race drew just five horses. Sunset Gilder led throughout.

Indiana-bred Topville Cadillac won a division of the Kentucky Stallion Management for 2-year-old pacing fillies, with Call Me Queen Be winning the other. Call Me Queen Be was driven by Scott Zeron, who came right back and won the Elevation for 2-year-old pacing colts with American Passport. Trainer Tony Alagna finished one-two in the race with Mindtrip rounding out the exacta. Both were maidens coming into the race.