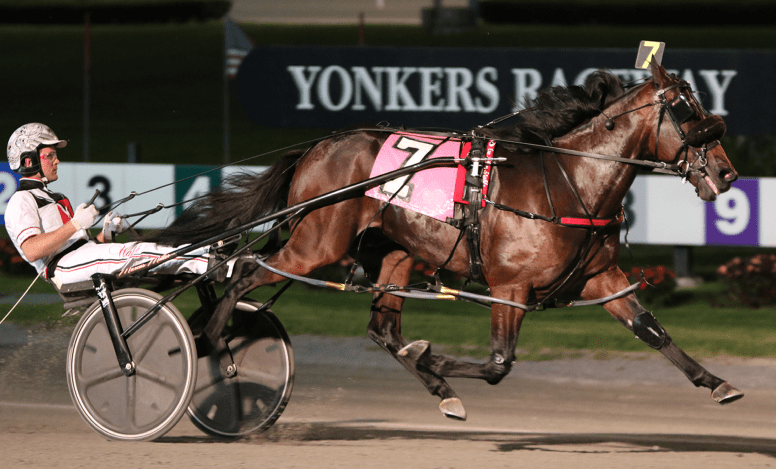 YONKERS, NY – Tom Grossman of high-powered Blue Chip Farms knows talent when he sees it, and that led him to join several others in making a recent investment in undefeated Travel Playlist. If only the stock market offered such swift and encouraging returns.

Travel Playlist, in his first race since the new ownership group was announced on Tuesday, provided an early and impressive return by storming home a convincing winner of the Genesee Valley Farm Pace New York Sire Stakes Final for 2-year-old colts and geldings on Saturday night at Yonkers Raceway. He extended his perfection to 5 for 5.

His sizzling performance as he overcame post seven in a field of seven highlighted New York’s Night of Champions for 2-year-old trotters and pacers. Each of the four New York Sire Stakes Finals carried a hefty 225,000 purse.

Non Stick also remained unbeaten as she won the Crawford Farms LLC Trot for 2-year-old fillies for her sixth victory. Allerage Echo capitalized on an early break by previously undefeated Dayson to take the Allerage Farm Trot for colts and geldings. Dime A Dance, one of three Ron Burke trainees in the Winbak Farm Pace for 2-year-old fillies, rattled off her fourth consecutive victory for Burke.

But it was Travel Playlist and the investment made in the very fast son of Art Major that created the greatest buzz during the second and last New York Night of Champions after 3-year-olds were in the spotlight two weeks ago.

Ronald Michelon remains the majority owner of Travel Playlist but agreed to move into what appears to be a blindingly bright future with Grossman’s Blue Chip Farms, Taylor Made Stallions, and Fred W. Hertrich’s All-American Harnessbreds.

“We’re looking to hit the lottery and have a stallion like the father,” said Grossman. He raced and stands Art Major, a winner of more than $2.7 million in his brilliant career.

“We are certainly interested in all of his offspring and watch them very closely,” Grossman said. “This is, by far, the most interesting 2-year-old out of this horse in many, many years.”

Travel Playlist was confidently driven by Marcus Miller, who took command early. They withstood a demanding opening quarter of 26.2 and pulled away as they spun out of the final turn for home. His new owners all but expected such domination when they dug deep into their wallets to claim a financial stake in the bay colt. Terms of the agreement were not announced.

“We paid for him assuming he had a real shot to be a top 3-year-old and sire,” Grossman said.

Grossman said the newcomers to the Travel Playlist bandwagon will serve as “advisers and cheerleaders” while Erv Miller, who remains as the trainer, plots a course that they hope will lead to the Breeders Crown.

“He’s still got a lot to prove,” Grossman said. “Obviously, he’s a very talented, fast horse and, if he’s tough like his father, he will keep doing this.”

Non Stick is another youngster with a long road ahead in his racing career and much to prove. But Jeffrey Gural, one of his owners, is so pleased with him that he was delighted the other day when he came upon a bill that was higher than expected. The bill reflected a 50 percent share in the daughter of Lucky Chucky, double the percentage he thought he owned.

Gural can be forgiven his confusion. He has a fair amount going on at all times as owner of Meadowlands Racetrack in East Rutherford, N.J., not to mention his assorted owning and breeding interests.

Gural said his visit to Yonkers, a rival track, was nonetheless a bit nostalgic. “I spent a lot of the years of my youth at Yonkers Raceway,” he said. “It’s nice to come back here and have a little luck.”

Gural thought the latest of Non Stick’s six victories was arguably the most impressive. “I thought this was a good test,” he said. “She’s undefeated, but she’s been drawing the easy division.”

Non Stick assumed an early lead and was never seriously threatened. Gural gave much of the credit to trainer Ake Svanstedt and commended his choice of driver Daniel Dube, who knows the intricacies of the half-mile oval at Yonkers.

“It’s always a smart move when you come to a track like this to have somebody who knows his way around,” Gural said.

In the race before Non Stick kept his unblemished record intact, Gural rooted home Allerage Echo as the breeder of that horse. Allerage Echo, a bay gelding by Conway Hall, won for the fifth time in nine starts with a pair of runner-up finishes.

Afterward, George Ducharme, his trainer, announced that Allerage Echo’s 2-year-old campaign was over. “That’s it, the last start for the year,” he said. “It’s been a long year. It’s time to get him some rest.”

Ducharme is confident he has not yet gotten to the bottom of Allerage Echo. “He’s done everything asked of him,” he said. “I don’t know where the bottom is right now.”

With Burke trainees comprising half of the six-horse field that started in the Winbak Farm Pace, it was perhaps not that surprising that Dime A Dance, a daughter of Roll With Joe, got the job done in 1:54.1. She was joined in the race by stablemates Mother of Art and Encore Deo.
“There’s no limit right now,” Burke said of Dime A Dance’s future. “She looks like a top horse.”