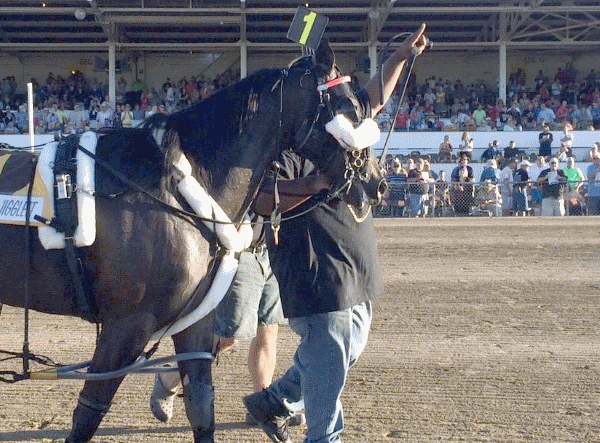 While it looks like Wiggle It Jiggleit’s racing schedule is headed for Indiana for a Sires Stakes, it is uncertain whether he’ll be coming to Canada for the Breeders Crown.
The gelding’s owner, George Teague Jr., who was returning home Friday following Wiggle It Jiggleit’s gutsy performance to win the Little Brown Jug on Thursday in Ohio, is putting together a schedule going forward. He told Harness Racing Update he is looking at October 10 at Hoosier Park for a $200,000 Indiana Sires Stake race as the next start.

“I’m going to see how he comes out of this race,” Teague said. “It was two tough-ass miles, but as of today unless he shows otherwise, he’s going to Indiana. And I think he’s got several possible races out there.”

“Thursday was definitely the toughest mile any horse has ever been, and it just so happened to be two of them in the same day.”
Wiggle It Jiggleit’s owner George Teague Jr.

Wiggle It Jiggleit is not eligible for the Breeders Crown at Woodbine Racetrack – the three-year-old colt pacing eliminations are October 17 – so it would require paying a $62,500 supplemental fee. Teague also has the possibility of staying in Indiana to race in the $75,000 The Circle City on October 23. The Breeders Crown finals are October 24.

Teague said he wouldn’t deliberately try to find an easier spot to race his horse.

“If you notice, I haven’t practiced that at all,” he said with a hearty laugh. “I went to one Sire Stakes race and that was it. Grand Circuit is where you get the best horses. I’ve supplemented and I’ve actually made money in a couple of his races this year, he’s paid off.

“If he’s going to Indiana, he’s going to face one of the best horses in the country. It wouldn’t be much chance for an easy race. At this time, no things are easy. We’ll see where we are in a couple days. It’s too early to tell how he came out of it. Thursday night there were a lot of people around him. He seemed fine. He’s been pretty awesome. He’s got great stamina. He’s got a will to win that a lot of horses don’t have. He bounces back pretty well. Thursday was definitely the toughest mile any horses has ever been, and it just so happened to be two of them in the same day.”
When asked if the final was the greatest Jug final he’s ever seen, Teague said it was hard to answer because he is biased.

“But 90% of the people I’ve run across are still amazed he was almost three-quarters of a length behind at the head of the stretch (and still won),” Teague said. “There’s nothing normal about this horse. The greatest I’ve seen in the Jug was Life Sign (in 1993). It was very similar – on the outside, digging in and getting up in the last step. This race ranks up there with that one in my eyes.”

Teague also clarified a comment he made earlier this year saying his horse had a “step up” on Somebeachsomewhere, the unanimous Horse of the Year in the U.S. and Canada in 2008.

Somebeachsomewhere retired with only one loss in his 21-race career and a host of records. Wiggle It Jiggleit broke one of those records, which Beach owned with Rock N Roll Heaven, for fastest time on a half-mile track for a three-year-old colt pacer. Wiggle It Jiggleit has won 19 of 21 races, failing to finish in the top three only once.
The comment Teague made seemed to be a slight at the horse, but Teague wanted to make it perfectly clear that was not the case and he has nothing but respect for the horse and its trainer/co-owner Brent MacGrath.

“Brent’s a top-class guy, I have a lot of respect for him,” Teague said. “Me and him are friends, buddies, and it was a compliment when I compared my horse to Somebeachsomewhere. It’s not a snub or any kind of knock against his horse. He was the greatest horse I’ve ever seen until this horse – and I’m just fortunate to have the horse that I think is greater. But in saying that it ain’t a knock towards him. The only thing I’m saying is this horse will race more in his career than (Somebeachsomewhere) did. The Meadowlands Pace went for $1 million when (Beach) raced and he finished second. The North America Cup went for $1.5 million when he raced. The money isn’t the same. Some races have been added since then, but the purses in the other races are down. This horse has made $1.8 million and that is a big accomplishment in this era because some of the purses have taken 20% to 30% hits. If that wasn’t the case, he’d have probably made $300,000-$400,000 more.

“It was a different time and Brent picked his spots well. Brent was a great manager of the horse and he had nothing to prove. Neither do I. I don’t have a stallion. For the love of the game, I think you should (keep horses racing) to showcase our breed and give a little bit back to the game. But he had more success than I did. But if my horse was still a stallion, I don’t think my mind-set would be any different.

“He was a professional racehorse when I started. I just went about it a different way – and unfortunately I did. It cost what it costs you, but I’m enjoying what he’s doing. But what I’m saying is I’ve gone to the all events I’ve gone to and all the races because it’s only myself. I’ve got no one to answer to. Nothing to prove. I think great horses don’t need to take their tracks with them, and this is a prime example. He’s won on a mile and made very good times, he’s won on a half-mile in world-record time. He’s put in a great effort.

“So it was never meant to be a knock against Somebeachsomewhere. It was almost a credit to him, the greatest horse I could compare him to because I thought he was the greatest.

“In Delaware, a lot of people came to me and first thing they said was, ‘I’m only here because of him,'” Teague added. “Somebeachsomewhere and Captaintreacherous were managed differently. I’m not saying they were a little fearful of drawing a bad post and (worrying) it could hurt their reputation. It was just different than the way I managed him. But I will grant you one thing: If he was a stud I would have raced the same races as I’m racing.”

Whether Wiggle It Jiggleit could be the shot in the arm for harness racing the way 2015 U.S. Triple Crown winner American Pharoah became for thoroughbred racing, Teague isn’t sure.

“It takes a lot,” he said. “Our game doesn’t get the media exposure. It’s hard. He’s a great story. A lot of people have related to him because they love harness racing. But the idea sometimes is to step outside your own market and grab a few other people and bring them into the game and hope they became first of all a fan, secondly a gambler and
three an owner. I hope he has a little bit of a presence that he can be something like that to the game. But it’s hard when you don’t get the exposure that thoroughbreds do. They get a lot more than we do.”