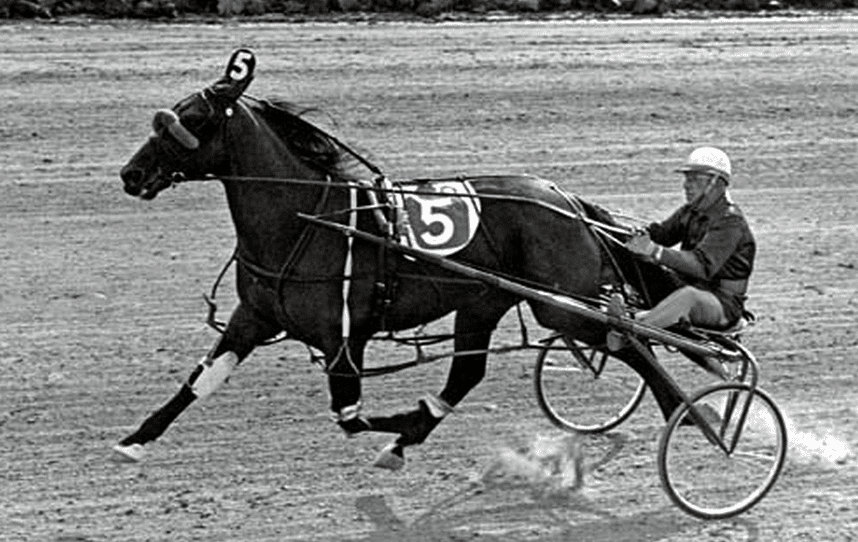 By Dean A. Hoffman
Photo courtesy of USTA

I watched the Jug final heat live. I’ve watched the replay many times. Each time the horse wearing the shadow roll and sheepskin enters the stretch, I say the same thing: “He can’t win. He simply can’t win.”

And yet he did.

Horses simply don’t come back from a deficit deep in the Delaware homestretch.

And yet he did.

You know that I’m referring to Wiggle It Jiggle It’s victory. I still don’t believe it. It was a miracle. I still can’t wrap my mind around it. I don’t believe that a horse can do what he did. A mortal horse cannot survive the trip that he had and still find yet another gear in deep stretch.

Yes, it was a miracle.

Miracles don’t happen in racing often. Racing is usually a repetitive lesson in reality. But the first Jug I saw 50 year ago was deemed the “Miracle at Delaware.” That race was won by Bret Hanover, who also overcame a tough journey on the outside to set a world record. But the real miracle of 1965 was that the Jug was contested on its scheduled date.

I was in high school in Cincinnati then and my parents consented to let me skip school for a day to go to Delaware. I rode up with my father, a longtime harness devotee. As we drove north, all we could see ahead of us were gray skies. Those clouds did not portend well for the Jug. In that era of clay tracks, when it rained they simply didn’t race. Skipping two days of school was simply out of the question.

After arriving at the fairgrounds, Dad and I meandered along the backstretch, a tradition over the years at Delaware. I saw master horseman Curly Smart, a trainer who served as Delaware track superintendent, walk onto the backstretch. He thrust a pocket knife into the mud to see how far the moisture had penetrated.

He walked off the track, then said with a mischievous smile to onlookers, “Ya reckon all this rain will be good for my sweet potatoes?”

I didn’t give a damn about his sweet potatoes. I wanted to see Bret Hanover. Three weeks previously, I had seen Bret suffer the humiliation of losing two of three heats to Adios Vic in the Horseman Futurity at the Indiana Fair. Those were only the second and third losses of his career, and the first time Bret didn’t take home the trophy. What would Bret do in the Jug?

Before we could answer that question, we had to know if the Jug could even be raced that day.

But Curly Smart got busy and commandeered county highway graders. They peeled the muddy surface off in great curlicues that were pushed to the outside of the track. The graders peeled until they reached dry ground. Then they began to harrow. The races would indeed go on.
Early in the racing program, the water truck made a few circuits of the track and the thousand in the stands applauded. It’s the only time I ever recall hearing applause for the water truck.

Bret did his thing. He was parked the whole first half-mile of the first heat, then disdainfully went three wide coming to the half and seized command. The outcome was never in doubt after that, but the final time of 1:57-the fastest race ever on a half-mile track—was astonishing.

Yes, that was truly the miracle at Delaware. But I saw another one on Thursday.

Full disclosure: I wanted Wiggle It to win. I don’t know the Teagues well, but the whole clan strikes me as having humility and class. While those are admirable qualities in life, they don’t always win horse races.

I’d seen many other memorable Jugs since Bret’s in 65, of course. The Jug between Most Happy Fella and Columbia George in 1970 was a slam-bang duel stretching over three grueling heats.
The upset of Albatross in ’71 was memorable, as were the upsets by Fake Left over Western Hanover and P-Forty Seven over Rocknroll Hanover.

Then, of course, there was the lionhearted Life Sign winning in 1993. That Jug was almost like a morality play. The colt’s owner George Segal and trainer Gene Riegle came oh-so-close to winning the Jug with Western Hanover the previous year. The widely-respected Riegle, a Buckeye native, had never trained a Jug winner. But Life Sign faced a powerful troika from the stable of controversial Canadian trainer Bill Robinson.

In the ’93 Jug final, driver John Campbell knew the trouble that awaited him and he sent Life Sign in search of the front end. The colt failed to reach and wound up parked. Campbell tucked Life Sign in for few seconds past the first quarter, then came right back out to launch a first-over bid.

Such tactics don’t work at Delaware. The pacesetter is then holding all the aces, and the first-up horse is cast in the role of joker. The challenger usually folds on the final turn.

But Life Sign didn’t know the plot and didn’t realize that he was supposed to fold. He surged in the final strides to win the Jug and set up an uproarious celebration.

Wiggle It obviously didn’t know he was supposed to fold after being parked the second half either, but he did it two heats in a row on Thursday. He wore down Artspeak in their elimination heat and then found himself facing the same dilemma in the final.

It’s certainly no secret that WIJI wasn’t as smooth as silk in the turns at Delaware. In the final he got away third and made a bad bobble in the middle of the first turn. Lost For Words grabbed the lead. David Miller knows how to win races at Delaware and sure he wasn’t in a hurry with Lost For Words as long as he was unchallenged.

Montrell Teague knew he had to make it a race. Otherwise, he had no chance. Once Montrell stepped on the gas past the quarter, Wiggle It paced right to the leader, and even poked his head in front as they passed the half.
But Miller was not about to let Teague go by him. He had the favorite right where he wanted him.

The video of them pacing down the backstretch is something everyone must see. Over and over again. And then a few more times. It’s as if two horses had become one, as if they were hooked team-to-pole. They went into the final turn evenly matched.

They didn’t, however, come out of the turn evenly matched. Lost For Words started to put away his pursuer. Wiggle wasn’t wiggling; he was faltering. He seemed to be following the usual script for a pacer parked through such brutal fractions.

Halfway through the stretch, Wiggle found something only rare champions have. He called on a will to win that was far stronger than the fatigue he was feeling. He sent forth a late-stretch urge. He timed it perfectly. It carried to him to the wire first. It carried him to victory.