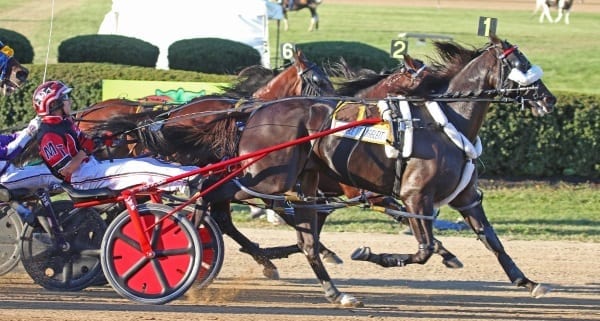 DELAWARE, OH – You couldn’t script a harness race any better than the way the 2015 Little Brown Jug unfolded.

Doing it the tough way for the second time in a couple of hours following a hard-fought elimination win over Artspeak, heavy favorite Wiggle It JiggleIt survived an all-out war with first elimination winner Lost For Words to nose that rival out right on the wire in 1:49 3/5.

It’s hard to describe what was witnessed at the Delaware Fairgrounds. There were no breathers in this race as Lost Ford Words was sent out on a speed mission by driver Dave Miller as the gate pulled away. Wiggle It JiggleIt got away to a “bad third” according to winning driver Montrell Teague which would force his hand to take the overland route again, same as he did in his elimination where he battled toe-to-toe with Artspeak and put that foe away late.

Lost For Words rocketed off the gate and paced the first 1/4 in 27 flat with Wiggle It JiggleIt content to sit third for that opening frame. Lost For Words reached the 1/2 in 54 1/5 with Wiggle It JiggleIt coming to call on the outside and Yankee Bounty in the pocket. Artspeak was on Wiggle It JiggleIt’s cover heading for the 3/4 and looked momentarily like he had a shot. The two leaders sprinted as much as they could go down the backstretch and when they hit the 3/4 as a team in 1:21 1/5 it became apparent that the sustained battle they had engaged in would yield the winner.

Around the last turn and for most of the stretch it appeared as though Lost For Words had inched away to Little Brown Jug glory, to the point where winning trainer George Teague said he “dropped his eyes down and stopped watching.” But right on the shadow of the wire with 46,721 fans roaring, Team Teague’s superstar sophomore surged up and etched himself a place not only in Little Brown Jug history, but also harness racing history in what is sure to go down as one of the greatest races ever.

“He’s the gutsiest horse I’ve ever seen,” jubilant winning driver Montrell Teague exclaimed. “He’s just special and does not want to lose. He just digs down deep within himself and always finds something more.”
“I thought he was beat,” said the winning trainer. But then I was told he was coming back. I still cannot believe he won today. I’ve trained a lot of horses but I’ve never seen one like him. He is actually much better with a target and that’s why we have always wanted to race him from off the pace. It’s like he thrives on it.”

Teague added that Wiggle It JiggleIt will go to Hoosier next where he could engage in another battle royale with the other star Indiana-bred sophomore pacer Freaky Feet Pete. “They actually wanted us to come there this weekend, but this was the one I really wanted to win.”

Wiggle It JiggleIt was winning for 18th time in 20 career starts and raised his career earnings to close to $1.7 million for owner George Teague Jr. of Delaware.

Lost For Words took full advantage of his inside draw to lead from start to finish in the first Little Brown Jug elimination to win as the prohibitive 1/2 favorite.

The Brian Brown-trained Well Said colt who motored to the front and set a 27 flat first 1/4 fraction, was never in danger after backing the pace down to the 1/2 in 55 3/5 and repelling 2nd choice Dudes The Man’s challenge in the second 1/2.

Lost For Words kicked home in 54 4/5 and kept pocket-sitter Yankee Bounty at bay by 1 1/2 lengths. Rockin In Heaven, who sat third on the inside the entire trip, finished 3rd beaten three lengths.

Winning trainer Brown said he felt confident when his horse hit the 1/2 mile pole. “I wasn’t nervous with those fractions,” he said. “I’d have been a lot more nervous if the first half was paced in 54 or quicker.”

Lost For Words returned $3 to his many backers and combined with Yankee Bounty for a $10.80 exacta payoff. The trifecta with Rockin In Heaven 3rd returned $38.60 for every $2.

The win was Lost For Words 5th in 12 starts this year and the winner’s share of the purse raised his seasonal earnings to more than $390,000 for owners Country Club Acres, W. Robinson, R Lombardo and Strollin Stable, all of Ohio.

Scott Zeron indicated in pre-race interviews that he was intending to send Artspeak right to the front and do everything he could to beat Wiggle It JiggleIt in an effort to draw the rail in the final.

True to his word, Zeron sent Artspeak and that duo never let up and it took a superior effort by Wiggle It JiggleIt – punctuated by a 26 2/5 third quarter throwdown – to beat them. It would take a track record 1:49 2/5 performance by Wiggle It JiggleIt to dispatch Artspeak. That clocking also equalled Rock N Roll Heaven’s stakes record.

Winning driver Montrell Teague gave all the credit to his charge following the victory. “Hats off to Wiggle It JiggleIt,” he said. “It didn’t work out as much as I wanted to. He was really strong behind the gate, so I figured I’d float out anyway and see where Artspeak was. I saw that he went out there strong, so I was just ducking in and I’m glad that Matt (Kakaley, driver of Papparazzi Hanover) helped me out a little bit because I could have been parked.”

When Artspeak made the front immediately, it became apparent on the first turn that Zeron was intent on leading and was ready to leave anybody that had different ideas parked in no man’s land. When My Hero Ron grabbed the pocket early and Wiggle It JiggleIt tucked in third, it was obvious that Montrell Teague would need to send his gelding first up and that he did as the field hit the 1/2 in 54 3/5.

Down the backside Artspeak did everything in his power to keep his rival parked but Teague turned up the heat to the tune of a sizzling 26 2/5 third 1/4 and Wiggle It JiggleIt poked a neck in front at the 1:21 3/4 pole.

The race was far from decided at that point as Artspeak gamely held his position, but the taxing third 1/4 got the better of him late as Wiggle It Jiggles it edged away in the stretch to win by 1 1/4 lengths in 1:49 2/5 over a game Artspeak. My Hero Ron was nosed out of 2nd.

The popular winner paid $3 to win and combined with Artspeak for a $4.20 exacta payoff. The trifecta combo returned $9.

French Laundry stepped out of stablemate Pinkman’s shadow in a big way here Saturday, easily winning the $126,000 Old Oaken Bucket and setting and lowering the world record for a 3-year-old trotting colt on a half-mile track in the process.

Under a confident drive by Yannick Gingras, the sophomore son of Muscles Yankee took over the lead just past a 28 flat opening 1/4 and was never seriously threatened. He slowed the pace to the 1/2 – reaching that station in 57 2/5 – then threw two quicker quarters at his opponents coming home and coasted to victory in a new standard of 1:53 4/5.

The former world record of 1:54 1/5 was previously set by Archangel in 2012. French Laundry’s time also established a new track record at the Delaware County Fairgrounds, bettering the previous record of 1:54 2/5 set by Triumphant Caviar in 2009.

Late-closing Andy Ray, in rein to Tim Tetrick closed late for 2nd on the far outside and early leader Mesmerized held on for third. This race was all French Laundry though and his owner Marvin Katz praised the new world record holder in the winners circle.

“This colt is definitely not as temperamental as (his dam) Creamy Mimi,” said co-owner Marvin Katz. “She could be cantankerous and be a handful. This colt is not like that, but he does have her ability. He has showed that just by making half a million dollars.

“This year he has just had some bad luck. That includes racing luck and some bad draws. Like the outside in the Hambletonian for instance. But we always knew he was talented and are very pleased with his win here today.”

The win was the fourth this year in 14 starts for French Laundry and increased his season’s earnings to close to $212,000 and boosted his lifetime earnings to more than $500,000 for Katz and partners Christina Takter, and John and Jim Fielding. All three of those partners also form a good chunk of the group that owns Pinkman, this year’s Hambletonian winner.