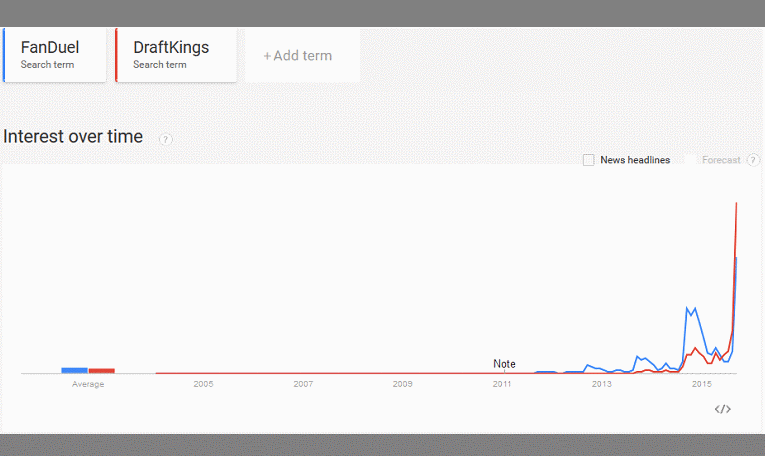 Daily Fantasy’s “Threat” Might Be Overblown, But Racing Needs to Learn from It

It’s time for a quick Brush and Crush pop quiz.

What were you most likely to see this past week?
a) Your spouse
b) Your children
c) A FanDuel and Draft Kings commercial

If you answered c, you are not a bad husband, wife, father or mother; you simply own a television.

In the one week before the NFL season, DraftKings had the highest ad spend compared to every other advertiser. Fan Duel was number seven. Between them, almost $30 million was spent on TV ads. This spend does not include web, direct mail, carrier pigeon or whatever else they’re spending on. This is the real deal.

It is estimated by Eilers research (a leading consulting firm in the gambling space) that “DFS” companies like DraftKings and FanDuel, who only began doing business 4 or 5 years ago, will achieve $14 billion in total handle by 2020. All of Thoroughbred racing in North America does only $11 billion; harness much lower than that. Yes, it’s big.

With only so much disposable income available for gambling, and with the economy still sputtering along at 2% growth, it’s that number that’s worrying some people in horse racing. After all, “DFS” is a skill-game, and attacks the skill-game gambling market. Horse racing is a skill game, too. That argument has merit.

However, it is probably much too simplistic. There’s the obvious issue with Daily Fantasy – political risk. Yes, it has a carve out with the Unlawful Internet Enforcement Act, but it does not mean it’s safe from crippling regulation. Land-based casinos spend millions lobbying and have an audience, puritanical interests abound in Congress, and let’s face it, this is a world where some politicians want to ban the size of some soft drinks. It’s not a stretch this growth can be politically stifled.

Further, gambling games are fun when you have a chance to win some money now and again. Slot machine takeouts were once 15 to 20%, but have come down to 2, 5 or 7% for this reason. You can’t break people mercilessly and expect them to come back (just ask horse racing). There’s been research showing the sharks in “DFS” are happily munching on the fish, and some expect the fish – sometime in the future – to look for new waters.

And there something else that we should never lose sight of: Racing is racing, not “DFS”.

Next week, 40 thousand or so will visit the Fair and watch a harness race, the Little Brown Jug. They will be there to bet trifectas and superfectas, to watch the eliminations, trying to find a winner. Some will be clocking warm-ups, others will be scouring the backstretch for tips on who is live. This process, or something like it, will be repeated in Ontario, New York, and dozens of other jurisdictions where horses are raced. This is so unique, and so different to “DFS”, it’s barely in the same zip code and it is this uniqueness as a betting game that’s a monster asset for the sport of horse racing. Because if it, I suspect “DFS” is not as big a threat as people tend to imagine.

Having said that, it doesn’t mean racing does not need to fight for market share, or wrap itself in the cushy status-quo blanket it seems to like so much. What Draft Kings and FanDuel are doing should be making the sport take notice, and take notes. You don’t grow handle from $400 million two years ago to several billion (projected) this year without doing something right, and this case study allows us to learn a lot about what makes skill game gamblers tick.

Let’s look at a few of these items.

In my view, racing has to drop this widely held view and work within a new framework – time between races is not an issue at all. If on-track folks are a target market to keep engaged, partner with another track and run races every ten minutes, sell programs with both tracks in them, etc. But don’t throw the baby out with the bathwater.

“Takeout” – It’s well known that takeout rates in harness racing are clearly high. Again, as we all know, as takeout moves higher, the payoffs to customers grow lower. Over time, these customer’s bankrolls are broken, and sooner or later they get tired of losing money and leave. DraftKings and FanDuel and others have kept takeout in check, with some games as low as 5% rake. As well, they pay out to many, whereby a fellow or gal can field a decent team and get paid. For example, I played last weekend, and a team I fielded came 11,457th of 40,000. I made most of my entry fee back. Horse racing’s 22% blended takeout needs to come down and it need to focus on customers and repeat visitors, just like “DFS” companies do.

“Information and Resellers” – Type in “fantasy stats”, “fantasy strategies”, or “fielding a DFS team” in Bing. You’ll find hundreds upon hundreds of links. These links provide exactly what they say they will. Potential customers can learn the strategy, use line-up makers to field teams, get news, and just about anything else they need, quickly, and a lot of times for free. Resellers who have proprietary algos or software are in high demand, and with “DFS” becoming more popular, innovation from the private sector is vibrant. Sports leagues encourage this ecosystem, as do the companies themselves. Racing needs an innovation task force where their proprietary data is able to be unleashed on customers in a similar fashion. This is a sport that until very recently blocked replays from being shown to customers, and in many cases still hides live video behind a paywall. We need more outside the box thinking regarding this.

You have no doubt heard about Daily Fantasy for some time now. Maybe you even signed up and played NFL week one last weekend and enjoyed it. Racing is probably rightfully becoming more and more aware of the threat to its revenues from this new form of wagering, and being vigilant is good, but horse racing’s uniqueness as a gambling game is formidable; if it is done correctly. Learning from FanDuel, DraftKings and others, how to do things more correctly is something racing needs to embrace and be open to. When you learn what makes skill game gamblers tick, you’re on to something. Ignoring this opportunity is short-sighted.