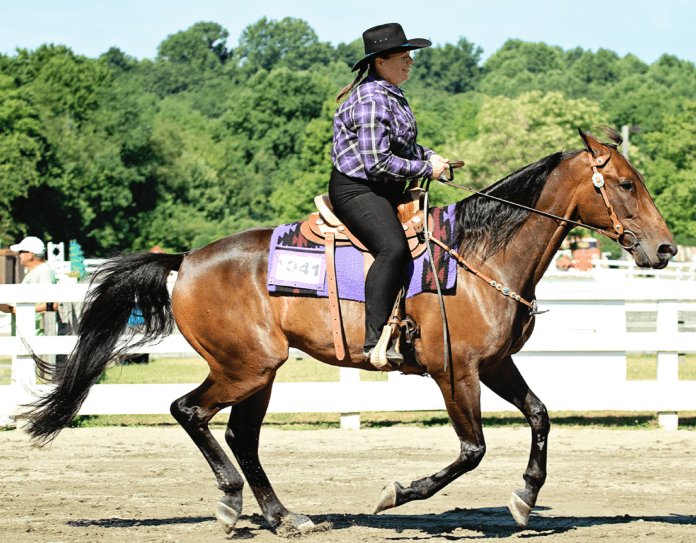 Anyone who has followed harness racing at tracks like Chester, the Meadowlands or Freehold Raceway over the past decade is sure to know the name Mighty Young Joe. To some, the 12-year-old may seem like your average mid-level pacer, but when teamed up with his lifelong trainer and driver Stacy Chiodo, who also happens to be his owner Pam Menosky’s daughter, “Joey” is a force to be reckoned with. Together the pair have set two world records on the racetrack and on Aug. 9 they earned their newest accolade as horse show champions at the SPHO-NJ’s National Standardbred Show at the Horse Park of New Jersey.

A lifelong equestrian, Chiodo got her introduction to Standardbreds at 16-years-old and began working for trainer Ross Croghan a few years later. She took out her trainer’s license in 2002 and went out on her own a year later.

Little did Chiodo know that just a year after going out on her own, she would meet the horse that would change everything. In 2004, the same year she began her career as a driver, Chiodo and Menosky purchased Mighty Young Joe as just a yearling at the last sale held at Showplace Farms.

Fast forward three years to 2007, Joey was a solid 4-year-old with 11 wins already under his belt and Chiodo was making her mark as a female driver. On Sept. 16 of that year, she set a world record for a female driver on a 5/8-mile track when she guided the Carl Cito-trained Riki Road N to victory at Chester in 1:52.3.

“I was really happy when I set it with Carl’s horse the first time,” the Jackson, N.J., resident remarked. “But, I said to my mom, ‘I really thought I’d set it with Joey.’ We had so much to do with the horse, being we bought him, trained him and my mom owned him.”

Not even 24 hours later, Chiodo’s wish came true as she drove Mighty Young Joe to victory at Chester in a new world record time of 1:50.3, which was a world record for a female driver on any size track.

“The fact that he came back the very next day and broke it by two whole seconds, that was pretty cool,” Chiodo enthused. “After we saw he went that fast, I thought, ‘Wow, I’d really like to break 1:50 with him.’”

Due to some soundness issues with both Joey and Chiodo, it would take several years to achieve that goal.

“He had soundness issues and we thought he was retired a couple of times in his career,” the conditioner remarked. “He always ended up making it back, but never to that caliber where you thought he would throw in some speed miles.”

In August of 2013, it was Chiodo’s soundness that would put the pair on the bench. She was kicked in the knee by a horse and dislocated her lower leg, which required a total knee construction and a lengthy lay-up.

“I needed a total knee reconstruction, with two ligaments replaced and two repaired, and it’s still not right to this day,” Chiodo commented. “Joey had time off while I was off because my mom didn’t want anyone else to drive him. I said, ‘You know Mom, he is pretty good right now and this is going to take a while to heal.’ But, she said, ‘No, he is your horse, so turn him out until you are ready.’”

The layoff seemed to do them both some good because in 2014 Mighty Young Joe was better than ever.

“Last year had to be the best of his career,” Chiodo said. “Maybe not by money earned, but by the times he threw together. He was the soundest he had ever been in a long time and he was just putting back-to-back some pretty wicked miles. I knew he was getting close to [breaking 1:50].”

On May 3, 2014, just a few hours after fans cheered California Chrome to victory in the Kentucky Derby, history would be made in the harness racing community as Chiodo steered a now 11-year-old Mighty Young Joe to a new world record for a female driver of 1:49.3 in a C-1 at the Meadowlands.

“The race panned out perfectly that night,” she recalled. “It was a great feeling! I would never have accomplished any of this with out the love and support of my mom. Thinking back, it seems impossible to repay my parents for everything they have done for me. I hope a half a million puts a dent in it!”

Joey was turned out sound at the end of the Meadowlands meet last year and made a few starts in 2015, but was not quite the same. Chiodo couldn’t shake the feeling that something was off with Joey and she had him x-rayed in April after the Dash for the C-Note finals. X-rays revealed a fractured sesamoid, which would result in the popular bay being retired from the racetrack for good.

“It was a clean break in half and they decided because of his age surgery wasn’t really an option,” Chiodo remarked. “It would be a very hard injury to come back from anyway. He had two months stall rest, a small amount of hand walking and short paddock turn out. He came sound just in time to get ready for the horse show.”

The decision to give Mighty Young Joe a second career as riding horse was an easy one for Chiodo, as was taking him to the popular National Standardbred Show.

“He is the kind of horse that needs a job,” she explained. “We had always gone and watched the Standardbred show and seen how much enjoyment people got out of showing them. They had so many great stories of their horses’s past racing careers. Joey was so well known around the racetrack, we thought if we could get him in some classes that everyone would appreciate seeing him there.”

Mighty Young Joe took to his new career rather quickly. The pacer was a bit nervous about being saddled initially, but relaxed after the first few rides and had no problem trotting.

“He trotted right off,” Chiodo commented. “He was never one to pace free-legged. It just goes to show how quickly you can teach them to ride. Between his recovery and my schedule, I didn’t get a chance to get on him too many times. At most, I rode him eight or 10 times before he went to the show and I thought he did pretty damn good!”

Good was an understatement. Chiodo originally only planned to enter the gelding in a handful of classes for fun. Participating in the Fresh of the Track, War Horse and Rookie divisions, the pair ended up competing in 12 classes that included both riding, driving and in hand. They earned ribbons in 11 of those classes and were champion in the Rookie division, which is designed for horses new to showing.

“Helene Gregory [wife of driver/trainer Jeff Gregory] is the one who told me to do the Rookie Division. I wasn’t even going to do that one,” Chiodo said with a chuckle. “I was actually impressed by how well he drove, doing the three different trots. I had never competed or even seen any pleasure driving classes ever!”

Mighty Young Joe achieved another first at the National Standardbred Show when he cantered under saddle for the very first time. The crowd’s enthusiasm was overwhelming as they cheered and applauded for the veteran gelding as he accomplished a feat Chiodo had yet to practice with him at home.

“I did it once the week before on the lunge line and it did not go well, so I didn’t think it was a good idea to try it on his back” she recalled with a laugh. “Helene Gregory and [Freehold Raceway Assistant Race Secretary] Rob Pennington were like, ‘Go, do it!’ I was like, ‘Okay, but I hope you have an ambulance on hand here?’ He did it so nice and picked up the correct lead and everything!”

After such an impressive and enjoyable show ring debut, the unstoppable team of Chiodo and Mighty Young Joe will be back for more.

“I will give him the rest of the year to heal up some more, but I am looking forward to going back to the show next year,” Chiodo said. “We both really enjoyed it. Hopefully, I will have time to work with him a little more before next year, maybe work on the canter a little more and take it from there.”