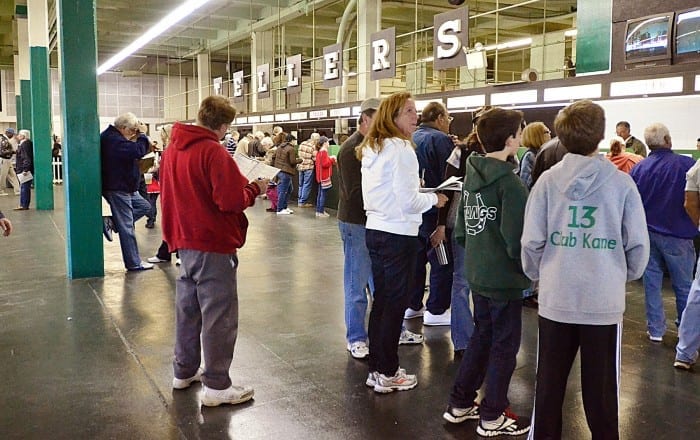 The Trot Harness Racing Survey: Give Us Value For Our Betting Dollars & We Will Patronize the Sport

This spring, the fine folks at Trot Magazine asked over 300 horseplayers a set of questions relating to harness racing. In general the main focus was what they liked, what they disliked, and what they think harness racing could do better for them as customers. With horse racing so concentrated on race date fights, slot machines, foal crops, and everything else on the supply side, it’s nice to hear from the people who support the purses with their hard-earned dollars once in a while. The respondents were a pretty good representative sample, too, with the following characteristics:

Now, let’s take a look at a few of the responses.

“What would encourage you to bet more on harness racing?” With 5 being “agree very much” and 1 being “agree very little”, lower takeout led the charge, with an average score of 4 out of 5. This was followed by more competitive racing with a score of 3.8.

These top two responses are indicative of something referred to in gambling circles as “horseplayer value.” A more competitive field allows for a more value oriented choice to be made, which may yield long-term profit. Lower takeout, by definition, increases value by increasing payouts to customers so their bankrolls last longer. It’s no secret the harness pools have had value eroded of late with high favorite hit rates and a subsequent low return on investment per dollar bet, so the answer to this question should probably not surprise anyone.

On the same 1 to 5 scale, the question “How much do you like the following wagers?” led to some interesting responses. Win betting ranked first with a score of 4.1. In last was show wagering – tied with Super High Five wagers – with a 2.4. We expect new bets like the Super High Five to be well down the list (horseplayers are a creature of habit), but a staple like show wagering (which has been around for well over 100 years) scoring so low might be a tiny bit surprising to some. However, it should not be. Show wagering in harness racing provides almost no value whatsoever. First, with high chalk hit rates, show prices of the $2.40 variety are commonplace. Second, breakage – an added horseplayer tax on winning bets – is most pronounced in the show pools. Show ROI for any bettor is usually much, much lower than win ROI.

In the HANA Harness survey several years ago, new types of bets were shunned for various reasons, and in Trot’s survey, most of these new proposed bets were too of no interest – except for two. “Futures Betting for Big Races” scored a 3.0, as did “Fixed Odds Betting.”

The common theme with these two answers needs to be examined. First, futures betting – for Stanley Cups, the Derby, the Super Bowl and myriad other events – are very popular in sports betting, and exchanges like Betfair have made these bets more and more accepted, as well. Second, one of harness racing’s big betting issues is the toteboard, where 5-2 shots at the gate can end up at 4-5 at the half-mile pole when the money finally all comes in. This is terrible for “value” seekers (there’s that word again) and it has angered players for years. This response is likely their pushback.

There were many other interesting answers, relating to lack of accountability of the judges, the disdain for post drags, and other issues. However, those three items were a pretty good representation of the survey.

What should be done about the above? To address these bettor concerns, I don’t think it’s as difficult as insiders think, or would lead us to believe, quite frankly.

If takeout is lowered to 10%, we’re at $1,900 less revenue per card, if (and this, over time will not happen; handle will go up) handle stays exactly the same. Seriously, with $100,000 in purses a card, and millions upon millions of dollars in slot money, you are going to anger customers so much, and cause them so much grief through lower payouts that they move on to sports betting and other games, over $1,900 a card? That’s barely 1/5th a purse for a single race at some of these tracks.

Similarly, the other main concern – playable races with proper fields – is fixable to a large extent. Why are tracks carding two six-horse eliminations for a 12-entry stakes race? Those are two races that need not be raced. Races can be seeded, you can race one ten-horse elimination, or come up with a better way. Why are tracks carding 14 or 16 race cards, with half of them unplayable, centered around 3-5 shots? Card better races, and take in more dollars, by encouraging the bet to grow. This seems common-sense, yet it is elusive in much of the sport.

As for show wagering, I have often wondered, why does harness racing even have show wagering? Seriously. The pools are tiny, and these pools have value eroded so much through breakage, it’s a lost cause. Some say harness racing needs a show bet so people cash tickets, because cashing tickets entices them to come back. If that’s true, wouldn’t harness racing be handling more than the eminently tougher-to-cash-a-ticket Thoroughbred racing? Bets that make bettors slowly go broke – especially newbies – should be sent out to pasture. You’re not doing your customer base any favors by helping them lose more money.

As for new types of wagers, fixed odds betting – like exchange wagering – attacks late odds drops and helps add to a bettors first love, win wagering. Win wagering, especially with fixed odds, is easier to beat and attracts a whole new legion of people who bet sports; e.g. those who bet the Pats -140 on Friday and are locked in at -140 in Sunday, even if the offensive line is out from eating bad clams. I understand this is more complex than some other fixes, and horsemen groups balk at such changes, but if harness racing is serious about trying to increase its betting base, it better be worked on soon.

Harness racing’s customers are probably as frustrated as any when taking these surveys. They become the old Yogi Berra line, “I wish I had an answer to that, because I am tired of answering that question.” They’ve been telling the sport for years and years in black and white what they want, and in the majority of cases it falls on deaf ears. At times lip service is paid to the customers of the sport, sure; at times nice things are said about “change”, but when bettors open their ADW account, or head to the track Monday evening for a few races there is no change. They are still betting into egregious takeout rates, they are still looking at a five-horse field with a 2-5 shot, they are still seeing late odds drops.

This is probably why in the final Trot magazine survey question, only a third of the respondents agreed that “Horse racing respects me as a customer.” And remember, that’s answered by people who are still wagering, not the people who were so frustrated they headed to the exits a long time ago. You can’t poll the invisible.

Harness racing constantly wishes they had the customers they want, not the customers they have. That attitude is flawed and will continue to be flawed. Harness racing must change. Customers will show you the way, and if racing opens its mind, listens and acts, perhaps some of the lost bettors will one day return, and the existing customer base will bet a little more frequently.