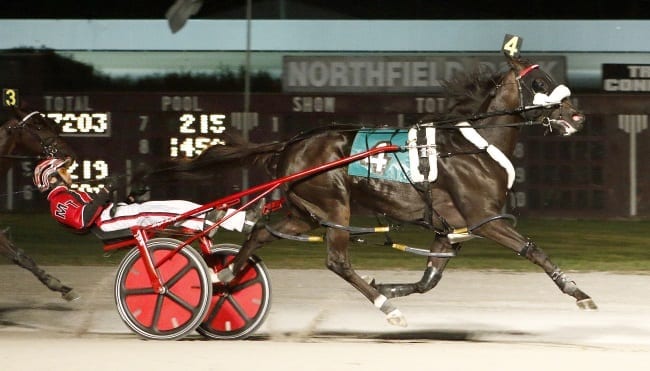 Not that he really went anywhere, but if there were any seeds of doubt planted from his loss in the Cane Pace last weekend – which was induced by a destructive early speed duel – those doubts were erased by another track record performance in the $405,000 Milstein Memorial at Northfield Park last night.

The sophomore pacing star motored around the Cleveland oval to an easy 1:49 3/5 win, demolishing the previous track record shared by Griffindor and Hare Craft by more than two full seconds. The sophomore Mr. Wiggles gelding paced the fastest mile ever by a three-year-old over the 1/2 mile track and in doing so easily repelled a first-over challenge by his North America Cup nemesis Wakizashi Hanover.

Winning driver Montrell Teague, who had come under some criticism for his drive in the Cane on social media, indicated that vindication was sweet in his winners circle interview. “Yeah, to bounce back like that and get back in the winners and quiet the doubters, it’s amazing,” he said.

Teague eased WiggleIt Jiggle It off the gate in third as Lyons Levi Lewis and Lost For Words battled for command to his inside. When the 1/4 was passed in 26 1/5 by leader Lost For Words, Teague had moved his charge off the pylons and pointed him for the top. WiggleIt Jiggle It slowed the pace to the 1/2 by taking a 29 1/5 breather which Tim Tetrick, in rein to Wakizashi Hanover sensed so he quickly moved him first-over from 5th to challenge the leader.

That’s when WiggleIt Jiggle It really turned it on. With a 27 1/5 third quarter, he turned away his first-over attacker and turning home it appeared briefly that only Lost For Words, who was primed to take a shot up the passing lane might have a shot at an upset. But when they straightened out and WiggleIt Jiggle It set sail for the wire it was obvious there would be no challengers down the lane. A 26 4/5 final quarter sealed the deal for the Meadowlands Pace winner who finished 1 1/2 lengths in front of Lost For Words. It was another 1 ½ lengths back to Wakizashi Hanover in third.

Teague said he is always looking to save his horse as much as possible – last week’s early duel notwithstanding. “I’ve been telling dad that we were always thinking about breaking records and stuff like that. I said I’d rather have him for the long run. So I take care of him as long as I can and we’ll see him later in season. I just want to take care of him as much as I can.”

Teague, who indicated that WiggleIt Jiggle It, was asked about a possible Battle Royale of Indiana-Breds in match with Freaky Feet Pete – who set a track record of his own at Hoosier on this night – this fall. “He’s definitely the main competition out there by far,” the winning driver noted. That matchup would have “Race of the Year” written all over it if these two stay fit and sharp leading up to the race.