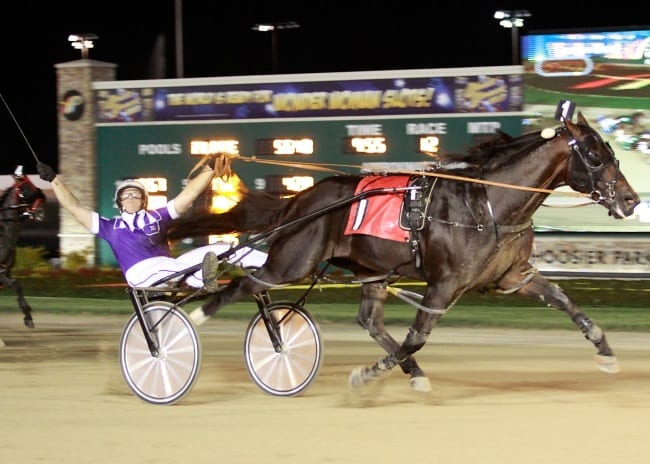 While the race winner was a comfortable 2 ½ lengths in front at the end of a 1:48 4/5 mile, how he got there was anything but easy. It’s not often you see a horse rally from 8th on the rail at the 3/4 – with three horses in front of him on the rail and four others racing to his outside – to win at any track. But J K Endofanera and Miller pulled it off in exciting fashion in the prestigious race at Hoosier Park last night.

Miller, who deftly maneuvered that 2014 North America Cup champ off the rail around the final turn to give him a chance, said afterwards that things looked bleak as they approached the 3/4 pole. “The race didn’t quite shape up like I thought it would,” he explained. “Heading up the backside I was a little worried. In the middle of the last turn I said: It’s just up to God now because we were buried on the rail, we had no shot and then things just opened up.” Miller, who is no stranger to Hoosier Park noted that his previous experience over the oval helped. “I definitely know the track and the stretch here is such a long stretch. We use it to our advantage.”

The Dan Patch was a race with plenty of action throughout starting with both Lyonssomewhere and Bettors Edge blasting off the wings of the gate at the start. When they reached the opening quarter in a swift 25 3/5 Bettors Edge had a clear lead but soon Lyonssomewhere would pull the pocket and head for the top with the ageless veteran Foiled Again in hot pursuit. J K Endofanera, who left third and was sitting third at the 1/4 stayed in and was 6th and buried at this point. Foiled Again cleared just past a 53 1/5 half and was soon under siege as Clear Vision was making a bold bid that it was apparent Foiled Again couldn’t repel. As the field hit the 3/4 in 1:21 1/5 and Clear Vision took over with challengers in pursuit, J K Endofanera appeared in nowhere man’s land buried on the rail, but Miller cleverly steered him into the two-path coming off the turn and began to weave through traffic.

As All Bets Off ranged up and looked briefly like the winner, Miller managed to swing J K Endofanera to the middle of the track at which point it was clear that he had the most horse and the momentum. In an instant they blew by the leaders and sprinted away to a clear 1:48 4/5 victory with the winning driver waving to the crowd in the win photo. Miller commented on his obvious jubilation. “It’s a race I always wanted to win!” he exclaimed. All Bets off was 2 1/2 lengths back in 2nd and Clear Vision finished 3rd, 3 3/4 lengths in arrears of the winner.

Miller noted that winning trainer Jimmy Takter, who had taken over training the colt at the beginning of July had been telling him that he has been very high on the millionaire son of Art Major. “Jimmy just got this horse a few months ago and he’s told me all along that this horse is the real deal and we know that – he won the North America
Cup for the Burkes,” Miller remarked. “But since Jimmy’s had this horse he’s said I expect big things from him, and he showed it tonight. This is a race that I’ve always wanted to win!”

J K Endofanera paid $6.40 to win and combined with All Bets Off for a $38.60 exacta payoff. Combining those two with third-place finisher Clear Vision in a trifecta wager returned $327.60.