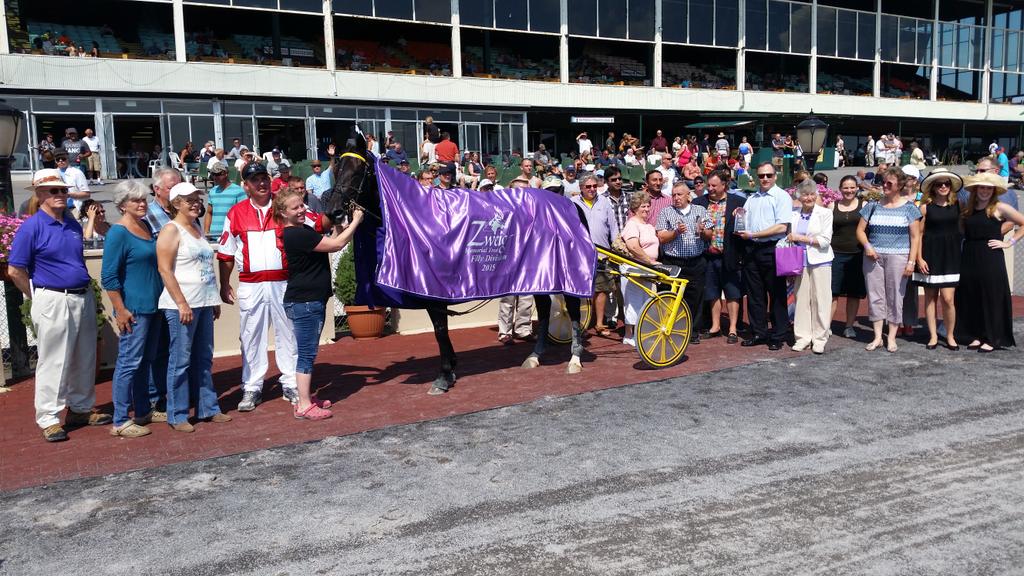 “We’re going (to the Hambletonian),” said Burke. “The plan has always been to go as long as she was good and today at Vernon she was as good as she has ever been. She had to be super and she was.”

In the Hambletonian, she will face, among others, Pinkman, the winner of yesterday’s Zweig for males for trainer Jimmy Takter. Gingras is the regular driver of both Mission Brief and Pinkman and will have to chose between the two.

The decision to gin the Hambo could not have been an easy one for Burke, who, moments after the race said he was “really torn.” Prior to the Zweig he seemed to be leaning toward racing his filly in the Hambletonian Oaks because she was not showing the razor sharp form she displayed at two. Burke had said that a back problem was keeping Mission Brief from racing at her very best.

But that didn’t seem to be an issue yesterday as she won by two lengths over Wild Honey in 1:51.4 in a dominant performance that was reminiscent of some of her scintillating 2014 races.

“She’s back,” Gingras said. “Every other week she would throw a step here or there throughout the miles. Today, she didn’t do any of that. She was really solid.”

When asked if Mission Brief was back at her very best, Gingras replied: “I would say so. She didn’t go as fast as she has, but she didn’t have to. It’s her first good performance this year when it comes to being as solid as can be. Hopefully she can build on that.”

Gingras said the work that the Burke crew has been doing on the filly’s back has paid off.

“She’s sounder now,” he said. “They figured out about three weeks ago that they needed to work on her back and everything else has come from that. The main problem was her back. They’ve done different things with her, including working with chiropractors. They’ve been working hard on her and it is definitely working.”

Burke said that in the end he couldn’t resist the chance to make some history. The last filly to win the Hambletonian was Continentalvictory in 1996.

“If we win this race, it will change our lives and it makes her career,” he said. “I know the Oaks is $500,000 and she would be odds-on to win that race, but it wouldn’t change our lives. Winning The Hambletonian changes lives.

“It will be great for the sport. To have a filly like this trying to beat all of Takter’s horses. This will be a great story. I think we have the filly to do it. If I am wrong, I’m wrong and I have been wrong and criticized before, but I really think she can do it.”

Gingras did not make a commitment to either horse yesterday before boarding a plane for Sweden, where he will drive Maven Tuesday at Jägerso. It is possible that Gingras could stick with both horse through the heats and not make a decision until the final. As for Takter, he didn’t seem concerned about who would drive Pinkman.

“I don’t know what Yannick will do,” he said. “It is his call. Pinkman is not a difficult horse to drive. There are a lot of good drivers out there who will want to drive Pinkman if Yannick doesn’t.”

Takter, who drove the winner of the Hambletonian last year, said he is not a candidate to drive Pinkman.

As far as Pinkman goes, his showing in the Zweig for males was a case of more of the same. The gelding by Explosive Matter never takes anyone’s breath away or shatters any stop watches. He just wins. Yesterday’s win was his sixth this year from seven tries and he is 12 for 15 lifetime.

There was, however, a new wrinkle to this race. Pinkman normally gets quickly to the front and dares anyone to catch him. Yesterday, once he got to the lead he yielded and allowed stablemate Canepa Hanover to go to the front. Canepa Hanover was driven by Takter, who admitted the plan was to force Pinkman to get a two-hole trip. A little versatility might come in handy down the road.

“I wanted to get Pinkman to race behind Canepa, to race from the hole,” he said.

Canepa Hanover still led at the top of the stretch, but Pinkman had no problem scooting past him on the inside to win by three-quarters of a length in 1:52. Canepa Hanover was second and Workout Wonder finished third.

“What makes this horse special is his consistency,” Takter said. “It’‘s not like you ever say, ‘wow, look at this horse.’ But, hey, it will take a hell of a horse to beat him.”

Takter’s Uncle Lasse was fifth and he also finished sixth with Whom Shall I Fear. Takter said her will enter five horses in the Hambletonian–Pinkman, Canepa Hanover, Uncle Lasse, The Bank and French Laundry.

Takter is in a similar position to last year when he had strength and numbers, starting the three top horses in the race. He won it with Trixton. The only difference this year is that there wasn’t a challenger like Mission Brief in last year’s field.

“I feel very good about the Hambletonian,” he said. “I have five solid horses going into the race. I think we’ll have a very good chance.”

Waiting in the wait at the Hambletonian will be the Ake Svanstedt trained Centurion ATM, who put in a remarkable effort in the Stanley Dancer to finish second. But all eyes come Aug. 8 at the Meadowlands will be on Team Takter and Mission Brief in what could be one of the most interesting showdowns in the race’s history.