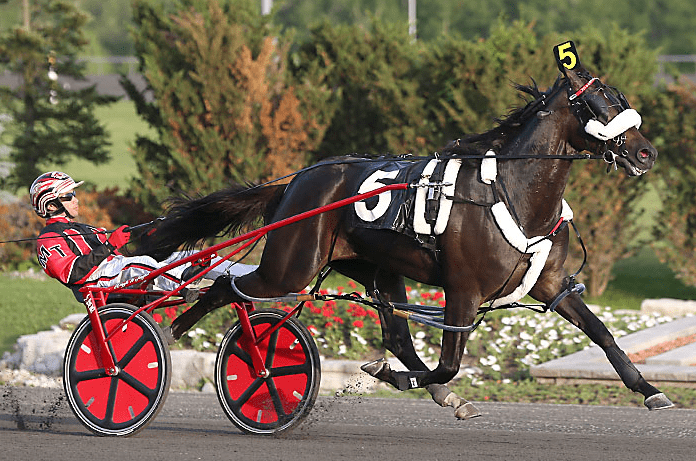 CAMPBELLVILLE, ON – This much is certain: Wiggle It Jiggleit will face the toughest competition of his career in the $1 million North America Cup this Saturday at Mohawk Racetrack for sophomore male pacing colts, but he’s going into it fresh, fit and full of himself.

The much-heralded gelding by Mr. Wiggles won by six lengths in a snappy 1:49 2/5 in his $50,000 elimination race Saturday night at Mohawk Racetrack, but it didn’t appear as if he really tried. He was fluid and fast.

Sent postward at 1-9, Wiggle It Jiggleit went to the front with driver Montrell Teague and simply left the seven others in his wake, setting fractions of 26 2/5, 56 3/5 and 1:23 3/5. He led by four at the top of the stretch and extended it without even been asked.

“He does all on his own, I’m like a passenger,” Teague added. “Whatever he wants to do, I gladly let him do it. I had to put him on the front because I wanted to go a good mile and I didn’t know if they would get me there on time and all that good stuff. I’m telling you he’s better off the pace and if it happens in the final, I’m fine with it.

“It’s just exciting to race him every week, and as it gets more competitive that’s what you always like. You’d rather take the money and not be competitive, but it’s more fun doing it like that and you never know how fast you can go.”

Owned by George Teague and trained by Clyde Francis, Wiggle It Jiggleit is now 10 for 10 on the season. He is undefeated in 11 career starts.

“He got nice, soft fractions to the front and everything went his way,” George Teague told HRU. “It was a good race. I’m sure next week it will be a lot different race and he’ll have to step up to a different style. And I think he’s able to do that. Every time you ask him to do what he does, he’s always doing it. He’s very willing and he’s pretty versatile.

“How fast can he go? I don’t know. I hope we don’t have to find out any time soon. I just hope we keep winning. I’m not necessarily worried about the speed. But he’s pretty fast.

In The Arsenal, driven by Brian Sears for trainer Kelvin Harrison, is now undefeated in four starts this season. The American Ideal colt is owned by breeder White Birch Farm and In The Arsenal Racing.

Harrison said he was going to put goggles on his horse because he felt the bright lights of the tote board caused him to bear out in the final of the Rooney.

“I was worried because it was a little bright (tonight), but he was safe,” Harrison said. “He did it kind of well. He was like a safe winner. The big thing with my horse this year is he’s not being very flashy. He’s getting it done, but he’s just getting it done. That’s how much he’s matured. Last year he wouldn’t have got things done because he was wild. But he’s a lot smarter. I like his chances (in the final). He’s the real deal.”

The third division saw Artspeak, last year’s champion two-year-old colt pacer in the U.S. driven by Scott Zeron, finish second by 1¾ lengths as the 3-10 favorite to Wakizashi Hanover. The gelding by Dragon Again was driven by Tim Tetrick and won in a lifetime best of 1:49 2/5.

Artspeak made a move from back of the pack, similar to what he did last time out winning a New Jersey Sire Stakes race, but this time he was outsprinted to the wire. Wakizashi Hanover, who was second in a Pennsylvania Sire Stakes race in his last start, finished strongly to beat the champion.

“I tell you what, that other horse turned speed a little quicker and that’s all it came down to because I was pacing as fast as he was near the wire and he outshot me in that last turn when he fired wide,” Zeron said. “His horse turned some 24-second speed. I was smoking and he came over top of me. His horse was impressive, but I take nothing away from mine. I’m not worried about it for the final, either, I just hope I draw well.

“I respect all those horses in there. I know what mine’s capable of. Evidently on the track it looked like it was a decent trip, but out there it didn’t feel like it because it was stop, start, stop, start. My horse likes to carry speed all day. I had to slow him up in that last turn and go from a 28-second quarter to a 26-flat. It took him a little bit to get into gear today. We just got outpaced for one step on that last turn, and that was it.

“The main thing is (trainer) Tony Alagna is not worried and I’m not worried. We got beat in the elimination. If we win for $1 million, I don’t think anyone is going to remember the elimination.”
Alagna said his colt wasn’t as sharp as he had been previously.

“That other horse came off his back and sprinted really hard and Scotty said he couldn’t sprint with the other horse,” Alagna said. “That’s a horse a lot of people don’t know, but he’s a pretty nice horse.

“I think our horse lost a little weight shipping up and I think being up here this week getting ready for the final he’ll be that much better for next week, so I’m not concerned about him at all. We’ve got to wait and see what happens (with the post position). We can’t control that.”

Tetrick said he knew if he could get anywhere close his horse would finish strongly.

Rock N Roll World set the early pace with an opening quarter in 26 3/5, pressed by Split The House, who came into the race undefeated in four lifetime starts. Betting Exchange took over and led through a half in 54 2/5 and three quarters in 1:22 4/5, hounded by Split The House. Wakizashi Hanover was moving rapidly at that point, passing Artspeak at the top of the stretch.

Wakizashi Hanover is owned by the Tri County Stable of Truro, Nova Scotia, a group that includes Bruce Kennedy, Percy Bonnell, Wayne Burley, David Bugden, David Chabassol and Doctor Scott Bowen. He was purchased for $23,000 as a yearling and has earned almost $200,000 in his career.

The horse is trained by Joann Looney King and her husband Jim, who have a long association with Kennedy, who is the most experienced horse owner in the group. He said the horse did well enough last year in six starts to impress Tetrick, who thought the gelding could race in 1:48 as a three-year-old.

“When I met Tim Tetrick in the winner’s circle, he just said, ‘Bruce, he was awesome and I think he’s a better horse yet.’ I have all the respect in the world for these kind of guys. They’re good to ask in that they don’t know us. We have a horse that they respect and honor. These guys make their money by winning and we think that’s the best formula for an owner/driver relationship. If you horse is good, everybody is going to do good.

“Upsets? That’s what harness racing is all about.”

The top three finishers in each elimination qualify for the final. Hurrikane Ali got the last post in a random draw of the fourth-place finisher in each division. Split The House is first on the also-eligible list.

The draw is on Tuesday, and the connections of each of the winners will pick their own starting posts.