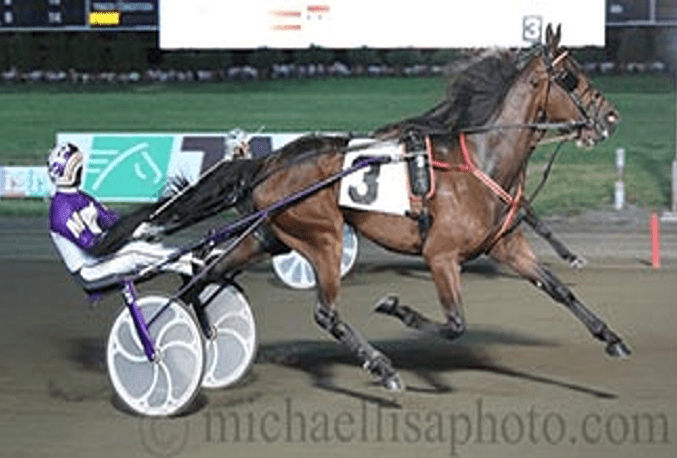 He looked like the biggest cinch since American Pharoah in the Belmont Stakes, but 1-9 shot Father Patrick came up short last night in the Graduate Series at the Meadowlands, losing to JL Cruze.

Father Patrick is trained by Jimmy Takter, who didn’t come home empty as his super mare Shake It Cerry won the other division of the Graduate for trotters. In the pacing side of the series, which is restricted to 4-year-olds, trainer Steve Elliott ruled the day, winning both divisions, one with Rockeyed Optimist, the other with Doo Wop Hanover.

Coming off a sensational win in his 4-year-old debut in the Maxie Lee over Bee A Magician, Father Patrick came into this race with an air of invincibility. The bettors were so enamored with him that they sent him off at 1-10.

As it turned out last night, he simply wasn’t good enough. After sitting fifth in the early going, Yannick Gingras brushed to the lead with Father Patrick and took control by 1 3/4 lengths after three-quarters had gone in 1:24.1. The race looked to be over at that point, but JL Cruze and driver Dave Miller were not about to give up. Despite drifting out in the stretch, JL Cruze caught and passed Father Patrick a few feet from the wire to win by a neck in 1:51.

“When he came out of the hole he had a lot of trot but he was just drifting out a bit,” Miller said. “Instead of fighting him, I let him drift and he trotted a big last quarter.”

JL Cruze is trained by Eric Ell and his regular driver is John Campbell, who was at Mohawk last night to drive Go Daddy Go in the Somebeachsomewhere.

It was a huge win for J L Cruze, who, just a few weeks ago, was battling foot issues that cost him an appearance in the first round of the Graduate. The 4-year-old gelded son of Crazed had been a terror during the winter months at the Meadowlands, but he had never faced a horse anywhere near as good as Father Patrick. With last night’s victory, which was a case of winning fair and square, he made a statement that he can compete with the very best in the male trotting ranks.

The Takter stable did not disappoint in the first of two legs of the Graduate for trotters as Shake It Cerry was an easy winner over males in 1:51.4. Gural Hanover was second. Trainer Takter was in the bike for the win.

Shake It Cerry got off to a slow start this year, losing her first three. Takter said the problem was that they were trying to breed her to Father Patrick through an embryo transfer, which did not work and threw her off her game. She has now won two straight.

“She had excuses her first few starts,” Takter said. “We tried to get a foal out of her and messed up a little bit with her hormones. I’ve been driving her, this was the third start in a row, and last time she really swelled up good. That was a good sign. I think she is pretty close to where she is supposed to be right now.”

It was all Steve Elliott all the time in the Graduate races for pacers.

He started his night with a win by Rockeyed Optimist, who scored a mild upset over last year’s North America Cup winner JK Endofanera to win by a length. Tim Tetrick handled the driving duties. Like JL Cruze, Rockeyed Optimist had been a wintertime star at the Meadowlands but was untested at this level. He’ s now 9 for 10 on the year.
Elliott struck again with Doo Wop Hanover, who won by three-quarters of a length over All Bets Off. Tetrick filled in for regular driver Campbell.

“He’s a nice horse and he proved that last week at Tioga,” Tetrick said. “Today, we got a good trip, second over. It was a tough battle to the wire, but he is a nice horse. John (Campbell) did warn me. He said don’t get him started up without having a place to go. I just did what he said. It was best for the horse and it worked out perfect.”

The Graduate series for both trotters and pacers resumes June 19 at the Meadowlands.