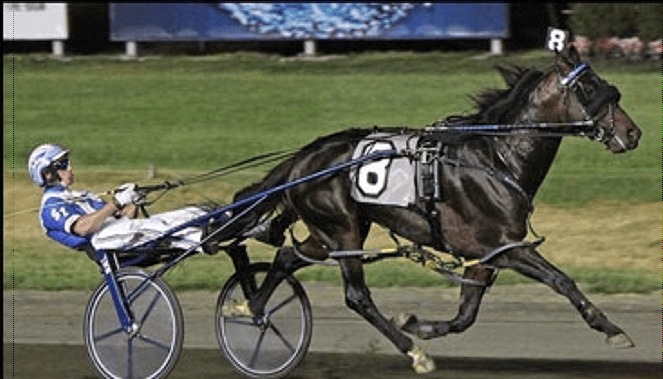 EAST RUTHERFORD, NJ – Artspeak and Mission Brief, both champions last year, pulled off victories last night at the Meadowlands in $100,000 New Jersey Sire Stakes race, but what a contrast in the way they did it.

Artspeak did it spectacularly easy with a breathtaking performance, making a brilliant move down the backstretch. Mission Brief struggled throughout even when leading and had to fight back after surrendering the top in the stretch drive but still managed to hold on.

Artspeak, a son of Western Ideal out of the Artsplace mare The Art Museum, started from the eight post in the field of nine, and regular driver Scott Zeron showed patience at the start of the race to settle into fourth. Gokudo Hanover, driven by John Campell for trainer Douglas Hamilton, blasted to the front from the sixth hole through an opening quarter of 26 3/5 with a brief lead over Hurrikane Ali, the 8-5 second choice in the field driven by Yannick Gingras. At that point, Artspeak was fifth by eight lengths.

Hurrikane Ali made a move to overtake Gokudo Hanover, but Zeron had already pulled out and was making a sweeping move that had the colt second by three quarters of a length after a half in 54 3/5. And there was simply no stopping the 7-10 favorite, who reached the three-quarter mark comfortably in 1:21 3/5, leading by two lengths and three and a half lengths at the top of the stretch. Zeron had the horse all wrapped up at that point and coasted to a three-length win in 1:48 4/5.

“It felt like I was way too far back,” Zeron said of the opening quarter mile. “It was in a bad spot, but they floated up up front and Artspeak just wanted to get there. That (move) was pretty vicious. He did that all on his own and stayed on the bit and from then on out it was pretty easy. We were pretty wrapped up with the plugs in. He was very professional at two, but he’s just stronger, faster…I just love the horse.”

Trainer Tony Alagna said after the race that he and the connections would talk about the horse’s next start, and while he suggested they will likely bypass next week’s Somebeachsomewhere Stakes at Mohawk and go right into the North America Cup eliminations on June 13. It’s similar to the route Alagna took with Captaintreacherous, who was owned by almost the same partners that own Artspeak.
Alagna marveled at the colt’s speed.

“He’s more like a sportscar,” Alagna said. “I always tell people it’s like stepping on a gas pedal of a sports car.

When you ask him, he’s gone. Captain could get into gear, and he’d stay in gear forever. He’s not been tested yet, but he will be.”

Marvin Katz, one of the owners of the colt with Brittany Farms, Joe Sbrocco and The Gym Partners, was absolutely taken aback by the colt’s latest win.

“He made that eight or 10 lengths up just in a heartbeat,” Katz said. “It was a spectacular move down the backside, of course, against good horses. That’s serious speed. This horse has incredibly high speed. It’s very, very rare. Was it the best race? I still have to go with the Metro and the Governor’s Cup. Those are big, important victories. I’m still going with those, but in terms of impressing me? He’s impressed me many times. He’s clearly identified himself as a horse that’s come back and is one of the main players, for sure.”

Katz pointed out that Zeron was using a slightly different bike than the one he normally uses because of the colt’s powerful stride.

“His gait is so big and he drives off the back so hard that he was hitting the bike (in his season-opening start),” Katz said. “Tony got a longer bike for him because his gait is just so big. He’s just covering so much ground with each stride, Tony got the same type of bike Scotty uses but a bigger one.”

Katz said the reason why Artspeak may skip the Somebeachsomewhere is because of the intense schedule that the colt will likely have this year after a patiently-managed two-year-old campaign, almost similar to Captaintreacherous.

“It’s a really intense schedule leading up to the Meadowlands Pace. They could literally go every week for almost two months straight,” he said. “You can’t do that, so you have to try to get some breaks in when you can. The partnership will discuss (the horse’s next start) and make a decision, but I would think Tony is leaning to staying home. It’s important to do what’s in the best interest of the horse. Giving him some breaks in the early part of the year will hopefully pay some dividends as the year goes along. Plus, he raced last year in the Metro, so he’s familiar with the track. He’s been over the surface. Scott knows the surface. Tony knows the track. We wouldn’t need that start, whereas in some instances when a horse hasn’t been over the track you have to try to get him over there once before that.”

Mission Brief, last year’s champion two-year-old filly trotter, started furthest out in the field of 10 and Gingras let her find her stride while crossing over to the middle.

Marion Millionair, an 18-1 long shot who had the rail, set the early pace with an opening quarter mile of 28 4/5. Gingras, who had his horse second by 1¼ lengths, grabbed the lead and had a two-length advantage after a half in 58 2/5. But Model Behavior, a 28-1 outsider driven by Tim Tetrick, was making a serious move at the 1-5 favorite and led by a nose after three quarters of a length in 1:27 1/5. Model Behavior increased the lead to a head in the stretch, but Mission Brief stayed strong and flat and passed her challenger on the inside to win by a half length.

Mission Brief, trained by Ron Burke, who owns the fabulous filly with Our Horse Cents Stable, Jerry and Theresa Silva and Weaver Bruscemi, won in a time of 1:54 3/5, finishing the final quarter of a mile in 28 4/5. Model Behavior placed second, followed by Riley’s Dream. Mission Brief, with her second consecutive win of the season and 11th in 15 lifetime starts, collected $50,000 to raise her bankroll to more than $653,000.

“Warming up she actually felt pretty good,” Gingras said. “In the race, you know she’s not 100 percent. Now we’ve got a month and Ronnie can try a few things with her and see what’s going to work.

Honestly, that’s as fast as I could go. She didn’t feel like she was liking it too much. Timmy got a head in front of me, but I knew if she’s still trotting in the stretch she’s going to win the race. I was patient with her, let her settle. She’s so much more mature. I can race her any which way I want to right now. I can race her out of a hole, out of cover, but the way it’s been going right now. It’s a lot better to let her relax and get her gait straight. That’s the biggest problem.”

The filly is not scheduled to race for a month. The big question is whether she will be entered against the boys later in 10 weeks time for the Hambletonian.

Canepa Hanover, a half-brother to 2006 Horse of the Year Glidemaster, raced a monster mile in a $100,000 NJSS race for three-year-old male trotters, stopping the teletimer in a swift 1:51 1/5, stamping himself as a serious contender for the Hambletonian.

Driven by Gingras for trainer Jimmy Takter, who is in Sweden for Maven’s race in the Ellitloppet, Canepa Hanover made an early move for the lead from the four hole and was never headed, setting fractions of 28 for the opening quarter mile, 56 2/5 for the half and 1:24 through three quarters. With every step he took, Canepa Hanover simply drew away from the field, finishing the race 3½ lengths to the good. French Laundry, also trained by Takter, finished strongly for second, while Aldebaran Eagle finished third. Canepa Hanover, third choice in the field at just over 5-2, paid $7.40, $3.40 and $2.40. French Laundry paid $3.20 and $2.20, and Aldebaran Hanover paid $3.60.

The win was only the second in 10 lifetime starts for Canepa Hanover, who has banked less than $100,000. He was purchased as a yearling for $300,000 and is owned by Katz, Brittany Farms, Al Libfeld, Sam Goldband, Brixton Medical Inc. and Christina Takter.

Canepa Hanover raced only six times last year, winning once and finishing second in another. Takter practiced patience with the colt, and had the owners’ full backing.

“Before Jimmy left for Sweden, he told me he had this horse as good as he could be,” Gingras said. “He got a little playful in the stretch, so I popped the plugs just to give him a reminder and he found another gear…This horse is ready to rock right now. It’s just a matter of getting him a little bit better and having him ready in 10 weeks.”

Katz, still in awe of Artspeak’s race earlier in the card, was equally impressed with Canepa Hanover.
“Jimmy liked him a great deal training down as a two-year-old,” Katz said. “He was very high on him. He won early as a two-year-old and showed devastating ability. He just wasn’t mature enough. He’s a big colt. To Jimmy’s credit, he stopped early with him without beating him up. He kept him on his farm and started back with him and has always felt this horse has a ton of ability. He was very high on him, and by mid-winter he spoke glowingly of him. He qualified him in 1:52 2/5. You don’t qualify trotters in that time unless they are exceptional. It’s a tribute to Jimmy’s talent and experience and skill as a trainer.

The plan was for Jimmy to drive him all along like he did with Trixton (last year’s upset winner in the Hambo). Jimmy called it the Trixton program. He’s been on a very similar program. The fact Jimmy was driving him was just to make sure he knew what he was doing on the racetrack and could be protected when necessary. He clearly came to race tonight. Obviously.”

“It’ll all take care of itself,” Katz said.

Katz was also proud of the effort of French Laundry, whom he and Libfeld bred and own with Christina Takter and Jim and John Fielding. French Laundry won seven of 12 races last year and more than $300,000 and was victorious in his season opener.