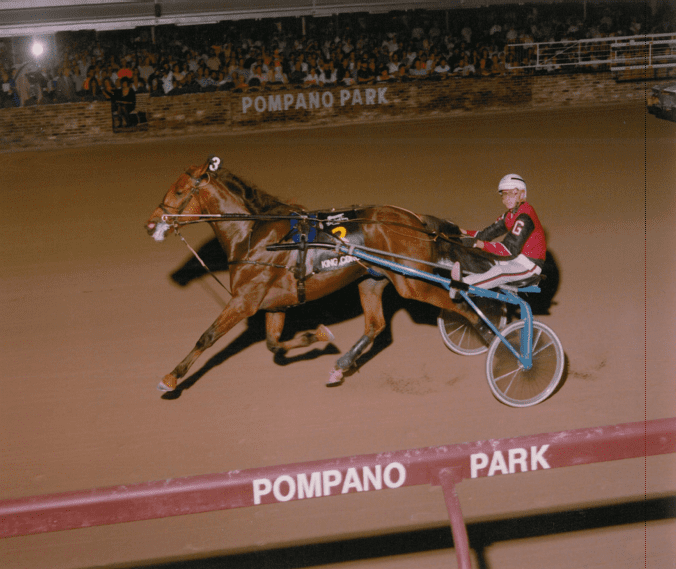 Though Luck was Never on His Side, Bill Gale About to Become a Hall of Famer

INGERSOLL, ON – Like a song by Frank Sinatra, Bill Gale has regrets, but too few to mention.

The 66-year-old Toronto native could have potentially been one of the greatest drivers in the sport’s history were it not for injuries that forced him to retire 20 years ago.

Ask racing fans and horsemen to name their top-10 list of the all-time best drivers and Gale’s name is frequently mentioned. He drove 6,401 winners and his horses earned more than $42 million in purses. Between 1982-1997, he racked up annual earnings of $1 million or more. He won three Breeders Crown races and piloted some quality horses overall. He was voted the top driver in Canada in 1991, when he set a career mark with more than $3 million in purses, highlighted by two wins in the Breeders Crown – with Three Wizzards, who won the Three-Year-Old Colt Pace, and King Conch, who set a world-record time on a five-eighths mile track in the Two-Year-Old Colt Trot.

He will be inducted into the Canadian Horse Racing Hall of Fame in August. He had been eligible for the Hall of Fame twice before and had been passed over, making him feel like it would never happen.

It is interesting to recall Gale’s career in the context of Mike Lachance’s decision in recent years to cut back on his driving schedule. Lachance, a Hall of Famer in Canada and the U.S., turns 65 later this year and has been able to dictate his future on his own terms. He has been free of injuries for the most part in his career, and told Harness Racing Update last week he doesn’t want to risk his health, having done everything he’s wanted to and preferring to spend time quality time with his grandchildren.

“As far as feeling cheated out of anything, no,” Gale says, speaking in the living room of his home in Ingersoll, just outside of London. “I had a great career and that’s just the way life is.”

Gale was a big star in Windsor, driving first call for star trainer Bob McIntosh. In the 80s, Gale decided that rather than drive in every race at Windsor, he could opt for quality starts driving McIntosh’s stakes-caliber horses on the Greenwood/Mohawk circuit.

He won the Breeders Crown Two-Year-Old Male Pace in 1986 with the McIntosh-trained Sunset Warrior, who defeated Redskin. He was the second-best in the division behind the undefeated Jate Lobell, who was ineligible for the race. Sunset Warrior was basically a fresh horse that raced in Ontario, but he won a stakes race at Yonkers as a tuneup for the Crown. The race split into two divisions with the top four in each advancing to the final. Sunset Warrior finished third in his heat to Redskin and beat the 3-10 favorite in the final by three-quarters of a length in a thrilling stretch drive. It became the race that vaulted Gale from a good driver in Canada to one of the best in North America.

In the fall of 1990, Gale and McIntosh parted ways.

“Bob and I kind of divorced as a trainer/driver combination,” he says. “We weren’t married to each other. It was a business decision on Bob’s part. As a driver it’s never easy to accept it, but I did. He made a business decision that he was not going to use me on his horses anymore. He didn’t think I was doing a good enough job, and I kind of got that feeling, and once I had it I started overdriving. He was right at the end. I was driving his horses bad. He made the right decision. All my options were open. I wasn’t’ basically obligated to anybody.”

But his fortunes were about to change. In the spring of 1991, he went to Toledo to race in the Grand Circuit and was listed to drive a horse, BJ’s Mac, a two-year-old colt trotter trained by Per Eriksson. The horse would go on to do extremely well, winning the Haughton Memorial. Gale also picked up the Eriksson-trained King Conch, another two-year-old trotting colt, and after a race leading up to the Crown, Gale suggested some equipment changes to relax the aggressive colt. Eriksson changed the bridle and added some ear plugs, and the colt romped in the Breeders Crown, winning by 8½ lengths, and set a world record for his division on a five-eighths mile track with a time of 1:56 2/5.

“I never moved a hand on him,” Gale says.

He also scored an upset win with Three Wizzards, who scored a two-length victory, knocking off the heavily favored Die Laughing and Artsplace. The horse was trained by David Elliott for a trio of Detroit-based owner.

Gale’s career was taking off, but then he ran into a series of injuries. The first one happened on October 28, 1997 at Mohawk in which he suffered a tibial plateau fracture.

“It was like someone had taken an axe and chopped that leg off an inch and a half below the knee,” he says. “It drove everything up through the knee and blew everything completely out.”

He would be surgically outfitted with an illizarov apparatus, which is circular fixture made of stainless steel of titanium rings that is affixed to the leg using stainless heavy gauge wire. It is designed to help the bone and soft tissue regenerate in a reliable and reproducible manner. He returned on April 25, 1999 and won first time out.

On July 1, 1999, he drove a two-year-old gelded trotter called Botany Bay, who broke his maiden in his first start and rattled off three more consecutive victories. Overall, the horse won seven of 12 starts, including the Champlain Stakes, almost $400,000 in earnings and was voted Canada’s top two-year-old male trotter.

“I was lucky I got him to drive because when you’re away for that long it’s like starting over,” he says. “As soon as you lose a race that somebody thinks you should have won, the obvious thing that people say is ‘he’s scared, driving passive.’ I don’t think I was ever scared.”

In March, 2000, he suffered the second major injury of his career, cracking his pelvis, and was off for about a year.

He would suffer a third injury, this time in December, 2002, in a training accident, snapping the surgically repaired leg in the middle and was put in a cast for six months. The leg didn’t heal properly, so the doctor who did the surgery told Gale he could walk with a cane for the rest of his life or choose to have the leg re-broken and casted again.

Gale went back to the doctor who did the first surgery for a second opinion. He did X-rays and gave Gale the same options, but presented a third one which would be re-breaking the leg and placing it in the same apparatus that had been used in the first surgery.

Gale chose the latter option – “it was a no-brainer for me” – and the leg healed properly.

During his career, he had a chance to race against his son, Jason, who drove for awhile.

“It was all right, I guess,” he says with a laugh. “I think the first race I ever raced against him he parked me to the half.”

On April 25, 1997 at Windsor, the track he once dominated, Gale drove for the final time.

“I wasn’t getting many drives at that point, so it wasn’t a real big decision to quit driving,” he says. “The writing was on the wall. All of a sudden instead of driving six or seven a night, you’re driving two or three. That’s the nature of the business. The young guys coming up push the old guys out.

“It changed my lifestyle. I had disability insurance for the first accident, but you can’t have two claims within two years. I had no insurance for about two or three years after that.”

He trained some horses after retiring, mostly homebreds that he and his wife, Janice, owned, but didn’t have any luck.

“They were always within an inch of the ones that made all the money,” he says. “The last one I had, a filly called Tanned For Life, I thought she was really good, but she just had horrible luck. She was just so close so many times. Finally, we ended up selling her and thought ‘the hell with it.”‘

He and Janice moved from Windsor to their current home to be closer to their children and grandchildren. Gale is living relatively physically comfortably now and life for the most part is good.

“The thing with me is I’ve lived with pain for so long, I’ve got a high pain threshold,” he says. “There are lots of days when I get up and I’m a little stiff. I’ve had back surgery (from earlier in my career) and I’ve got a compacted vertebra in the top of my back, but I can’t say anything really bothers me. The left leg gives me a little twinge that I notice once in awhile, but that’s life.

“I keep in touch with a few guys and watch the races on TV quite a bit. About this time of the year when big stakes race start, I watch the races a lot. Not being part of the game the way I am, you miss the camaraderie – the whole backstretch and the paddock. That’s probably the part I miss the most. Going to the drivers’ room and playing cards at night, or hopping on a plane with four or five guys to go to a racetrack and you’re playing cards on the plane, and on the way back you’ve having a few beers. But being right out of it, it’s hard. You get up in the morning and you have all day to do nothing.

“That’s kind of the part that is hard to accept,” he adds. “You find ways to put in the time, but basically for a guy who’s used to going seven days a week all of a sudden you get up in the morning and you don’t have to drive to the barn or do anything. You’ve got to find different things to occupy your time.”

Gale is grateful to be going into the Hall of Fame, saying any time you are recognized by your peers is as great an honour as you can get.

“It means am awful lot, especially when you think of the list of names you will be joining,” he says. “I’ve thought about a few things I want to say, but nothing earthshattering. I have some people I’d like to thank. Hopefully I’ll have it memorized and it’s not going to take very long. I’m not going to bore people to death.”