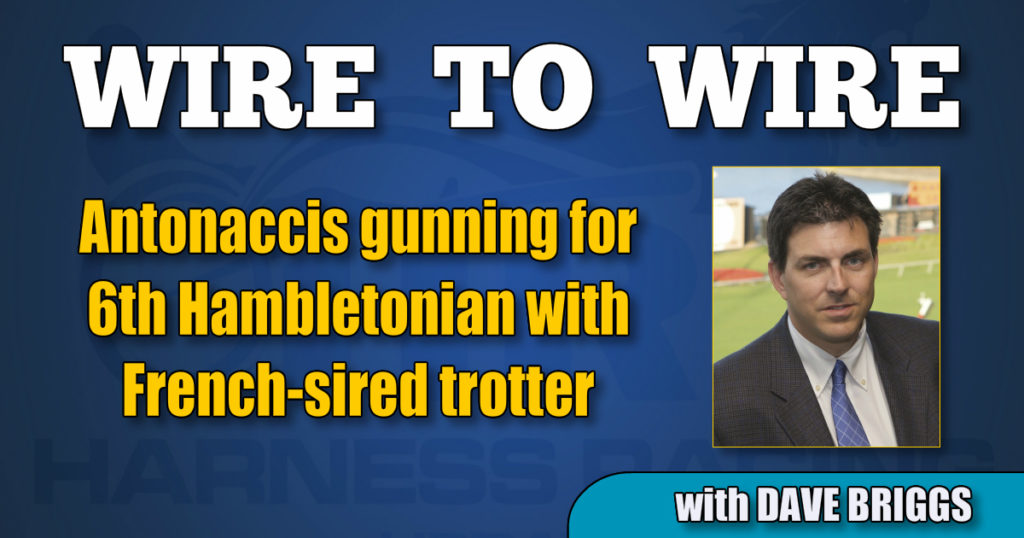 Winning a record sixth Hambletonian would be reward enough for the Antonacci family, but Ready For Moni’s breeding takes the story to whole new, international level.

Winning a record sixth Hambletonian as owners would be reward enough, but Ready For Moni will represent much more than an opportunity for the Antonacci family to enhance its incredible Hambletonian legacy when the trotter goes to post Saturday afternoon as one of the favorites in the $1 million final at The Meadowlands Racetrack.

The son of French stallion Ready Cash out of Nothing But Moni — a daughter of the famed Moni Maker — is the latest example of the Antonaccis’ attempts to produce a superior standardbred by combining European and North American blood.

Three years ago, a similar breeding effort by Ready For Moni’s breeder the Moni Maker Stable — the Antonacci clan and their partner David Reid — landed Moni Maker’s son International Moni in the Hambletonian. The talented son of French stallion Love You went off as the bettors’ second choice after winning his heat earlier that afternoon. But that was where the good news ended that day. International Moni was interfered with in the first turn and made a break that caused him to finish last in a race where even the first horse across the wire (What The Hill) was disqualified, elevating Perfect Spirit to the winner’s circle.

A year before that God-awful mess on our holiest of days — when International Moni was just a precocious 2-year-old — Frank “The Elder” Antonacci opined about what he and his partners were attempting to do by breeding quality mares to French stallions.

“It just makes common sense that if you can breed our horses to their horses, then possibly you could come up with a superior individual, considering they are two different bloodlines,” Antonacci said in 2016.

“I’m trying to add a little variety in the pedigree, so that a guy comes here and says, ‘Listen, I go and buy all these Muscle Hills and they’re all the same, but if I buy this horse and this is the only pedigree in America that might have this and this is a significant family that produces racehorses, I might have a chance to have a better horse.’”

Antonacci stressed such thinking wasn’t a new concept, just one that, to that point, had not been explored as much in recent history, especially during the long period when the French stud book was closed to mares from outside the country.

“It’s really not a new concept,” Antonacci said, referencing the fact that Jean-Pierre Dubois bred French mares to U.S. stallions such as Speedy Crown and Super Bowl to try to improve the French standardbred — the theory being that American speed with French endurance will one day produce a superior trotter. A great example of that logic is when Dubois’ son, Jean-Etienne Dubois, bred Super Bowl mare Armbro Glamour to French stallion Quouky and produced superstar trotter and sire Coktail Jet.

“All the heavy lifting has been done for us in that we need second and third generations of French-American cross-breeds so we get the cleaner gaited horses. You think it’s any accident that [full-sisters and Hambletonian Oaks champs] Ariana G and All The Time are from the same family as Workaholic? It’s probably the line in France that gives it all the speed.”

On this side of the Atlantic, International Moni and now Ready For Moni — who is owned by the Antonaccis’ Lindy Farms, along with John Fielding, Herb Liverman and Bud Hatfield and is pegged at 3-1 in the Hambletonian’s morning line odds — are likely the two most successful recent examples of mixing French and American blood.

Ready Cash, one of the pre-eminent trotting sires in the world and the sire of two Hambletonian starters this year — Back Of The Neck being the other — was the gold standard overseas even in 2016 for Antonacci, who around that time was starting to see positive results from breeding mares with frozen semen from the French stud. Just as Antonacci was talking with pride about 2-year-old International Moni and a breeding program he and Reid labelled The French Connection, Nothing But Moni was confirmed in foal with, you guessed it, Ready For Moni, whose feet first touched ground on April 5, 2017, four months exactly to the day before International Moni contested the Hambletonian.

That Ready For Moni is a grandson of the famed, beloved Moni Maker, who trounced the boys worldwide to the tune of nearly $5.6 million, makes the story even more of an international one.

That Ready For Moni is out of Moni Maker’s daughter and is trained by Nancy Takter, the daughter of Moni Maker’s trainer Jimmy Takter, makes the story that much better when the theme is trying to improve equine bloodlines over generations.

Despite the Antonaccis winning five Hambletonians with various members of their family — Lindys Pride (1969), Speedy Crown (1971), Probe (1989), Harmonious (1990) and Victory Dream (1994) — they and Reid are perhaps best known for campaigning Moni Maker around the world and relishing every second of it.

Antonacci said those jaunts across Europe certainly convinced him of the viability to mix French and U.S. blood.

“I think it just cemented the program,” he said. “You see that (European) horses are as good as our horses and better in some cases.”

Some 20 years after she stood astride the world, Moni Maker is gone and her son, International Moni, is already a popular sire whose first crop have hit the ground this year.

Saturday, The Moni Maker Stable hopes to further that legacy and be rewarded for its endless patience, a rigid commitment to excellence and, most notably, thinking beyond the confines of North America.