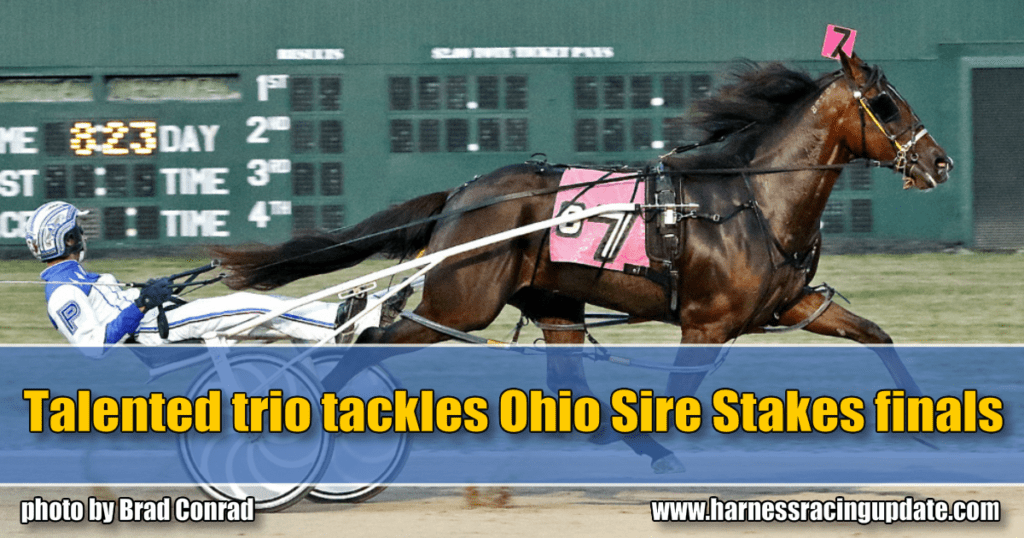 Nation’s leading trainer, Ron Burke, looks to pad his lead by sending out 11 pupils in the $2.4 million OHSS finals tonight at Northfield Park.

Trainer Ron Burke is no stranger to big chances in big events and with 11 starters in the eight Ohio Sire Stakes (OHSS) Finals Sunday night at MGM Northfield Park, Burke is looking forward to another big night.

Included in his roster of OHSS finalist are a trio of talented 2-year-olds — Elver Hanover, who is undefeated this season; It’s Academic, who swept the preliminary legs; and the world champion, Looksgoodinaromper.

“He just seems to do everything well. A couple of times he overcame tough trips and still got there. He seems to have a nose for the winner’s circle,” said Burke.

A $50,000 yearling purchase, the gelded son of Yankee Cruiser has earned $106,500 this season and has to overcome several outside posts to keep his winning streak alive. Elver Hanover drew post #2 in Sunday’s $300,000 final and Burke was excited to see his post draw luck change.

“Especially when Danny (Noble’s) colt (Ocean Rock) went that big mile last week. We definitely did not want to be starting too far behind him,” Burke said.

Elver Hanover was bred by Hanover Shoe Farm and their executive vice president/syndicate manager, Dr. Bridgette Jablonsky purchased a part of the gelding.

“I guess she just likes his personality,” said Burke. “He is like a big pet. She was worried that he wouldn’t be a good horse because he was a big pet. But that has never affected him.

“When we first started training him down he was just a little bit disinterested at points. He is a Yankee Cruiser and we already have a Yankee Cruiser stallion (Sweet Lou), so we went ahead and gelded him.”

In the 2-year-old colt trot, Burke will send It’s Academic postward as the morning line choice from post #4. The Uncle Peter colt has won five of six starts, the only blemish was a result of a break before the start in the Ohio State Fair Stakes on August 1 at Scioto Downs.

“I think as much as anything (the break) was because of the nine hole. The nine hole there at Scioto, for a young horse, they have to go right by the paddock. I think he thought about going into the paddock,” admitted Burke.

It’s Academic was purchased for $50,000 as a yearling by Burke Racing Stable, W. Donovan, Joe Sbrocco and Hatfield Stables from GBW Breeding Farm.

Rounding out the freshman trio is Looksgoodinaromper. Burke Racing Stable shares ownership of the Pet Rock filly with Weaver Bruscemi.

Looksgoodinaromper has improved in each 2019 start. She finished third in the first leg, second by a nose in the second leg and has rattled off three straight wins.

On Aug. 9 in the final OHSS leg, she came from off the pace to score a one length victory in 1:52.4 to establish a new Northfield mark and world record.

“Lookslikearomper looks like the best one of the three. She set a world record (at Northfield),” noted Burke. “She seems to do things that most horses don’t do.”

Lookslikearomper will leave from post #6 and was made the 3-1 second choice.

All three of Burke’s top 2-year-olds will be driven by Mt. Vernon, OH native Chris Page.

“Chris has done a great job with all the babies this year,” said Burke. “All three of my best ones are all versatile and can race from anywhere.”

Burke will also have six 3-year-olds completing Sunday night, but he is less enthusiastic with the chances of the sextet.

With a 16 race card and more than $2.5 million in purse money being distributed over the evening, Ohio Super Night will be the richest night of racing in MGM Northfield Park’s history. First race post time is 6:00 p.m. (EST) and the OSS Finals will be races 7 through 14.